Michael Cera and Kieran Culkin in This Is Our Youth. (Photographs by Michael Brosilow)

Roles that invite idiosyncratic acting are next to nonexistent so Michael Cera, the delightfully offbeat star of Superbad, Juno and Arrested Development, can count himself lucky he snagged one for his Broadway debut. In a revival of Kenneth Lonergan’s 1996 coming-of-age comedy set on the Upper West side, This Is Our Youth, he’s Warren Straub, a serious slacker of 19 on the brink of a bitter enlightenment called the Reagan era.

Mr. Cera has become the walking, talking definition of The Awkward Age, that bad patch of life’s highway that stretches from Adolescence to Adulthood, then off a cliff.

It’s a terrifying time for the millennial set, so perhaps he can be pardoned for taking the play so tenuously in nervous spurts and lunges. One critic in Chicago, where this cast and play were much admired, wondered if he’d turned inexperience into an art.

“It’s not quite clear,” wrote Variety’s Steven Oxman, “whether the physical awkwardness is due to a shortage of stage experience or a strong acting choice—he spends a lot of time with one hand in his pocket—but the lack of polish works for Warren.”

There are more specialties where that came from—a bashful smile, a certain off-centeredness, a benignly pixilated demeanor. All mask a ready access to emotions that suddenly touch you or physical comedy that throws you for a loop. He’s not all he seems. He’s more, and you shortchange yourself if you take Mr. Cera at face value. Tavi Gevinson in This Is Our Youth.

During a rehearsal break at the Cort, he settled his lanky and laid-back self into an aisle seat and immediately assumed the innocent air of a cherub who had stumbled onto the fast track and decided to go with the flow. He has been perfecting this passive persona since he was 9, and, by his own math, it’s taken him 17 years of acting to get to Broadway. Were Broadway a goal, he would have arrived much sooner, he admitted. “Just to work, and to work on projects I love with people I respect and appreciate—that’s the general idea that got me here.”

Kieran Culkin, his co-star in the play, would appear to head his people list. Mr. Cera called him “the epicenter of this project.” During the downtime while they filmed 2010’s Scott Pilgrim vs. the World, Mr. Culkin slipped Mr. Cera a copy of This Is Our Youth, and Mr. Cera’s reaction to Mr. Lonergan’s writing was instant and visceral. (Mr. Lonergan, himself a slacker-in-recovery, has also written the film scripts for You Can Count on Me and Gangs of New York.)

“Kieran had done the show 12 years ago in London, playing my character, Warren, and he wanted a chance to play the other role. Two years ago, we got a chance to do that in Sydney. They had a two-week slot and asked us to come and do the show.”

Down Under is certainly a discreet, out-of-the-way place to make a stage debut—if he failed, would you hear it?—but he actually liked it and wanted more. It has taken this long, but This Is Our Youth finally, officially opens September 11 at the Cort Theater.

“I’m learning it more and more. I don’t think I ever really got my head around it when we did it in Australia. It’s nice to have another opportunity. It’s much deeper than you can take it the first time you do the show, and there’s so much to bring to it.

“Stage acting is absolutely a different kind of muscle. Actually, what I really like about it is this practice of staying present. It’s nice when your work demands that out of you because I think it’s a good practice in life.”

It’s interesting that the longtime friends, who’ve been through much together, play longtime friends who’ve been through much together. “When you’re putting a show together, you kinda have to figure out your character and who you’re playing and what you’re doing and how you exist in your body in this character—and then try and forget about all of that and focus on the other person, get out of your own head and stop thinking about yourself and stay with the other person. That’s nice.”

Not that Dennis Ziegler, the character Mr. Culkin plays, is easily ignored. Given his blistering rants, he should have his friends fireproofed before entering his pad. Another affluent underachiever, he deals drugs out of a nice Upper West Side apartment his parents pay for out of gratitude that he doesn’t want to live at home.

Unfortunately, this is where Warren has come to crash after an ineffectual fling at college and being booted out of his own home by his abusive father. He comes with the shirt off his back, his treasured toy collectibles and $15,000 he stole from his old man. Over a joint the guys decide to use the money to turn a profit on a cocaine deal.

“When I first show up,” said Mr. Cera, “I seem to be like a real burden, a pain, but, as the play slowly develops, you start to feel the dynamics of the friendship. The real heart of the story is that friendship and why it is getting to a point where it can no longer sustain itself. Warren goes through a process of discovering self-respect. That’s a nice kind of character to live in for a few months. It’s good to put that into your body. I love that he’s presented at the beginning in a way you kinda write him off, and then you discover different layers of him. I love the way he is revealed.”

This is the part that put Mark Ruffalo on the map, mumbled mannerisms and all, when he originated it in a performance poles apart from Mr. Cera’s. Indeed, the show has become a rite of passage to legitimate theater for the Hollywood set, with Matt Damon and Jake Gyllenhaal, and Hayden Christensen and Anna Paquin in it at various points on the West End. The character of Warren is virtually a clarion call for a one-of-a-kind type of actor to do his own thing.

“Mark was so great, and Michael is so great, and they’re so different,” summed up playwright Mr. Lonergan. “It makes me feel very pleased with myself that the character can support two such completely different interpretations and still tell the story of the play … Not to be immodest, but when you hear a great standard sung by two really wonderful singers, it sounds totally different, but what they are both doing is bringing out something in the song that was already there.” 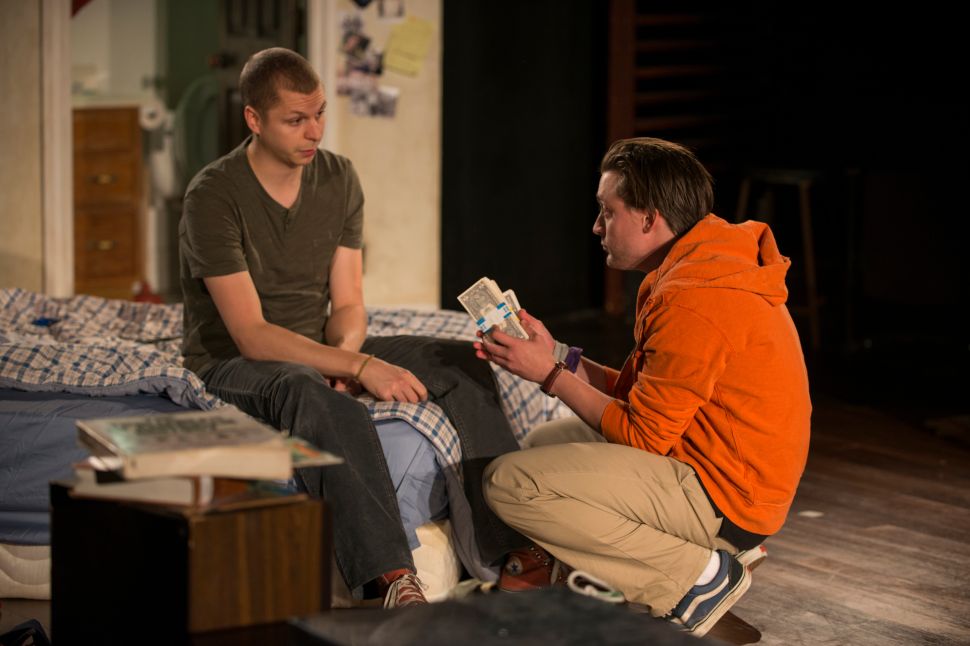 Filed Under: Theater, Michael Cera, Tavi Gevinson, Kieran Culkin, This Is Our Youth