Embattled Republican Congressman Michael Grimm boasted of his record as an elected representative at a candidate forum in Brooklyn last night–a forum at which his Democratic challenger, former Brooklyn Councilman Domenic Recchia, declined to appear.

Speaking at the annual Great Bay Ridge Debate, Mr. Grimm–who pleaded not guilty in April to 20 federal charges for allegedly hiring illegal immigrants at a restaurant he co-owed prior to his 2010 election–argued he had earned a third term representing the 11th Congressional District, which spans southern Brooklyn and Staten Island. The pol specifically cited his constituent services in the aftermath of Hurricane Sandy, his bills providing relief and delaying insurance cost hikes in the aftermath of the storm, helping keep a weapons of mass destruction response team at Brooklyn’s Fort Hamilton Army Base and assisting a woman being kept in Yemen against her will by her abusive husband in returning to the United States.

“It’s really one question: have I served you well or not? Do you think that the hard work that I’ve done every single day has answered the call, whether it’s Hurricane Sandy or flood insurance or a woman who was stuck in Yemen and the State Department gave up on her and even the United States Senate said we couldn’t get her back, Michael Grimm got her back to her father?” Mr. Grimm said in response to a question about his indictment. “I’ve moved mountains, I’ll continue to move mountains. I’ve done a lot, and there’s a lot more I’ll do.”

After a round of applause from the crowd, the congressman told the Observer that he has gotten the same positive response everywhere he has gone on the campaign trail.

“All over Brooklyn, all over Staten Island, the response has been tremendous. And I’ve got to say it, I’m blessed, I have a great constituency. They recognize I’ve put heart and soul into this job. And I’ve delivered,” said Mr. Grimm.

The elected claimed that Mr. Recchia had failed to appear at the event because he had been too lazy to brush up on key issues since announcing his bid last February. Mr. Grimm argued that alleged indolence and ignorance led to Mr. Recchia’s recent gaffes, such as when the Democrat was apparently unable to answer questions about key trade agreements and Mr. Grimm’s voting record, and when he said his overseas vacations gave him “great knowledge of foreign affairs.”

“He’s had over a year to run for Congress, he’s been a candidate for how long, but he’s never taken the time. And that goes to his work ethic,” Mr. Grimm said. “That’s the reason why he can’t beat me on game day; I work too hard.”

Mr. Recchia cited a “scheduling conflict” as the reason he could not attend the debate, to which organizers said they invited him in early August. The candidate refused to answer questions about what his plans for the evening were, and when he made them. 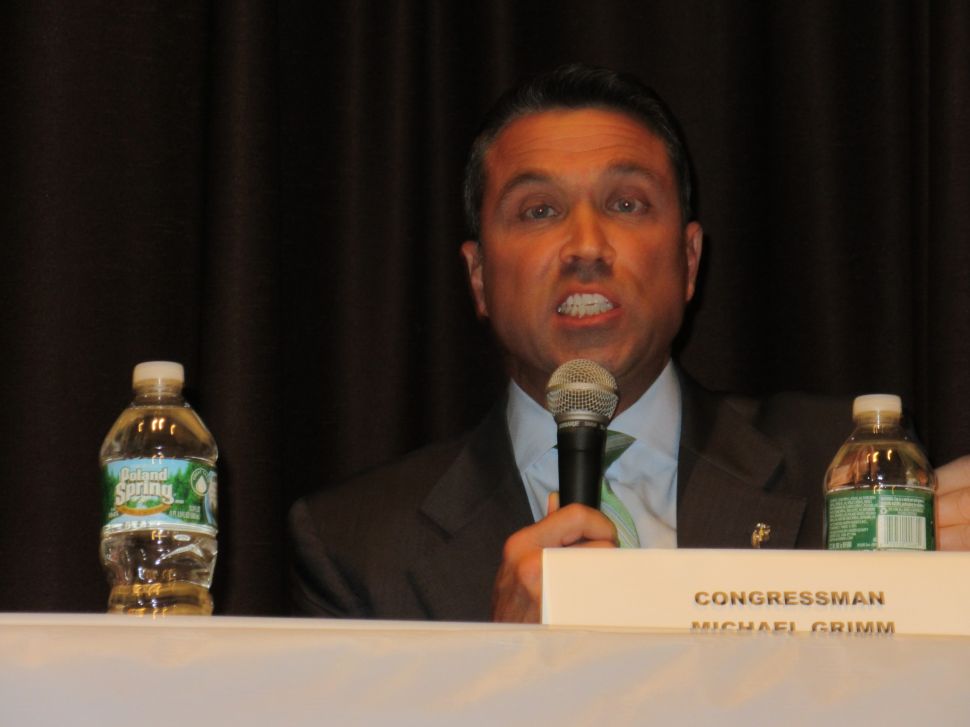