Humans have been watching videos to learn how to fishtail their hair and photoshop their heads onto others’ bodies for quite some time, but a recent study shows that we’re not the only ones who can learn this way.

A group of Brazilian marmosets learned to open boxes for rewards after watching how-to videos of other marmosets performing the same actions, Nature reports.

To start, a team of researchers taught two marmosets to either pull a drawer or lift the lid of a box in order to open it and obtain the treat inside. They filmed the monkeys doing so and later played the videos on a laptop screen placed in the same type of box on a tree branch in the wild. A total of 108 marmosets participated by watching either one of the two videos or observing a still image showing the instructor marmoset next to the box, which acted as the experiment’s control.

The majority of participating marmosets failed to open the box, but of those who did, almost 92 percent opened the box utilizing the exact same technique they were shown, presumably learning from the video.

Perhaps we can teach them to do the Harlem Shake next. 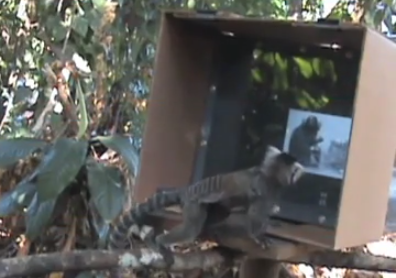