The flyer appeared in the Marlboro Houses, a predominantly black New York City Housing Authority development partially in the district, and alludes to a mailer Mr. Akselrod sent out when running against Mr. Cymbrowitz in 2012–which mistakenly used the word “negrohood” rather than “neighborhood.” Mr. Akselrod has maintained that the mistake was a typo, and his campaign treasurer–whose mailing address was on the mailer–resigned over the incident.

“Two years ago, racist Assembly candidate Ben Akselrod called our home, Marlboro Houses A ‘NEGROHOOD’ And now he’s trolling around our community begging for votes? Not a chance! On Tuesday, September 9th, say NO to Racist Ben Akselrod. SAY NO TO RACIST BEN AKSELROD,” the front of the flier found in the Marlboro Houses reads, below a vampiric image of Mr. Akselrod’s face.

The back reiterates the message, and includes quotes from former Marlboro Houses tenants association president Florence Murrell and local pastor Rev. Frank Mason attacking Mr. Akselrod. It also features the tag “Paid for by Friends of Steven Cymbrowitz,” and the campaign openly took credit for the leaflet.

The front of the leaflet.

“Akselrod is a racist with no track record in the community. Voters have the right to know the truth about the people running to represent them. If Mr. Akselrod won’t be honest about his character and his past, we’ll do it for him,” said Cymbrowitz campaign spokesman Austin Finan.

This leaflet appeared less than a week after another controversial flyer appeared in the district, this one aimed at Russian-speaking Jewish owners. The first flier accused Mr. Akselrod–a Belarus-born Orthodox Jew–of supporting a Palestinian state and labeled him “a traitor to our community,” and showed a photo of Mr. Akselrod joining hands with Puerto Rican-American ex-mayoral candidate Erick Salgado as proof.

Mr. Akselrod claimed Mr. Cymbrowitz was responsible for the first flyer, which the incumbent’s campaign has denied. He also slammed his opponent for the new palm card that went out in the Marlboro houses, noting that he has been endorsed by the current teants association president Victoria Stancil.

The back of the flyer.

“Honestly, I am not surprised by my opponent’s tactics. It is a shame that a 14-year incumbent has no record to run on. This is why he is using baseless and tasteless attacks on me,” Mr. Akselrod said. “For voters it should be an indication of my opponent’s moral values and personality. To bring up a story of this type from two years ago, rather than focus on the issues facing our community today, provides a clear picture of my opponent’s character and popularity and what his priorities really are.”

Mr. Salgado responded to the first flyer on Sunday by crashing a Cymbrowitz campaign event with a group of his supporters, and chanting “Racist! Racist! Racist! Racist!” at the incumbent. Both Mr. Cymbrowitz and Mr. Akselrod held rallies for the Jewish state during its conflict last month with Hamas militants in the Gaza Strip, and Mr. Salgado–an evangelical Christian–is on record as a strong supporter of Israel.

Ms. Murrell and Mr. Mason could not be reached for comment.

Voters head to the polls in the southern Brooklyn district today. 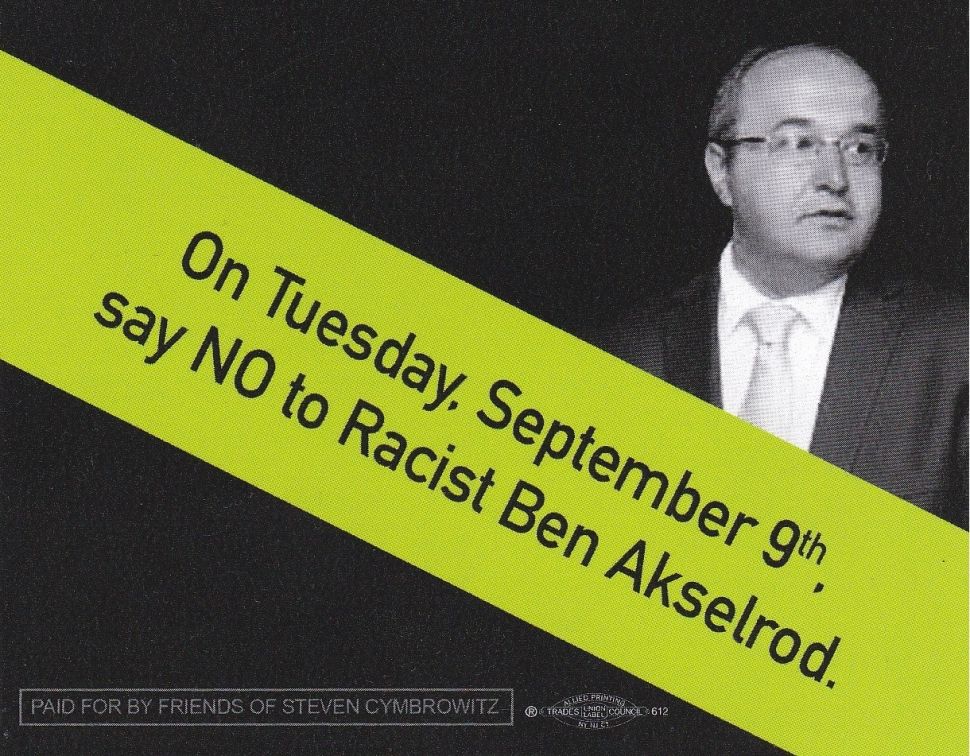