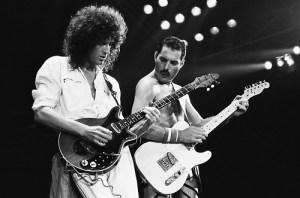 This is what Yayoi Kusama says upon receiving a journalist in her studio in Tokyo: “Hello! Thank you for coming to see me today! Please give me lots of good publicity for my exhibitions!” [The Telegraph]

An appreciation of Maria Lassnig, who died this past May at 94. [The Telegraph]

Collectors Robert and Karen Duncan are trying to turn Clarinda, Iowa into an art hub. [WSJ]

Portugal is $110 billion in debt, so a Lisbon court will let the very lovely but very broke country sell off 85 works by Miro. They were previously owned by the Banco Português de Negócios, which the government took over upon its collapse in 2008. [Le Monde via artnet]

Brian May, Queen’s guitar player, has lent his collection of stereoscopic pictures to the Tate Britain. [The Independent]

A new biography of David Hockney goes deep on his longtime feuds with the likes of Sir Norman Reid—”he’s just a pathetic little shit”—and Rudolph Nureyev—”Well, Rudi, it’s obvious that we are not going to be able to work together.” [The Guardian]

Department of Documenta predictions: “Once the sound system was ours, right before midnight, Documenta king-in-waiting Adam Szymczyk offered a four-song set—New Order, Joy Division, The Smiths, A Certain Ratio—that ignited all kinds of wild speculation across the dance floor. What does this mean for the next Documenta? was the question posed, with varying urgency, to me by not one, not two, but three artists—each trying, clairvoyantly, to read the back-to-back British postpunk as if curatorial tea leaves.” [Artforum]

Here’s a look into the Niki de Saint Phalle retrospective at the Grand Palais, the first major exhibition of her work in 20 years. [The Art Newspaper]