What is Hooli, exactly? In the words of Gavin Belson, “Hooli is about people. Hooli is about innovative technology that makes a difference. Transforming the world as we know it.” Thing is, Gavin Belson isn’t real, and until today, neither was Hooli.

A small team led by Techstars veterens has created an app called Hooli, named after the Google stand-in from HBO’s Silicon Valley. The new IRL Hooli, which launches today, is a collaborative chat app that allows you to manage teams and meetings — a familiar pitch to anyone who’s familiar with Stewart Butterfield’s meteorically popular Slack. It could even have a shot at success, if Slack wasn’t already the favorite unicorn app in the team management space.

Hooli’s marketing strategy is funny and obvious: name yourself after a fake company that people Google every day, and watch potential customers roll in looking for the fictitious namesake. It’s the same strategy used by Ricky Bobby’s Sports Saloon — named after Will Ferrell’s character in Talladega Nights — which was all fun and games until Columbia Pictures sued them and they had to change their name.

This kind of fiction tie-in would be fine if it were like Bubba Gump Shrimp, which is owned and operated by Viacom, the distributer for Forrest Gump. But as far as we know, the Hooli app team has nothing to do with HBO’s Silicon Valley.

In order for HBO to interfere with the new startup, they would need to prove that Hooli is trying to tie itself to HBO’s show, which shouldn’t be a tough case if their marketing materials keep making references to Silicon Valley plot points:

The developers behind Hooli have such good pedigrees that you would think they’d know better than to go biting off an HBO property. Perhaps the project is a hoax, or maybe they’ve already done enough back-channeling with HBO to make sure they’re on safe grounds.

The team is based in Brazil, but this seems like more of a defensive maneuver than a testament to the growing tech scene in Latin America. 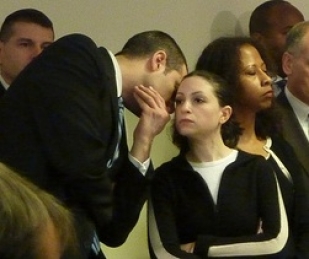