It’s pretty clear that my column on Friday – which noted that PR giant Burson-Marsteller had rejected Israel as a client in at least one instance and contrasted that with its acceptance of a contract from Tunisia’s Muslim Brotherhood – struck a nerve.

First, Burson-Marsteller issued a statement that was silent on whether the firm would represent Israel. Then their spokesman declined to answer a yes-or-no question regarding whether the firm would consider representing Israel. On Saturday afternoon, Burson’s lawyer reached out to the Observer to suggest that the person who made the anti-Israel comments in 2011 was “an unauthorized employee” who had spoken “without consultation with management.” After it further developed that the “unauthorized employee” was actually the CEO of the firm’s Norway office, a flurry of phone calls ensued, from Burson executives, including CEO Don Baer, to the Observer. Finally, late Sunday, the firm issued an updated statement, saying unequivocally for the first time that B-M would be willing to represent Israel.

I am gratified that Burson-Marsteller has issued its revised statement, which says, “Burson-Marsteller considers every client opportunity on its own merits and has no policy that specifically relates to Israel or any other country. In fact, we would represent Israel, as we would other countries.”

I stand by my opinion piece last Friday, which remains accurate. The op-ed created a tremendous uproar, which precipitated the company’s strong response. But the bottom line remains that in 2011, Burson-Marsteller’s CEO in Norway, Sigurd Grytten, declined to work with Israel and then just days ago agreed to represent Tunisia’s Muslim Brotherhood.

The PR powerhouse’s rebuttal, which appeared on the company’s home page after a few days of double-talk, is a clear response to public outcry and outrage. And to B-M’s credit, its revised statement makes clear that they would be willing to work for Israel.

While I take great exception to Burson-Marsteller white-washing the Ennahdha (Renaissance) Party, which is indeed the Tunisian Branch of Muslim Brotherhood, they have the right to represent whomever they choose.

The facts are clear there, as well. Only a few years ago the head of the Enhadda Party – Sheikh Rachid al-Ghannouchi, Burson’s client – who has been called by the Washington Post a “senior member of the international Muslim Brotherhood,” was denied entry to the United States. Indeed, the Muslim Brotherhood is an organization that is outlawed in many countries throughout the world.

As Friday’s Washington Free Beacon headline shouts, “Yale to Host Radical Terror Sheikh Who Advocated Killing of U.S. Soldiers” and notes that Mr. al-Ghannouchi, who has called for the murder of U.S. troops abroad, will be speaking at Yale University on Tuesday.

Mr. Al-Ghannouchi was a founding trustee and board member of a group that signed onto a notorious 2004 fatwa endorsing the killing of U.S. troops in Iraq and has personally urged the Muslim world to “burn and destroy” U.S. interests across the globe.

Burson can spin why their new client deemed America the “enemy of Islam,” and also said, “We must wage unceasing war against the Americans until they leave the land of Islam, or we will burn and destroy all their interests across the entire Islamic world.” One wonders how anyone can spin the quote from the head of Enhadda that “I give you the good news that the Arab region will get rid of the bacillus of Israel.”

Tellingly, Burson’s statement did not address factual claims about Ennahdha, including the Muslim Brotherhood’s long history of violence and hatred against the West, women, homosexuals and others.

Burson-Marsteller is a legendary crisis public relations firm for which I have great respect. Firms with controversial clients — Burson represents the Redskins in the fight over the team nickname and handled the Bhopal disaster in India and repped Blackwater after Iraq – frequently have to make decisions and choose sides. In signing Ennahdha, Burson has made its choice. 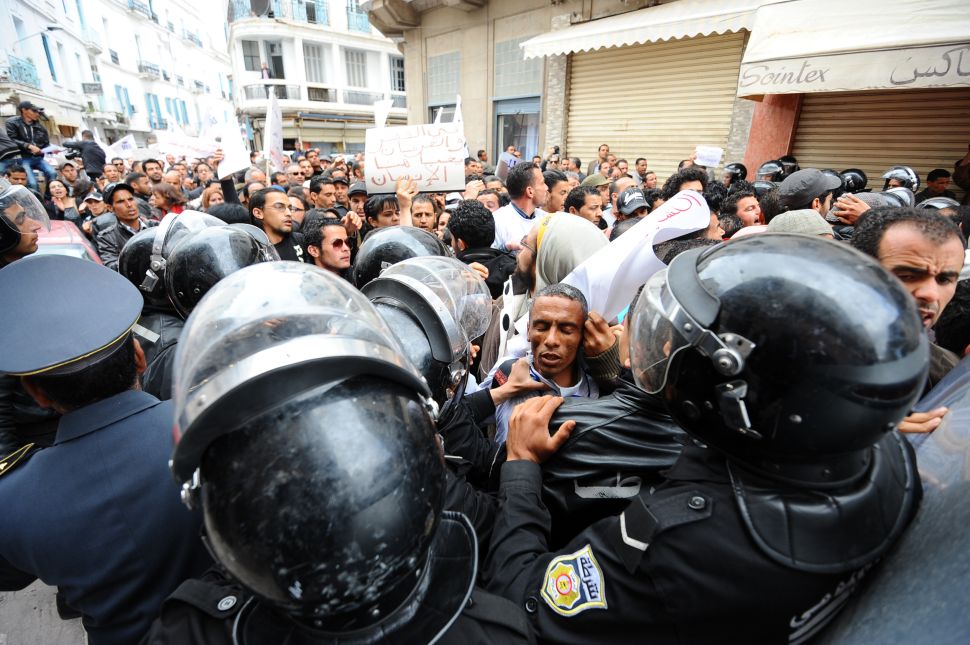