Photo: Getty Images. Damian Kulash of OK Go performs during the 2012 Firefly Music Festival at The Woodlands on July 20, 2012 in Dover, Delaware.

What do Prince, David Eggers, Becky Stark, The Pixies, David Foster Wallace, Shudder to Think, and the U.K. band, Jungle, all have in common? OK Go. According to the band’s lead singer, Damian Kulash, these are, to name just a few, some of the influences and inspirations the band was built on. Seen individually, a connection between these artists, musicians, and writers might seem far fetched, but taken as a whole, from the members of the band’s point of view, it makes perfect sense.

Earlier this month, I had the pleasure of speaking, via phone, with Mr. Kulash, a founding member and of the band, and we discussed their new album, Hungry Ghosts, due in October, and how he sees music, videos, and the live show all as proverbial pixels in an artistic “big picture.” He was gracious, patient, and unassuming. He was also well aware of how the reputation of the band’s videos can often overshadow all the other nuances of their music.

The band has genuine gratitude and awe for the hundreds of millions of You Tube hits collected spanning their videography. The immense popularity of the videos can also, at times, seem like a blessing and a curse. The beauty comes in the form of so many people being familiar with and enjoying the visually stunning and intricately choreographed videos. There is, however, a slight frustration that can sometimes arise when people want to dissect and rank the different aspects of the band separately and not appreciate them as a whole. There really isn’t a distinction, says Mr. Kulash. Dive in and let it lead you where it will. There are numerous facets, but each builds on and enhances the other.

I asked Mr. Kulash why people who love the band for their videos will buy their album or would want to come see them perform live. He was polite, but bristled a little at the idea again that the work created by the band needs to be separated. He suggested that maybe it could be assessed in this manner: a fan could peruse the Internet all day and marvel at the choreography, humor, color, and complexity of the OK Go videos. Enjoying those visual treats might create an earworm that leads to singing along in the shower or car. Repeat refrains and sheer bliss might lead to buying tickets to a live show. Mr. Kulash explained that it is the live show that is the culmination of it all. There is such a powerful, thrilling feeling to performing and seeing the audience being so involved in the spectacle.

Mr. Kulash didn’t want me to quote him, so I won’t, but he read or had heard somewhere about how when people are singing and sharing positivity, their heartbeats can become in sync with one another. He didn’t claim to know or fully understand the science behind it all, but he loved when he was a witness to it in concert. So many joyous emotions exuded by people in a large setting can lead to that positive energy entraining the emotional states of those around. At a show, the band playing and all those hearts beating together, this is precisely what makes OK Go feel complete and whole. OK Go’s music is for the ears, the videos for the eyes, and the shows for the heart. There is a visceral connection of, sound, sight, feeling, and art: the people using it all, the music, to become a sum greater than the parts.

“So turn up the radio and turn off the lights. I want it loud as hell, I want the walls to melt, ‘cause I got to lose myself tonight.”

OK Go is an American alternative electronic rock and modern power pop band, originally from Chicago now based in L.A. Formed in 1998, and featuring the same line up since 2005, they are releasing their fourth studio album, Hungry Ghosts on October 14. They are on tour now and play New York today and tomorrow.

The album is now available for pre-order on the direct-to-fan platform, PledgeMusic. Pre-order Hungry Ghosts now, and get a free download of Upside Out EP (featuring four songs from Hungry Ghosts) right now. 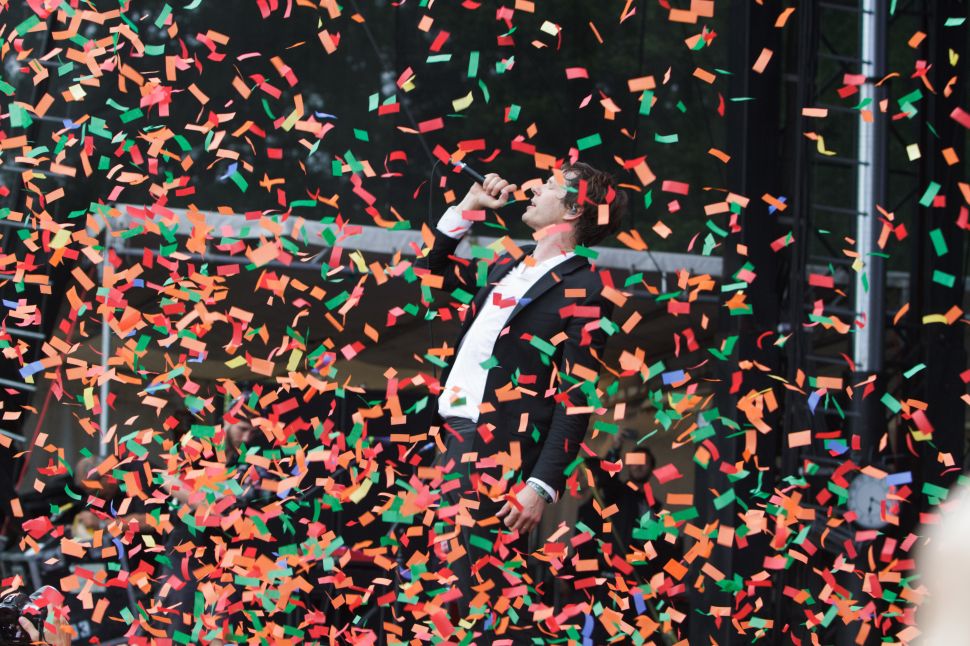