“Michael Grimm should be the last one to critique anyone or make a comment about anyone’s foreign policy issues,” Mr. Recchia, a Democrat, said last night on NY1.

After Mr. Recchia, a former councilman from Brooklyn, was unable to answer questions from reporters last week on international trade issues, Mr. Grimm — a Republican who served in the first Gulf War as a U.S. Marine — slammed him as unqualified to hold the seat and take votes on key issues like whether launch air strikes in Syria.

Mr. Recchia responded Friday by seeking to tout his own experience to the Observer — citing trips to Israel and Italy and a Japanese exchange program he helped run — but asked by Inside City Hall host Errol Louis to respond again last night, the challenger turned to attacking Mr. Grimm’s record.

“His foreign policy stance is going to Israel and embarrassing this country, going skinny-dipping in the Sea of Galilee, and taking trips paid for by millionaires who are under indictment, accepting money from national, foreign nationals, and that’s why he has an ethic investigation. And last but not least, when Obama, first he was supporting when Obama wanted to go into Syria with air strikes and then when he changed his position, he went against the president, and then he sends out a fundraising letter to fundraise off of it,” Mr. Recchia said.

That skinny-dipping accusation comes after Mr. Grimm took part in a trip to Israel that was probed by the FBI, which Politico reported yielded reports of nudity — but it was Kansas Congressman Kevin Yoder who took a swim in the buff, not Mr. Grimm. Mr. Recchia’s second jab refers to Mr. Grimm’s failure to report a paid trip to Cyprus — until a day after a host of the trip,Peter Papanicolaou, President of the Cyprus Federation of America, was arrested on federal corruption charges. The charges were later dropped.

The foreign nationals charge, meanwhile, comes amid reports that feds had been investigating Mr. Grimm for strong-arming Israeli nationals to donate to his campaign — a matter in which Mr. Grimm has never been formally charged, though he does now face a 20-count indictment for hiring illegal immigrants and other tax violations at a restaurant he ran before running for office. U.S. Attorney Loretta Lynch has said campaign finance investigations are still ongoing.

And on Syria, Mr. Recchia was referring to Mr. Grimm’s decision to first support military strikes in Syria last year, then rescind that support when the president supported it, and then send out a fundraising email touting his opposition to the president’s plan.

Though Mr. Grimm and Mr.Recchia have been sparring over foreign policy and trade qualifications via the press, they won’t have the chance toconfront each other in the same room tonight: Mr.Recchia has declined an invitation to a debate in Bay Ridge.

“We are not ducking debates at all. We informed them that we were not able, we had a scheduling conflict, and we were not able to do that. I am looking forward to debating Michael Grimm,” Mr. Recchia said, prompting Mr. Louis to note they’d be welcome to debate on NY1.

“I believe we’re talking to NY1,” Mr. Recchia continued. “I would love to come back with Michael Grimm and have a debate, Errol.”

For now, the two rivals are left to answer questions about their qualifications separately. When Mr. Louis pressed Mr. Recchia about his own foreign policy stances and how he would have voted last week in the decision to fund Syrian fighters, Mr. Recchia pointed to comments he made to the Observer saying he, like Mr. Grimm, would have voted in favor.

“I went on record last week and I said I would vote yes. I would support that, and we have to address this issue with ISIS right now, head on. They’re not going away,” Mr. Recchia told Mr. Louis.

Asked whether he feared that could lead to another long war far from home — not exactly a popular prospect with many voters, especially Democrats — Mr. Recchia stumbled a bit through an answer saying sending troops to Syria should be a last resort.

“The last thing we wanna do is put boots on the ground. We have many different, you know, that’s what we want, you know, we have options available to us. Let’s work with all the countries that we’re trying to put together, you know, unite together to address ISIS,” Mr. Recchia said. “ISIS is affecting everyone, and we are going to defend this coutnry and protect this country, and we are gonna do this no matter what it takes. And putting boots on the ground should be our last resort.”

Mr. Recchia also sought to play up his image as a family man who understands the concerns of working school parents (Mr. Grimm is a bachelor) and as someone who could help Staten Island and Brooklyn economically, saying he would pass a jobs bill and bring back funding for a light rail (long sought on Staten Island’s West Shore).

Despite Mr. Grimm’s difficulty fundraising since his indictment, the race between Mr. Grimm and Mr. Recchia remains close — a recent poll showed a statistical dead heat.

“Domenic Recchia can spin lies and sling all the mud he wants, but it still won’t change the fact that he is completely unqualified to be in Congress with his utter lack of knowledge on foreign affairs being at the top of the list,” spokesman Nick Iacono said. “If he has any questions about Congressman Grimm’s overwhelming experience — from combat in the Middle East, to being a special agent of the FBI for more than a decade or his well-respected opinions on U.S. foreign policy as a representative in the People’s House, regularly meeting with heads of state, ambassadors from around the globe and a vast consortium of military and intelligence experts — then Recchia should find the courage to debate the Congressman on foreign policy! We are sure the people want to hear about Recchia’s vacations to Italy and his exchange program for Japanese youths.”

This story has been updated with comments from the Grimm campaign. 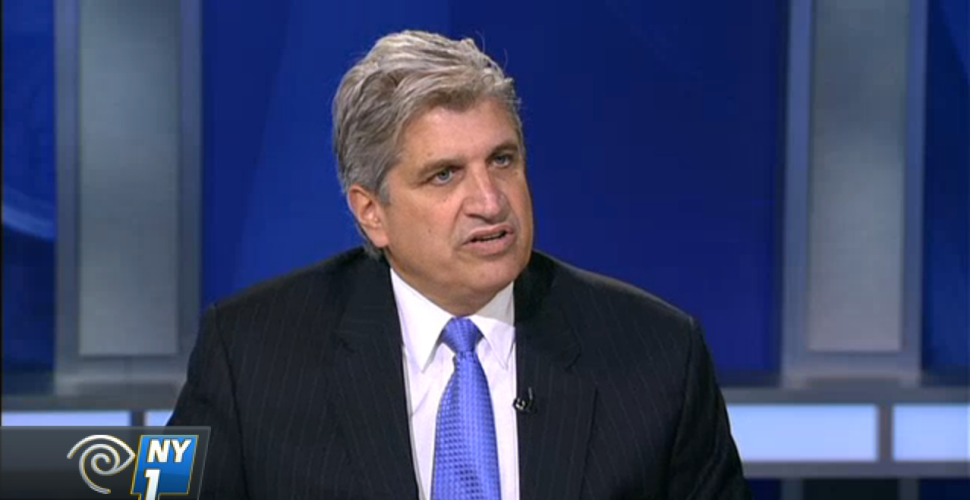