The deeply artificial spontaneity and double-jointed, proto-hipster nostalgia of the Pre-Raphaelites, which feel strangely alluring to me at the beginning of another frantic season, are most clearly visible in The Love Song. The 1868-1877 oil painting by Edward Burne-Jones constitutes the highlight of this small show in the back of the Metropolitan Museum of Art’s Lehman Wing.

Kneeling just right of center, in a satin gown with enormously puffy sleeves, is the song’s ostensible object, a young woman with a misty cloud of reddish brown hair, the fixed and wide-set eyes of a doe—the allusion here is as anatomical as it is figurative—and a gauzily tubercular tone. The dramatically shadowed folds of her gown leap out as sharp as sheet metal, but her sinking white flesh passes with barely a mark from breast to throat or throat to jaw. She’s kneeling on a stone pathway separated by a long, dewy greensward from the graceful stone city behind her, but her soft, well-articulated fingers play a sort of abbreviated or symbolically foreshortened pipe organ set down right on the path in front of her.

To her right, wearing Italian armor with shoulders like shellfish and billowing red silk elbows under his fluffy cap of brown hair and a fixed expression of impassioned, suffering lust on his jaundiced face, sits her knight. He gazes past girl and organ both toward the Cupid in red tunic kneeling on the instrument’s other side. With arms and legs exposed, complexion flushed, and wings like pinecones, the epicene godling shuts his eyes in concentrated pleasure as he works the organ’s bellows.

Every separate detail is undertaken with an ecstatic devotion that excludes its context; each leaf on the spare bush behind the girl’s train has a sharp-edged, sunlit glow. And the painting as a whole is almost crushingly well composed, a stately rectangle laid out like a college quadrangle with a row of quiet, bluish buildings across the top; knight, girl, and Cupid across the bottom and up the sides; and a few huddled sheep sprinkled onto the lawn that would otherwise be the painting’s largest patch of free space. Red, yellow, and pink flowers grow across the bottom edge, between stone path and viewer, as if in a window box, with two small blue blossoms, standing taller than the others, marking out the swain.

But the transitions among the picture’s parts are consistently elided, leaving the figures full of emptiness. This is what makes the colors sing out across the room, what gives the whole its thin but heavenly glow, but also what freights it with the morbid melancholy of unfulfilled desire.

An after-the-fact charcoal study of the painting by Burne-Jones, on display beside it at the Metropolitan, changes the young lovers’ relationship by slightly altering the composition. All three figures are still pressed front, each relating to what’s around them only as a means of performing for the viewer; but because the swain no longer looks past his damsel, they can appear to be in love not just generally, but with each other.

An even more striking example of the orchestration of disparate details into a singular effect is Angeli Laudantes, a large tapestry woven by Morris & Company’s artistic director, John Henry Dearle, from Burne-Jones’s design. Twin angelic youths in turquoise gowns, with lush, rosy wings, dewy halos like the seed balls of dying dandelions, golden harps that look grown rather than made, and arboreal flames flickering on their foreheads stand side-by-side against a millefleur background inside a border of oranges.

They are exact doubles—except for the different wildflowers growing up at their differently positioned feet; the different drape of their gowns; the different angle of their harps (the boy on the left holds his close and plucks it, while the boy on the right turns it in clearer profile and strums); the related but distinct faces, like brothers on opposite sides of adolescence; the younger angel’s red scarf, which twines around his neck and through his harp strings; and the fact that one gown is bluer and the other more green.

Along with other textiles, cabinetry, dishes, drawings and paintings by Dante Gabriel Rossetti, including Lady Lilith, a syrupy watercolor executed by Rossetti with his assistant Henry Treffry Dunn after an earlier oil, is Noah, a handsome tall charcoal that Burne-Jones drew as a design for stained glass. With beard like a rushing river, robe frozen in its particular fall, expression of Christian resignation contrasting with stretched-out pagan proportions, and model of the ark balanced in hand, he watches his dove return with an olive branch from its second post-diluvial trip.

“The Pre-Raphaelite Legacy: British Art and Design” is at the Metropolitan Museum of Art through October 26. 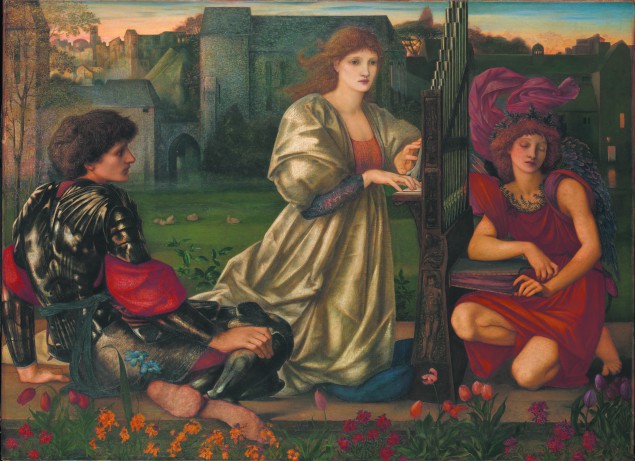 Filed Under: Arts, The Metropolitan Museum of Art, On View, British Art, Pre-Raphaelites