Late last week, The Washington Post published a touching remembrance by Texas-based Palestinian-American novelist-poet-songwriter Naomi Shihab Nye titled “On growing up in Ferguson and Palestine.” It details the shocking similarities between her two childhood homes:

Ms. Shihab Nye is a silky writer—as the author of beloved children’s books, winner of four Pushcart Prizes and a Chancellor of the Academy of American Poets, it’s no surprise that she wrings emotion from having single-handedly broken through Ferguson’s “invisible line”:

At 12, I took a berry-picking job on “Missouri’s oldest organic farm” in Ferguson. I wanted the job because I had noticed that the other berry-pickers were all black boys. I’d always been curious about the kids living right down the road whom we hardly ever got to see. We had contests to see who could pick the most in the searing humidity. I had obliterated Ferguson’s “line.” I felt a secret pride.

The Observer reached Ms. Nye by phone and interviewed her about the remarkable Ferguson-Palestine coincidence during this summer of trouble.

NYO: You grew up in Missouri but then returned to Palestine when your father’s mother was sick. You lived not in Gaza but in the West Bank, right?

Ms. Shihab Nye: We lived on the road between Jerusalem and Ramallah. Our relationship with Gaza is that we’d travel there—my father was a journalist—but we never lived there. Even years later, my husband and I would cross through Gaza.

It was always overcrowded and compressed and depressed and a sense of impoverishment. You always felt that people were making the best of a rough situation. Families where my family lived, in the West Bank, where they fled after losing their Jerusalem home, were in much better shape than those in the Gaza Strip. And things have gotten a lot worse there over the years, especially with the constant destruction and rebuilding. It never was a cheery, jolly place. And all these restrictions—inability to travel, could they import, could they fish, I remember a very big thing about whether the fruit could travel between Gaza and the West Bank and that being in Israel’s hands and “We don’t like your government so we’re not going to let you move.” The West Bank was more thriving and spacious. My grandmother inherited a home from an ancestor but that started to be encroached upon by settlements, with orchards seized, etc. so it wasn’t as if the West Bank was exempt from trouble.

Thank you so much for noticing that. I really did feel like I was hallucinating the whole summer with both Ferguson and Gaza in the news. I felt like if I didn’t say something, what kind of writer am I? If I don’t figure out some way to make a connection. Maybe the connection is slight, but I think the connection of domination and injustice is strong. My dad used to say Ferguson was a tinderbox waiting to explode. We asked him, “What is a tinderbox?”

Did you notice that while the piece itself refers to you having lived in Palestine, the URL of the story incorrectly refers to “on-growing-up-in-ferguson-and-gaza”?

I did notice that and I didn’t understand it. The URL says Gaza. I don’t know why. I always said “West Bank” and “Palestine”—Palestinians always called it “Palestine.”

Did your father remain a journalist until the end?

My father died seven years ago. He had a book, Does the Land Remember Me?, that came out three months before his death. Our young son had heard my father say that line and said “I think that’s the best title.” My father immediately grabbed it and said that should be the title.

“Let’s be the same wound if we must bleed.

Let’s fight side by side, even if the enemy

is ourselves: I am yours, you are mine.”

who suffered the most.

people getting over it.

Once when my father was a boy

a stone hit him on the head.

Hair would never grow there.

Our fingers found the tender spot

and its riddle: the boy who has fallen

stands up. A bucket of pears

in his mother’s doorway welcomes him home.

The pears are not crying.

Later his friend who threw the stone

says he was aiming at a bird.

And my father starts growing wings.

Each carries a tender spot:

something our lives forgot to give us.

A man builds a house and says,

A woman speaks to a tree in place

of her son. And olives come.

they end up with monuments.”

He’s painting a bird with wings

wide enough to cover two roofs at once.

Why are we so monumentally slow?

If you tilt your head just slightly

There’s a place in my brain

I touch its riddle: wind, and seeds.

Something pokes us as we sleep.

It’s late but everything comes next. 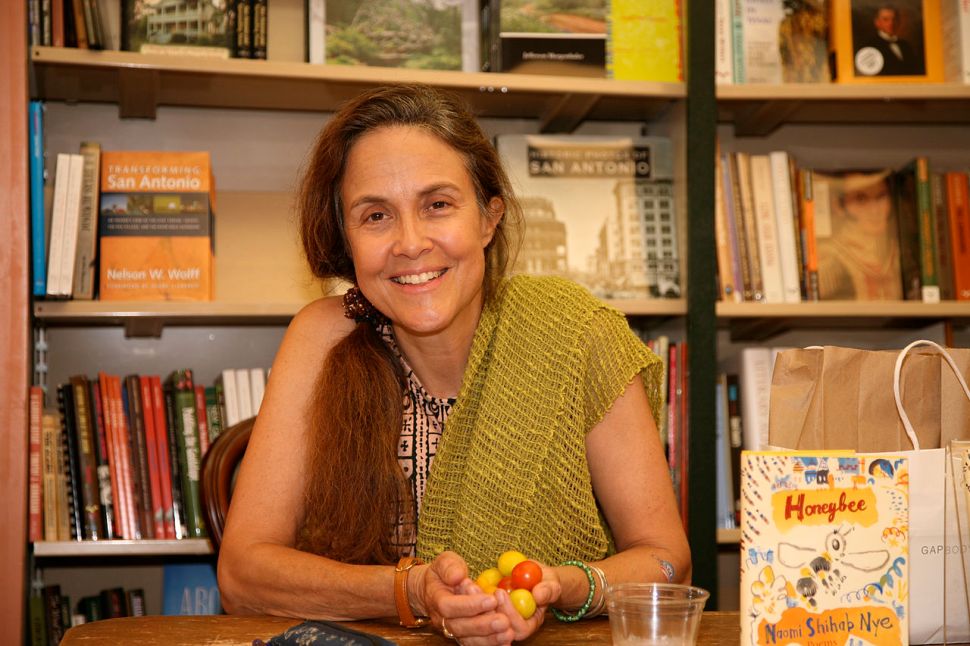