Elected officials and community groups rallied today to burst the expanding Airbnb bubble, arguing the popular site that allows tenants and landlords to lease their apartments like hotels is inflating rents and putting pressure on everyday residents.

The event outside City Hall–which featured almost a dozen politicians as well as influential groups like the Met Council on Housing and New York Communities for Change–was intended to counteract a massive advertising and lobbying campaign by Airbnb that the assembled politicians argued was aimed at weakening a 2010 bill outlawing the renting of entire apartments as temporary lodging.

The elected officials argued that the existing law does not prevent a tenant from subletting a room or a couch, but is intended to block landlords and absentee renters from making exorbitant profits by removing whole housing units from the market–and claimed that nearly two-thirds of Airbnb’s listings are in violation of the statute.

“Airbnb is an illegal hotel operation wrapped in a shiny bow of tech innovation and slick marketing,” said Manhattan Assemblywoman Linda Rosenthal. “Airbnb is destroying communities to build its own empire and increase its own profit.”

The electeds said their offices had received thousands of complaints from residents who reported loud, drunken and drug-fueled tourists partying in rented apartments in their building and of landlords trying to push them out of rent-stabilized units to make way for deep-pocketed short-term tenants.

“They’re being harassed out of their homes. They’re frightened of what’s happening in the apartments next to and above them,” said Manhattan State Senator Liz Krueger.

Brooklyn Assemblyman Walter Mosley went so far as to call for Airbnb’s obliteration as an enterprise.

“Airbnb must not only be confronted, must not only be punished, but must be put out of business,” Mr. Mosley declared, though he softened his stance somewhat when questioned afterward. “They have like any other company the right to make a profit and make a living, but not on the backs of working-class men and women.”

Airbnb, for its part, framed the demonstration as an effort by the hotel industry to kill competition. They disputed the politicians’ statistics claiming that the majority of listings are for entire apartments at jacked-up rates, pointing to their own figures indicating that 87 percent of renters are sharing the residence where they live, and that the hosts make, on average, a modest $7,530 a year.

The company also asserted that the roughly 25,000 units listed on their site is too small a number to have a significant impact on the housing market.

“Some in the hotel industry will do everything they can to stop the sharing economy, but we look forward to working with leaders in New York on sensible legislation that cracks down on illegal hotels and ensures regular New Yorkers can share the home in which they live,” Airbnb said in a statement. 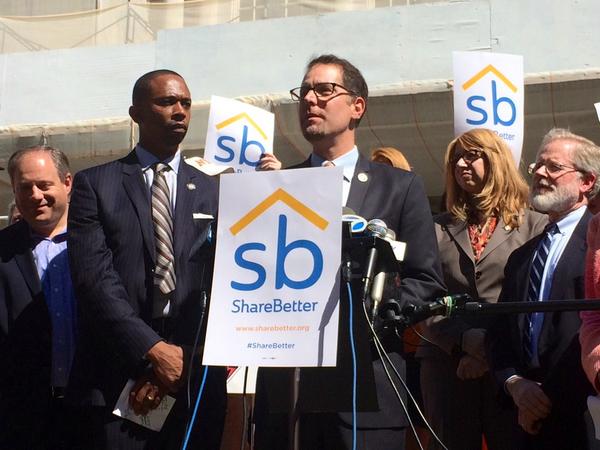