Despite its over 9 million likes on Facebook, not everyone loves Humans of New York (a lot of people actually really loathe it). The blog, which began in 2010, has inspired spin-off blogs–Humans of Paris, of Amsterdam, of Rio de Janeiro to name a few–a book and, recently, some haters. Now, Death and Taxes has just posted a parody video by comedian Tyler Fischer in which he masquerades as photographer Brandon Stanton, mocking the cult of HONY.

Mr. Stanton seems like a genuinely good guy. Unfortunately for him, he’s a genuinely good guy whose affinity for drama lends itself to humor. Right now, the man behind HONY is on a 50 day grand tour of the world and New York seems to be feeling the loss. Luckily, Mr. Fischer is here to take his place. Dressed in the typical uniform of Mr. Stanton–a t-shirt and baseball cap, DSLR camera in hand–he runs around the city taking blurry, close range shots of strangers’ nostrils and scalps. Mr. Fischer even shows his subjects the awful photos but nothing will deter them from telling him their heartwarming stories, even as he runs away during their monologue.

Mr. Stanton’s blog has become a platform for inspirational messages which many find beautiful. Mr. Fischer’s gullible victims were so enamored with the blog that they were flattered by his very unflattering photos. Everyone who reads the blog wants to be featured. But Gawker’s Daniel D’Addario argues that you really shouldn’t. Last month he called out HONY as clickbait and a misrepresentation of New Yorkers. The blog, which was intended as a catalogue of the city’s inhabitants, has become a series of “people not as people but as vectors of how young, white New Yorkers see them.” More lightheartedly (and easier to agree with) is Mr. D’Addario’s assertion that these “Humans of New York” are caricatures which reinforce the old tropes–not to mention that the site “is disappearing up Stanton’s own navel”.

In Mr. Fischer’s video, he asked his subjects to make up their stories if they weren’t interesting enough for his “blog”. No one questioned his ethics. As he asked well-groomed teens in the park to pose as homeless youths, they were almost willing to comply. It was HONY, after all. 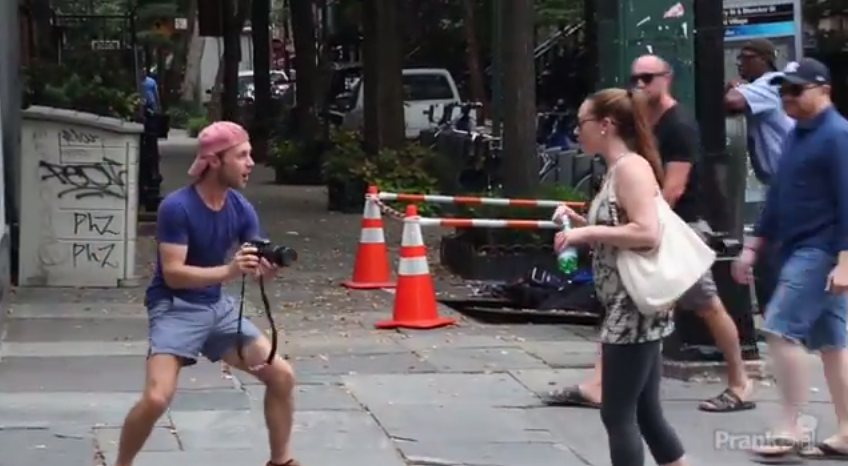