Forging an alliance between gay activists and striking miners was as hard to imagine in the U.K. during the turbulent 1980s as détente between the White House and ISIS is today. But so many people hated Prime Minister Margaret Thatcher that they bonded reluctantly in order to survive. Pride, a joyous, well-researched and liberating film in the feel-good spirit of Billy Elliot, The Full Monty and Calendar Girls and based on a true story, celebrates the attempts of a grass roots organization of gays and lesbians in London to raise money and lend support to striking mineworkers in Wales during the extreme hardships and strife when Mrs. Thatcher closed down the coal mines, costing 20,000 jobs and plunging the U.K. into economic chaos.

Following London’s first Gay Pride march in July 1972, a controversial event the clueless Mrs. Thatcher considered an outrage, members of the National Union of Miners found themselves being bullied just like the gays, suddenly sharing a history of prejudice, resistance and oppression they never expected. So a group of gays formed a fund-raising organization called the LGSM (Lesbians and Gay Men Support The Miners), contacted the Dulais Valley mining village in Wales, and despite the resistance of a hardcore nucleus of shocked right-wing conservatives who weren’t sure they wanted help from a gang of “flamboyant queers,” the village representative (played by the versatile and always reliable Paddy Considine) traveled to London to thank his new supporters. His fellow Welsh friends and neighbors were horrified, but they changed their minds when they saw the pile of money raised to support their families for the duration of the strike. The gays paid a reciprocal visit to South Wales, and that’s where the fun begins.

Talk about a toxic welcome! Fist fights, dangerous threats and ignorant rejections abound but eventually the rugged miners get a lesson in tolerance, friendship—and the latest Fire Island dance movements—they never dreamed of. The strike ended in 1985, a crushing defeat for Margaret Thatcher’s regime, and the movie ends at the 1985 Gay Pride parade when busloads of noisy, screaming blokes from the National Union of Mineworkers arrive in London to march united, arm in arm with their gay brothers and sisters for the first time in history. Now it’s the miners’ turn to support them! The result changed the British laws against sexual discrimination forever.

Veteran stage director Matthew Warchus, with scant camera experience, directs with authority and a wealth of details, from a rich and admirably fleshed out screenplay by Stephen Beresford that presents a fully propagated landscape of events that will make you cheer. Yes, it’s sometimes corny and a true tearjerker, not entirely without clichés—but a real crowd-pleaser. The dark specter of AIDS is not ignored, and there are a few coming-out stories that might raise an eyebrow. But it’s undeniably a feel-good film that is all heart, with a cornucopia of smashing performances from a cast of England’s best actors, including Bill Nighy, Imelda Staunton, Dominic West, and many others.

Sometimes movies simply justify themselves. This one might not be perfect, but who cares? In Pride, lives are changed, values are shared, and the best instincts of the human race are revealed, in one of the hippest examples of liberating enlightenment ever seen on film. 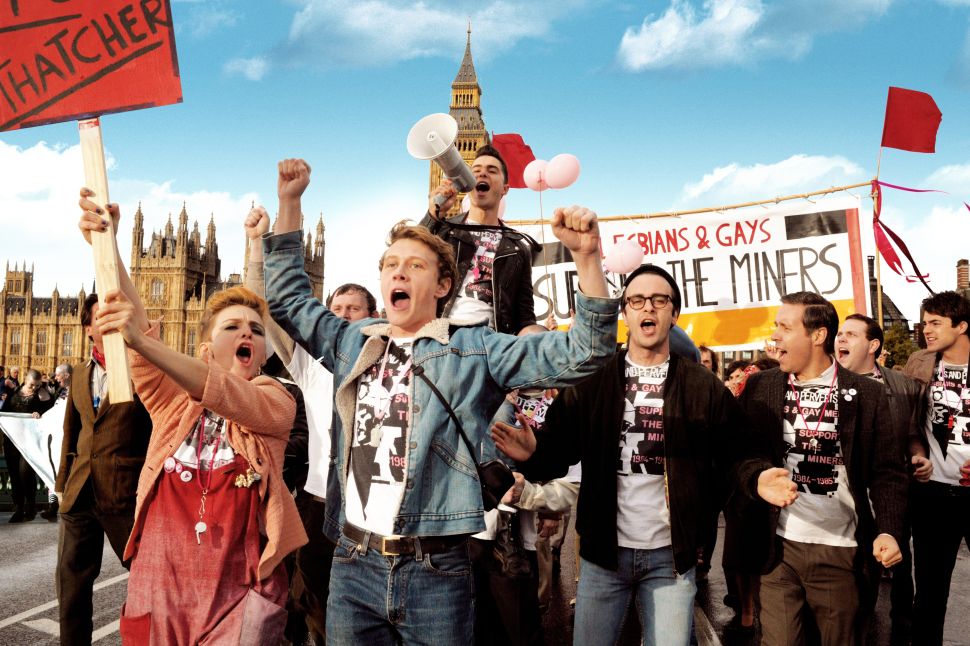