“These are the stakes.”

In 1964, that line referred to the nation’s potential nuclear demise at the hands of Cold War enemies in the most famous political ad of all time.

In 2014, Westchester County Executive Rob Astorino is applying the phrase — and the same little girl enveloped by a mushroom cloud imagery — to Gov. Andrew Cuomo’s involvement in disbanding the corruption-busting Moreland Commission.

Mr. Astorino’s campaign is airing a 30-second homage to the Daisy ad — titled “Jail — statewide today, 50 years after the “Peace Little Girl” advertisement urged voters to vote for president Lyndon Johnson over Republican challenger Barry Goldwater, warning the stakes were too high to stay at home.

The GOP gubernatorial hopeful’s ad seeks to make the same argument — although the stakes at hand are considerably different from 1964. Mr. Astorino’s ad even uses the same imagery of a young blonde girl, dressed the same as the girl in the original ad, picking daisy petals and counting them off before another voice counts down to a bomb dropping. The camera zooms to the girl’s eye, and a mushroom cloud appears, just like in the 1964 spot — with one huge difference: in Mr. Astorino’s version, the mushroom cloud morphs into Mr. Cuomo’s head.

“These are the stakes. Do we re-elect a governor who may end up in jail?” the narrator asks.

Copy appearing on the screen reads: “Andrew Cuomo. Under Federal investigation for Corruption, Witness Tampering, and Obstruction of Justice.”

The original ad, of course, featured a voiceover of President Johnson discussing the need for peace as the nation feared nuclear war — hence the mushroom cloud.

“These are the stakes: to make a world in which all of God’s children can live, are to go into the darkness. We must either love each other or we must die,” Mr. Johnson said over the advertisement.

In a press release, Mr. Astorino said every New Yorker needs to know about the investigations into Mr. Cuomo.

“No ad in American history captured the attention of the nation more than ‘Daisy,” and we believe this 50th anniversary version, ‘Jail,’ will similarly call attention to Andrew Cuomo’s corruption scandal here in New York,” Mr. Astorino said. “This governor swindled New Yorkers into believing he was a reformer, then arguably turned out to be the most corrupt state governor in modern times.  There is a giant cloud of corruption over New York, and its costing taxpayers dearly.”

Mr. Cuomo’s campaign shot back that the ad was factually inaccurate.

“The only way Astorino’s ad would be factual is if it were about him: Rob Astorino has been charged with making false statements by the US Attorney, is being forced to testify under oath before a judge for allegedly lying to federal officials and is being sued for racketeering,” campaign spokesman Matt Wing said.

Check out the original Daisy advertisement: 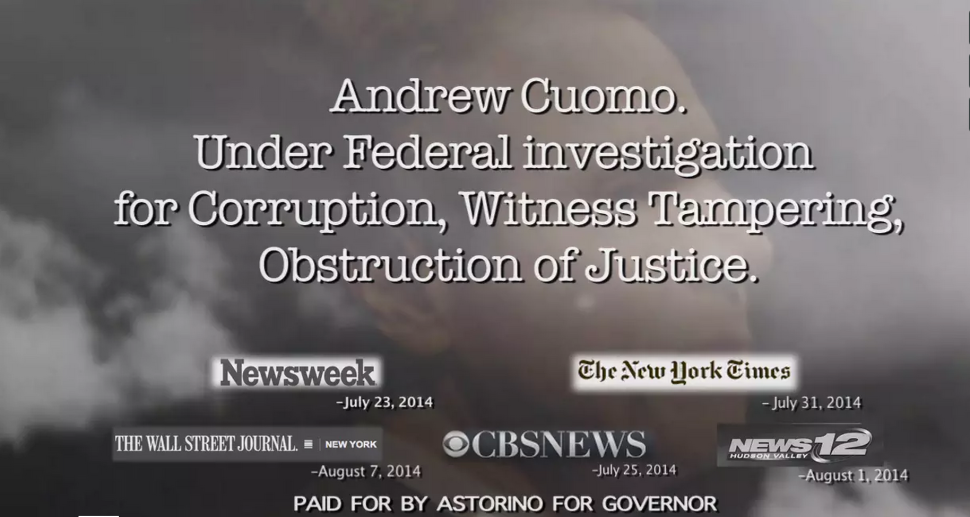