In a rare move, Attorney General Eric Schneiderman last night responded to attacks his Republican opponent John Cahill made about his office’s handling of Freedom of Information Act requests.

Mr. Cahill–former chief-of-staff to Gov. George Pataki–has repeatedly hit Mr. Schneiderman for not turning over to the press his office’s internal correspondence with consultant Jennifer Cunningham, a partner in the powerful firm SKD Knickerbocker who happens to also be the attorney general’s ex-wife. For the most part, however, Mr. Schneiderman has not engaged his rival.

But in an appearance on NY1’s Inside City Hall program, the incumbent defended his conduct and dismissed Mr. Cahill’s criticisms as the flailing efforts of a failing campaign. He repeated a much disputed claim that the correspondence with Ms. Cunningham is protected under an exemption in FOIL that protects “internal deliberations.”

“We’re being transparent, we’re complying with FOIL,”  said Mr. Schneiderman, claiming he had denied the press the documents on the advice of a long-serving attorney to the attorney general’s office. “It’s something that’s just complying with the law.”

He went on to dismiss Mr. Cahill’s criticism as just another in a long series of attempted swipes at his office, which have covered everything from Mr. Schneiderman’s involvement in the Moreland Commission to his litigation against tech start-ups like Airbnb and Uber.

“I don’t think that there’s anything out there,” Mr. Schneiderman said. “I know my opponent is sort of moving from issue to issue to try to find something, some point of entry, but I don’t think this one is working and some of his other complaints are falling, are also falling short. I’m running on my record, we’ve had a great three and a half years.”

“Last night Eric Schneiderman returned to the scene of his infamous hit and run to tell another whopper. It’s just pathetic that the state’s top law enforcement official has so much trouble telling the truth and complying with the law,” said spokesman Dave Catalfamo. 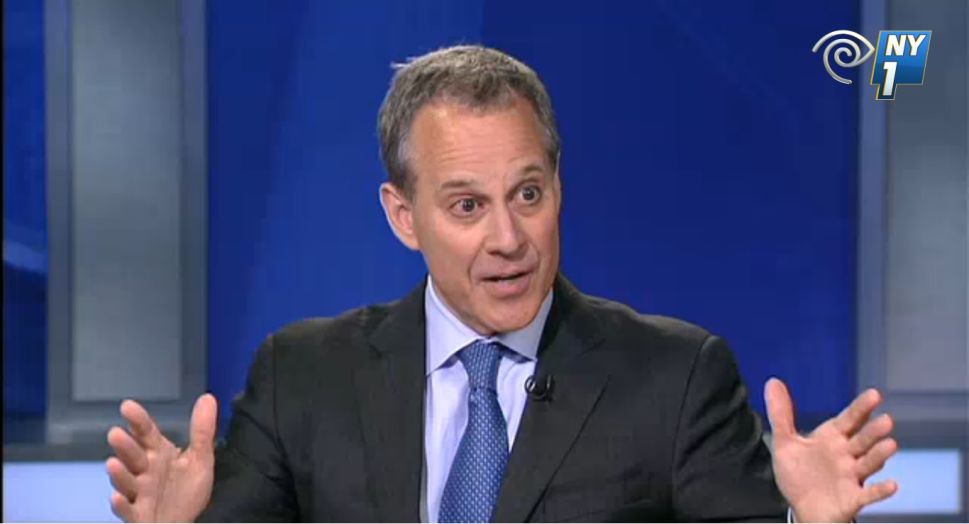