“Things are about to happen in the bedroom,” whispered the artist Paul Heyer, who was rocking a tattered clown suit, tangerine wig and flashing red nose. It was a hot tip given the nebulous nature of the event—a simultaneously playful and thought-provoking benefit-cum-artwork by Cara Benedetto that explored, over the course of Sunday evening, various aspects of sex. The event was the climax (sorry) of “Come Early and Often,” Ms. Benedetto’s installation at young Lower East Side gallery Chapter NY, and the artist’s students, collaborators, former teachers and friends turned out in force, performing throughout the cosy South Williamsburg apartment of Christopher Vroom, the investment banker and Artadia founder. There were surprises around every corner. Artist Corban Walker, who repped Ireland at the 2011 Venice Biennale, was tending bar.

“There’s supposed to be a go-go dancer in the bathroom, but I haven’t seen him yet,” said Ms. Russo.

We mentioned this dancer to Taylor Trabulus, the director of Martos Gallery in Chelsea. “I wouldn’t call it go-go,” she said. “It scared the shit out of me!”

Off to the bathroom. Ominously, the door was closed. We tentatively cracked it open, and found a tall young man wearing a black ski mask and little else grinding with a woman gyrating on top of the toilet. The lights were off and some satanic sounding beats were emanating from the shower. We closed the door.

“He doesn’t usually do it in an art context,” explained Ms. Benedetto, a tall, hyper-articulate blonde who was wearing a vintage black dress she found in Pittsburgh, where she recently began teaching at the Carnegie Mellon School of Art. According to the dancer, who eventually emerged unmasked and fully clothed to grab a drink, his kitchen is the usual venue.

Ms. Benedetto worked the room barefoot as art world supergroup The Cornichons, a band featuring artists John Miller, Jon Kessler, Ms. Rosenberg and Servane Mary as well as dealer Jose Martos began to cover the likes of Leonard Cohen and The Rolling Stones. The artist has thrown events involving multiple performances before, starting in 2010 at artist Kara Walker’s studio, though “Come Early and Often” was her first benefit-style venture. The funds she raised through the event will go to an organization in her home state of Wisconsin that provides transportation to abortion clinics. “I call it artist as direct-action philanthropy,” she said. She was also launching an app that will allow benefit patrons to track how their money is being spent by potentially real, potentially fictional artists.

The shifting pieces of Ms. Benedetto’s benefit resist easy categorization, but that’s kind of the point. Drifting between the interactions playing out in various corners of the apartment felt like turning the radio on and off: one kept landing on different songs, but it was all the same station. “People are smart,” said Ms. Benedetto, referring to the advantages of making fewer connections (or making connections less obvious) and allowing participants to weave together the fragments.

Not that this is always easy.

“Don’t you feel like you don’t understand Cara’s work?” asked Mr. Kessler, who taught Ms. Benedetto at Columbia University, as he packed up his guitar. “We had to grow so much to try and understand her work,” he said, going on to describe its frequently non-material nature and psychological sophistication.

As a student, he said, Ms. Benedetto was “much how she is now: eccentric and off the grid.” After all the toasts given that evening, he was ready with even higher praise. 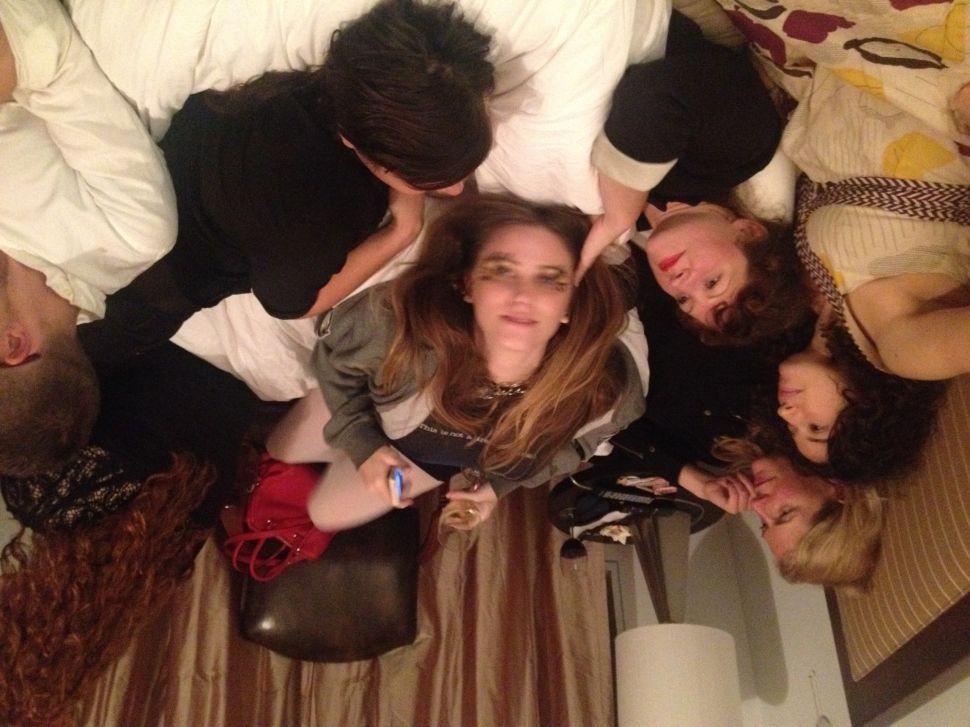