Last week, I had a drink with Ichabod Crane at The Headless Horsemen, right next door to Ichabod’s, after watching a screening of Sleepy Hollow’s second episode, “The Kindred.” That is so many coincidences I could just lose my head okay I’ll stop.

But stripped of his period costume and technological bafflement (but keeping the accent) Ichabod Crane is simply Tom Mison, a British actor who crossed the pond to star in Fox’s most unlikely hit. We had just watched last night’s episode in which, in true Sleepy Hollow fashion, a Frankenstein’s monster built by Benjamin Franklin rises from the dead to battle with two of the Horsemen of the Apocalypse. One of which is headless, naturally.

Mr. Mison smiles at the ridiculousness.

“I love that I just keep hearing these words —  ‘insane,’ ‘batshit crazy’ — but thrown about in a good way,” Mr. Mison told me over the bar commotion. “The more we get people saying ‘This is ridiculous, how do they keep getting away with this?’ in a positive sense, the happier I am. The moment there’s an episode where people can shrug their shoulders and go, ‘yeah, that was alright,’ then we’ve failed.”

“The Kindred” was definitely not the hypothetical meh episode that Mr. Mison is describing. Beyond the monster-on-horsemen fight scene, we have constantly-captured Katrina insisting on remaining captured. I ask if the cast ever hears complaints (shared by me) of, why you always have to make things difficult for yourself, Katrina?

“All the time. We hear that all the time. But there is a war to fight, and every character wants to come at it in a different direction,” he says. “And that’s always gonna cause arguments, which is where the drama lies. That’s where we’ll be able to keep it real, and keep it human. That’s why having an undead monster built by Benjamin Franklin will be okay, in the long run.”

Mr. Mison, who traded in Ichabod’s Revolution-era coat and boots for a lovely woolen sweater for this occasion, is actually more Crane in real life than he appears. This is thanks, in large part, to the meticulous effort he puts in to staying true to the character’s period dialogue.

“I have so many books and so many websites saved on my phone of etymology, and 18th century dictionaries. I’m such a pedant, and I know all the writers hate me for it,” Mr. Mison laughs. “I say, ‘I’m really sorry but this word, this word is from 1860. This is about 20 years too late.’ So I chip in with that every now and then.”

For anyone that’s seen the show (and if you haven’t, it’s awesomely absurd), those “shit jokes” are the cornerstone of the show. For all of the tough-guy posturing you see on TV these days (even by Sleepy Hollow’s lead-in, Gotham), the show remains a fresh of breath air thanks to its self-aware sense of humor. This, according to Mr. Mison, wasn’t the initial concept.

Mr. Mison tells me to expect more of this humor as season two progresses, but also far more conflict — not just between good and evil, but between Ichabod and Nicole Beharie’s Abbie as well.

“There is massive doubt. I think this season is about doubt for all of the characters,” Mr. Mison said. “The relationship with Abbie is really stretched, and that’s really put to the test. Which is good, it stops it from being a buddy cop show. There are moments where we really dislike each other.”

Offscreen, Mr. Mison and Ms. Beharie share a kinship, if for no other reason than they have to equally brave the storm of increasingly ridiculous dialogue thrown at them by the Sleepy Hollow writers. “Nicole and I do have an awful lot of difficult dialogue, a lot of dialogue that we look at and just think ‘ how do we do this?’ And as far as the show being ridiculous, the characters need to be completely straight,” Mr. Mison said.

It is in fact with a completely straight face, I can confidently report, that he then launched into a string of hypothetical ridiculousness. “So we’re talking about needing to find the mystical goblet of Ashkon, which conveniently was used by another founding father, and [Ichabod] remembers that, so now we need to go get it from the Cave of Despair or whatever, which, conveniently, is just down the road from Sleepy Hollow, that is stuff that needs to be completely straight.

“We can’t take the piss out of ridiculous situations,” he says, then finally laughs. “The show does that for us.” 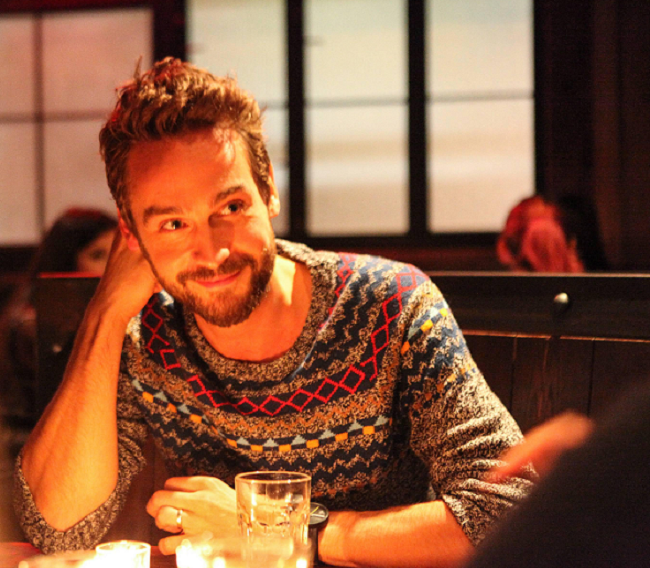