Sotheby’s has announced that it will be selling Jasper Johns’s Flag (1983) during the November 11 Contemporary Art Evening Auction in New York. This particular example of Flag, which is relatively small at approximately 11 x 17 inches and done in encaustic on silk and collaged onto canvas, carries a price estimate of  $15 million to $20 million. (or about $100,000 a square inch.) Before the sale, it will go on something of a grand tour, being showcased to collectors in Los Angeles, Hong Kong and London.

In 2010, Christie’s sold a larger version of a Johns flags, nearly 17 x 26 inches, which was also painted much early, circa1960-1966, for a record price of $28.6 million. It was the top lot of 79 offered in sale of the estate of author Michael Crichton. The estimate for that flag (also done in encaustic, but with printed paper collaged on canvas) was between $10 million and $15 million.

“The flag is arguably his most important image,” Lisa Dennison, Sotheby’s chairman of North and South America, told The Observer by phone from the Sotheby’s Los Angeles exhibition where the Johns is currently on display.  But unlike the one from the Crichton collection, she explained as she looked at the 1983 version, the encaustic process used  is more similar to the one he used making his classic, ground-breaking series in 1954.

Regarding the price point for Sotheby’s Flag, she mentioned that the Christie’s record reset the artist’s market. Moreover,  Johns was not the most prolific,” which is in part why the flag pieces are so significantly valued to begin with.

According to the Whitney Museum of American Art, which owns a magnificent 1958 Three Flags by Johns, the image — arguably — “flatters or honors the nation without genuflection.”

Sotheby’s Flag, which was originally acquired in 1983 from the artist and has remained in private hands for the last 30 years, was on loan to the Philadelphia Museum of Art from 2007 to 2014, and previously to the Rhode Island School of Design and Yale University Art Gallery. Charlotte Burns of The Art Newspaper initially reported its sale. 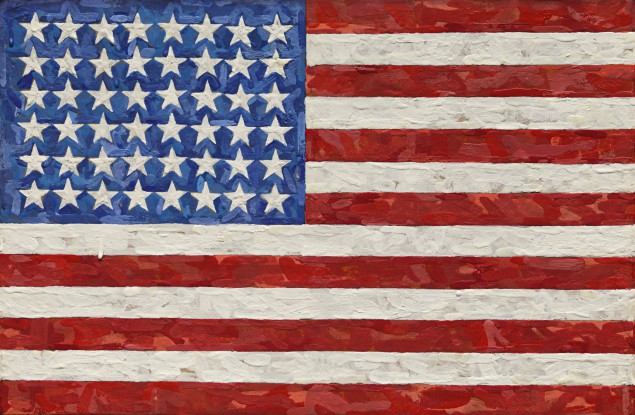