Despite slow fundraising for his reelection bid, Republican Congressman Michael Grimm has purchased airtime for a new television commercial slamming his Democratic challenger Domenic Recchia Jr. as a “tax-raising machine.”

The incumbent’s first ad comes after multiple pro-Recchia spots have begun to hit the airwaves, with Mr. Recchia’s campaign launching two ads and the Democratic Congressional Campaign Committee launching two more in the tight race for the Staten Island and Brooklyn congressional distirct.

In the 30-second spot, which begins with Mr. Grimm endorsing the message, the congressman targets Mr. Recchia, a former Brooklyn councilman, for his votes to increase property taxes in 2002 and to increase city income taxes in 2003.

“Domenic Recchia thinks we’re fools. Recchia claims to protect the middle class, but he’s just a tax-raising machine. Raising income taxes. Raising your property taxes over 18 percent,” a narrator says, over footage of Recchia and a picture of a scowling couple.

The ad also makes direct reference to Mr. Recchia’s first ad, “Saturday” — even using footage from the spot — showing the former councilman driving back and forth between the Brooklyn section of the district where he lives and the Staten Island section where his mother lives, and saying he’d like to cut the hefty toll on the Verrazano-Narrows Bridge connecting the boroughs.

“Now Recchia says he wants to lower tolls. But for 12 years as a Brooklyn councilman, he did nothing except vote for even more tolls. More taxes, more tolls: that’s the real Recchia. Don’t be fooled,” the ad concludes.

The City Council does not control the tolls on the bridge, which are set by the Metropolitan Transportation Authority, a state agency. But the advertisement cites Mr. Recchia’s vote in support of a resolution calling on the state legislature to consider Mayor Michael Bloomberg’s proposed congestion pricing plan, which would tolled access to Manhattan to encourage the use of public transit.

Mr. Grimm’s campaign offered no information on the cost of the ad buy, or about how long it would be airing. But it’s already caught the eye of at least one voter in the district: former Democratic Councilman Sal Albanese, a fan of neither Mr. Grimm nor Mr. Recchia, griped on Twitter about seeing the ad on the airwaves during the New York Yankees game Sunday night.

Mr. Grimm’s spokesman, Nick Iacono, added in a statement: “It’s no wonder that Recchia refuses to talk about his toxic record and is only interested in bashing Congressman Grimm, who delivered real, tangible results for the people of this district including $60 billion in Superstorm Sandy aid, millions of dollars in grants for our hospitals, and landmark flood insurance reform, just to name a few.”

It seems unlikely that Mr. Grimm will be able to run quite as many television ads as Mr. Recchia, who will benefit the DCCC’s cash and what it is touting as an “unprecedented” field operation to unseat the incumbent.

Mr. Grimm has received little support from national Republicans and has faced difficulty raising campaign cash since he was indicted in April on 20 counts of wire and mail fraud and tax charges relating to the operation of his former health food restaurant, Healthalicious. In the most recent filing period available, Mr. Recchia raised more than 11 times the amount Mr. Grimm had raised.

But thanks to pre-indictment fundraising, the candidates’ war chests were close in size at the last reporting date, on July 15: Mr. Recchia had $1.3 million on hand, and Mr. Grimm had just under $1.1 million — but he also had more than $438,000 in debt, mostly legal fees, while Mr. Recchia was debt-free.

The candidates will not have to file their next campaign disclosures with the FEC — which include money raised and how much was spent on things like ad buys — until October 15.

In a statement to the Observer, Mr. Recchia accused Mr. Grimm of trying to district voters from his legal woes.

“Once again, Michael Grimm is trying to distract voters from his 20 count federal indictment, including charges of wage theft and withholding more than $1 million in earnings. Considering he has also been indicted for lying under oath, it’s clear he has no problem issuing lies and distortions in this campaign. The people of this district deserve better,” he said.

Check out the ad below: 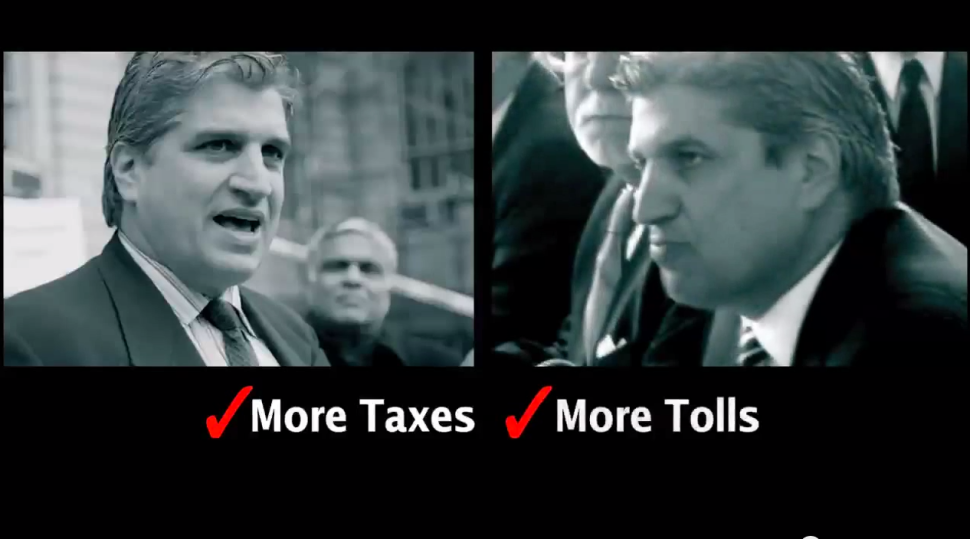