“Vanity of vanities, all is vanity!” is the first phrase spoken in the Book of Ecclesiastes, one of the 24 books of the Hebrew Bible. It is only with a small bit of irony, or so he claims, that Terry Gilliam chose those words as the opening phrase of his as-yet-unfinished memoir.

I was speaking by phone to Mr. Gilliam, who was in rainy London. Over the course of an hour-long conversation I found that vanity, despite what he says, is not what drives the 73-year-old director of Time Bandits, Brazil and 12 Monkeys. Mr. Gilliam speaks of such films with reverence, making it clear they serve to validate his life, not his ego.

“I like making things,” Mr. Gilliam told me. “That’s the way I measure my existence: What have I made? What artifacts have I left to confuse, confound and delight the world?”

It’s not an existence that appears to need much validation. An original member of Monty Python’s Flying Circus, Mr. Gilliam is responsible for some of the most influential films of the last thirty years. He broke into directing with Monty Python and the Holy Grail after years of writing and animating. Ten years later, his screenplay for Brazil was nominated for an Academy Award. The following decade, 12 Monkeys introduced the world to a still relatively unknown Brad Pitt.

His work is celebrated for its head-spinning complexity, but in real life Mr. Gilliam is a relatively simple man. He recently binge-watched Breaking Bad on Netflix, calling it the “best thing I’ve seen in years.” He reads “usually two books at a time, sometimes three.” In between such everyday activities, he finds himself “looking at trees or, you know, watching the clouds.” When I asked him what he worries about, he said, “The fact that I’ll never work again. I get caught up in that one quite easily.” I couldn’t tell how much he was joking.

He rarely goes to the movies, finding most unoriginal or boring, especially those involving superheroes.

“Marvel has taken over the world,” Mr. Gilliam said. “And because they make such expensive movies, they suck all the money out of the system. Either you make your $100-million-plus film, or your much-less-than-$10-million film.”

Lately, Mr. Gilliam has looked to the past for inspiration. Graduating from Netflix, he discovered Amazon Prime and its large selection of silent films.

“I actually got quite excited about some of those, compared to what is available now in theaters,” Mr. Gilliam said. “They seem to be dealing with bigger, more interesting subjects.”

Which brings us to Zero Theorem, Mr. Gilliam’s latest film. Like so many of his movies, it takes place in the future, centering on computer hacker Qohen Leth (played by Quentin Tarantino standby Christoph Waltz). The story calls for grand visuals and special effects; however, the director was granted a budget of only $8.5 million. (For comparison, Guardians of the Galaxy, Marvel’s latest offering, cost $170 million.)

To compensate, Mr. Gilliam shot his futuristic London in Bucharest, the “cheapest place we could work that had a good crew.” Costume designer Carlo Poggioli purchased his materials at a Chinese market outside the city, buying fabric not by length but the kilo.

“They were horrible man-made fabrics, but they had extraordinary designs on them,” Mr. Gilliam recalled. “Poor Matt Damon [who plays the role of Management in the film], his clothes were made out of these fabrics and they didn’t exactly breathe. It was a painful, sweaty process.”

The film wrestles with many themes at once, all brought to life by Gilliam’s trademark visuals. Bucharest it is not. What it is instead is a not-so-distant-future London, where technology is the new human interaction, wall-to-wall video advertisements tell you what you need, psychiatry has been reduced to a computer program and parties are attended with headphones in ear (something, as a recent college attendee, I can affirm is already happening).

“It’s all about connection…you can’t get anything if you’re not connected,” said Zero Theorem’s Joby, played by David Thewlis. It’s a phrase that wouldn’t be out of place today in New York, where crashing into an iPhone-engaged pedestrian is commonplace.

“Even when it is supposed to be connecting us more than ever, I think it’s actually disconnecting us,” Mr. Gilliam said of today’s technology. “We are able to live in our own secret world via technology, instead of face to face.” (The fact that our conversation took place on different continents went unremarked upon.)

Mr. Gilliam is not a full-blown technophobe. He told me he “loves his iPhone” and “lives on his laptop.” But he does see warning signs.

“It’s when [technology] takes over your life, at the expense of living life. That’s what it’s about,” Mr. Gilliam said. “When I see people in the middle of a rock concert, in the middle of the first song, before it’s even finished, they’re Tweeting, they’re commenting, rather than living in the moment and experiencing quality. That’s what makes me crazy.”

Does he see the disconnect creeping into the experience of watching movies?

“You went to the cinema before, and it had a sense of respect and worship,” he said. “You went in to the ‘temple,’ and there was this great overpowering image that was bigger than you. You were a small part of the crowd. Now, with your iPhone, you dominate it. You are a giant, peering into this small world. And that gives you power, but it also distances you.”

Which is where the message of Zero Theorem gets murky. Yes, the director believes in watching movies in the theater, and yes, he is hesitant to support “hand-held” movie viewing. However, Zero Theorem will be released in America on video on demand and available to the public on iPhones a full month before it hits theaters.

“One gets caught within one’s own jokes sometimes,” the director chuckled.

Technology is not all that conflicts Mr. Gilliam. In the movie, Qohen Leth waits for a phone call from a higher power inside the ruins of a burnt-out church. Yet Mr. Gilliam gave up on ever receiving that particular call a long time ago.

“I think that for a lot of people, religion is dead — it just happens to be half of America doesn’t believe that,” Mr. Gilliam said. “But the kind of relaxed religion that used to exist, where it was part of a community, it was what you did on Sunday, the fact that everybody used to read the Bible, and you could comment on it at any point — if you said David and Bathsheba, people knew exactly what you were talking about – that’s pretty much dead.”

For this he blames technology. “A lot of that old faith is no longer there to support you,” he said. “Where do you go? What do you believe in? That’s why I think a lot of people believe technology and information is our answer.”

Mr. Gilliam’s relationship with religion has always been complicated. He attended Occidental College on a Presbyterian scholarship and has read the entire Bible “at least twice,” he said. He almost become a missionary, then gave up on the church altogether.

“I walked away from it all because the people of the church couldn’t take my jokes,” he said. “They would say, ‘That’s disrespectful.’ I would say, ‘Well, what kind of God do you worship that he can’t take a joke?’”

In something of another little joke Mr. Gilliam ended up caught within, recently he found out the origin of the name Qohen Leth, which screenwriter Pat Rushin culled from the Hebrew word Coheleth, the name for one of the 24 books of the Hebrew bible. In English, it is the Book of Ecclesiastes.

“How did all this happen without me knowing it?” the director said. “Where did all these connections come from? That is what intrigues me.”

Maybe Mr. Gilliam can hear that phone ringing after all. 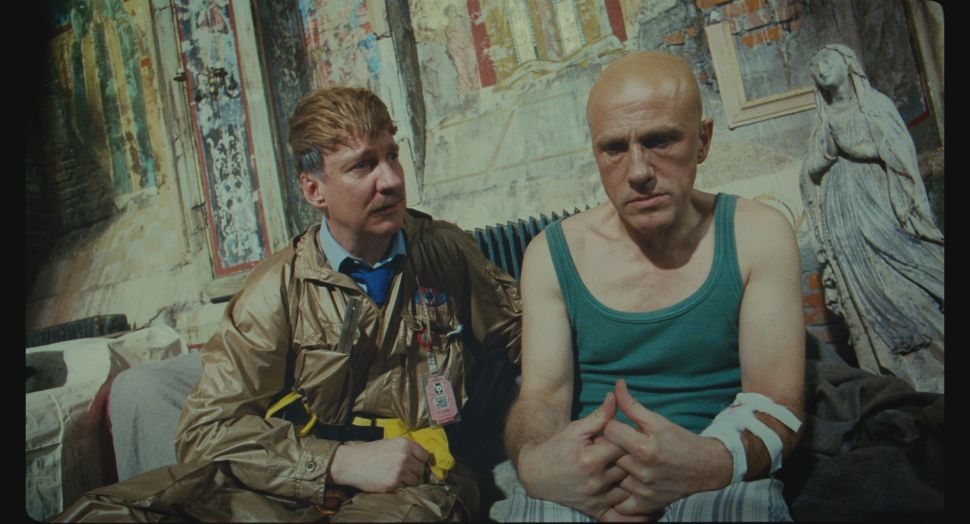