Still grieving over the death of their son in Afghanistan, the Peterson family doorbell rings on a sunny October day in New Mexico and the handsome young man at the door says, “My name is David. I knew your son Caleb. We trained together, we served together, and we became good friends … I was with him when he died.” Thus begins The Guest, an ’80s style action thriller that turns out to be more suspenseful and keenly plotted than most, with a compelling centerpiece performance by Dan Stevens (Downton Abbey) that deserves attention.

The army buddy who returns home and looks up a fellow soldier’s relatives under false pretenses is a familiar plot line that goes back as far as the early days of live television dramas starring young actors Paul Newman and Cliff Robertson. In no time, this one moves into his friend’s old room, wins over his parents, instructs his sensitive younger brother in how to defend himself against school bullies, and accompanies the troubled teenage daughter to a dance. Everyone falls for David except the dead Caleb’s skeptical sister—until she gets a look at him coming out of the shower clad only in a towel. But the throbbing synthesizer music on the sound track is so portentous and creepy that it tips us off, too, to the unsettling fact that things are about to get nasty, and the guest in the house may not be who he says he is.

As the plot thickens, the suspense intensifies. One by one, everyone the Petersons know starts dying a violent death. The real identity of the mysterious David drives a fascinating story. He’s so sinister and charming that he keeps you interested. Even when the military police show up and shoot up the Peterson house in an explosion of machine gun fire, he never loses his Pepsodent smile. As bullets shatter the windows and Mom hides behind her kitchen stove, he says, sweetly, “I’m sorry, Mrs. Peterson, but I’m afraid I haven’t been fully honest with you.”

The horror that lurks behind this nightmare is a secret I wouldn’t dare divulge; working it out for yourself is half the fun. The Guest is the latest thriller from writer Simon Barrett and director Adam Wingard, the team of terror specialists who are the new kids on the block in the overworked genre of psycho killers. (Their previous effort, You’re Next, developed a cult following.) This one is headed for the same success. It has sharp dialogue, visual flair, a sense of tongue-in-cheek humor, and displays a strong fondness for John Carpenter movies that borders on parody. Fans of the Halloween franchise beware: you’ll recognize some of the same music cues and camera shots, culminating in a bloodbath through a daunting maze at a Halloween ball. The ultimate scene is a disappointing cliché borrowed from countless B movies, including every parting shot of Jason in the fright mask that promises audiences more Halloween sequels on the way.

Never mind. Mr. Wingard knows how to frame a scene for maximum goose bumps, the icy-cool demeanor of the inventive central lunatic compellingly masks the carnage yet to come, and there isn’t a moment in the screenplay that lags. Mr. Stevens was a British wimp before they killed him off on the Downton Abbey series, and he was so benign opposite Jessica Chastain in the boring Broadway stage revival of The Heiress I could hardly stand him. He’s been living at the gym ever since, and diving through glass windows with a submachine gun while showing off his new tanned, toned physique, he’s undeniably launching a new career with a flawless American accent. The rampaging finale of The Guest lacks coherence and originality, but so much controlled energy surrounds it that every lust is sated. 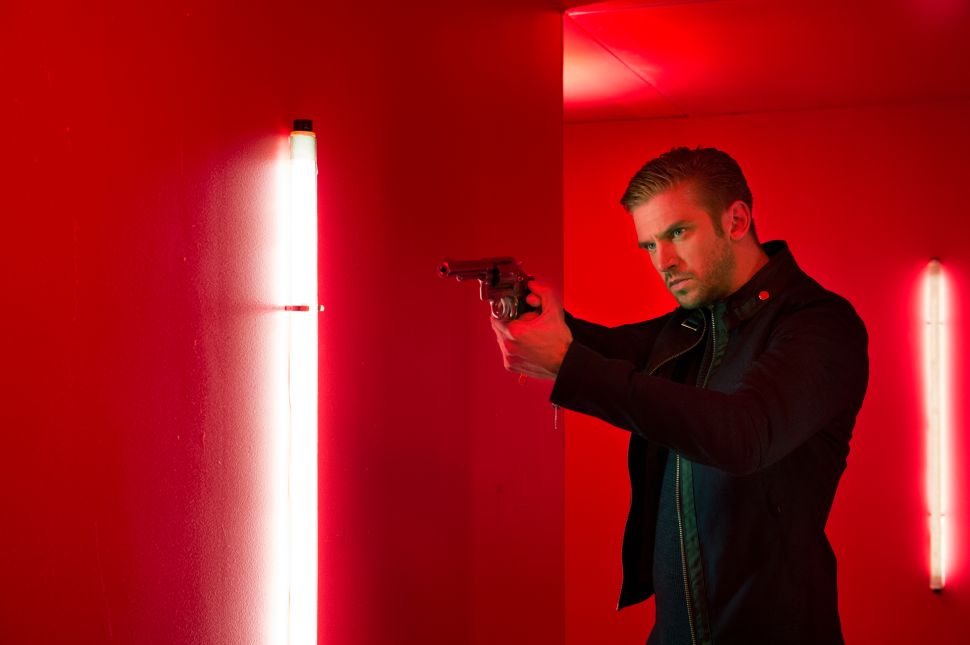