First, the good stuff! For all the general brainless-ness masquerading as intellect in today’s sitcoms (bazinga!), ABC’s Black-ish really feels like it actually has something going for it in the brain department, and a genuine wish to touch on important cultural points. And it is, at times, really funny, which is a good thing for a comedy to be when so many comedies these days only think they are…(bazinga!)

Where the pilot errs and disturbed me a little bit is in its portrayal of Andre Johnson, played with perfect energy by Anthony Anderson, a father who in trying to give his family a better life is afraid they will lose their sense of black culture. Where I’m confused is whether this show wants us to think Andre is right or wrong. Because his attempts at trying to change his family oftentimes border on delusional, and some of his positions are a little too on the nose.

Is he right in wanting his family — who live in more comfort than most people, no matter the race — to be “more black?”

There are two scenes in particular that I want to focus on. The first takes place in the marketing company where Andre works, where his many white co-workers and all incredibly ignorant (“how would a black guy say good morning?”), which isn’t okay except in the case of his assistant Billy, an ‘honorary brother.” This is all set up to make Andre an outcast despite his success. But during a meeting, he notes the difference in snacks between lower management and the exclusively white upper management. But Andre is waiting for a promotion, and envisions himself on the other side of the table.

Andre obviously wants to integrate with upper management, which makes sense — who doesn’t want to move up in the world? But why isn’t his family allowed to act that way, too? Wouldn’t that behavior make Andre just as “black-ish” as the rest of them? There’s no conflict for leaving the predominantly black side of the table behind, besides “when one of us makes it, it feels like we all made it.” But, really, only he has and the black janitor smiling at him isn’t going to change that.

The second scene I want to highlight sees the Johnson family sitting around the dinner table eating “boiled fried chicken,” discussing Andre’s promotion. First off, I have to mention that Laurence Fishburne as Andre’s dad Pops in this scene, and all scenes, is just the best. He’s basically the Greek chorus for old-school parenting, and his fedora game is on point throughout.

Moving on, the talk at the dinner table turns to Barack Obama. Andre’s two youngest children weren’t aware that Obama was the first black president, because he is the only president they have known in their shorty lives. This moment both makes you think holy shit that’s probably a thing that happens in real life AND infuriates Andre to no end.

BUT, later on that night, while discussing his worries with his wife, Andre dismisses his wife’s notions because she isn’t “technically black” (she’s biracial.) Does that mean Andre also thinks Obama, who they were just discussing, isn’t even “technically” the first black president? Again, is the problem that Andre’s family is losing their cultural identity or that Andre is losing his mind? (Actually that would be kind of darkly cool.)

Maybe, just maybe, I’m taking a sitcom on ABC way too seriously. But I don’t think so, mostly because of the end of the episode. Andre’s campaign to reconnect his family to their roots comes to a head when his son asks for a Bar Mitzvah, and Andre instead opts to give him an African rites of passage ceremony instead (Pops: “We’re black, not African. Africans don’t even like us.”) This finally, finally makes him see that maybe he’s focusing too much on too many racial subjects (especially for a pilot.) And this gives me hope that now that they have that pilot-itis out of their system, black-ish can become the smart, funny show underneath this episode’s surface. 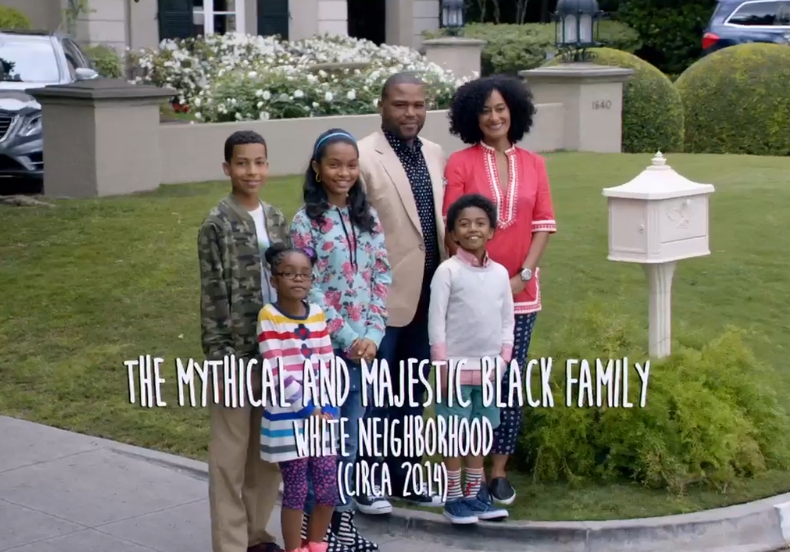