Since Columbia University canceled the new fall parallel to its spring Bacchanal concert on August 11, Facebook and Twitter feeds have been ablaze with angry posts and #CUfail hashtags. Students are capitalizing on the administration’s wishy-washy reasoning for the sudden reversal—citing anything from preventing sexual assault to helping students concentrate on coursework to never actually giving official consent to the event in the first place—by focusing on the minutiae of the situation instead of the bigger picture. Meanwhile, in true Columbia fashion, the student-run Bacchanal committee is criticizing the powers that be for their lack of consideration of what the undergraduate community wants, or, in other words, what we need to feel a false sense of togetherness on campus.

Well, I’m not here to speak for my peers–I know that quite a few of them are disappointed that the concert will never come to fruition. But from where I’m standing, the administration made the right decision regardless of whichever superficial pretext Columbia’s spokespeople chose to spew to the media.

There’s a reason why Bacchanal is named after Bacchus, the Roman god of intoxication. Each April, it gives stressed out young adults the opportunity to drink, smoke, or snort their worries away while listening to subpar music on the steps of Low Library. For the sake of disclosure, I’ll admit that I’ve never actually been to Bacchanal. I was a first year last spring, and I opted for free tickets to “Of Mice and Men” over standing in a sweaty pile of people while listening to Lupe Fiasco give lectures on academia between songs. However, I was around the whole shebang as it happened—it was nearly impossible not to be.

Whether you’re having lunch surrounded by hot, stinky groupies at Ferris Cafeteria, chatting with security guards about the number of ambulance trips in one afternoon, or venturing into bathrooms covered in a toxic combination of paint and throw up Bacchanal consumes Columbia whether you choose to participate or not. Last year, Holi was on the same day, and to accommodate both festivals, many of my friends awoke early so that they could start day-drinking at 10 a.m. By the time I returned from the Longacre Theatre, 13 students had been taken to the hospital, and countless more had needed medical attention but didn’t want their parents to get a call about their illicit behavior. The concert was just winding down, and the Low steps were trashed. I had heard tales of Bacchanals past, where condoms covered the floor like New York City sludge in February, and I kept my gaze far from the ground because I had no desire to find out if the legends were true.

That night, as most of campus either melted into a Bacchanal-induced coma in floor lounges or continued the binge with after-parties, accepted students arrived for Perspectives on Diversity, a program intended for prospective undergraduates who are interested in the multicultural aspect of Columbia. As part of the Undergraduate Recruitment Committee, I’m required to house prospies in my dorm room and show them a safe, good time while they’re visiting, so I was surprised when other hosts stumbled down the steps of Lerner Party Space to grab their guests, barely able to walk or form coherent sentences. The juxtaposition was comical: expectant, eager high schoolers with their backpacks and sleeping bags surrounded by both literally and figuratively tripping teenagers who were looking for a hook up to end the night. Perspectives on Diversity was more a preview of how sloppy incoming students could get in their second semester of college than an insightful introduction to the cultural possibilities that await them if they attend Columbia.

Maybe I’m too uptight, but I was surprised by how hedonistic Bacchanal really was; it seemed as though the student body threw all of their vices and pent-up restlessness into one gigantic cesspool of sex and drunkenness for less than 24 hours. In fact, the Columbia Daily Spectator ran an op-ed the Sunday after last year’s celebration that criticized the tendencies for inappropriate physical behavior and sexual assault, and the writer named substance abuse as one of the contributing factors to groping, grimy perpetrators. Students who say that the day is devoted to community building may be right, but it’s not exactly the community that I want to call home, and it’s definitely not representative of Columbia on a daily basis. That this was the school that admitted students saw before making their final college selection seemed unfair, because whether they were all for the party culture or they found it disgusting, their judgment was skewed by a festival that isn’t true to Columbia’s core.

Now, while some of those prospective students head to Morningside Heights for their first day of class, having an all-new Bacchanal on September 14 seems like one of the worst ideas I’ve ever heard. The initial month of college is exactly when most first years try to go down the rabbit hole, and a call from Bacchus on a Sunday might mean more than not getting through The Iliad by the following morning.

Dylan Olivia Hunzeker, a sophomore at Columbia College, also noted the possible detriments of a Bacchanal-esque undertaking just two weeks after the start of the semester. “I think that for incoming freshmen, fall is too soon to host a music concert,” she explained. “Generally at Columbia, people don’t know how to drink. Most of the people who first come to university here didn’t have avid drinking lives in high school, so when they start drinking first semester, things can get wild. Many students don’t drink casually, so at concerts like these they tend to go overboard.”

However, while almost everyone agrees that Bacchanal is crazy, many undergrads still advocate its virtues. “Bacchanal is in a word insane. It is insane in a good, fun-loving way. It provides an opportunity for release and ecstasy in an often stressful academic environment,” Kevin Staples, also a sophomore in Columbia College, claimed. The majority of the student body approves more of his take than mine, collectively decrying the administration for its untimely action against an event that promises a pause in the semester-long race that is Columbia academic life.

I understand the complaints of my peers; a group of my classmates has been working hard since last spring to pull together fun, freeing festivities to help everyone unwind as the workload starts to stack up, and now, their efforts have gone to naught. Nevertheless, I don’t think another Bacchanal’s the way to go if we’re looking to build healthy environs on 116th and Broadway. Hospital trips and hangovers on Monday won’t help anyone as we try to fall back into the rhythm of college.

Sure, Columbia’s stressful. In 2011, we were ranked number one in the Daily Beast’s “America’s 50 Biggest Pressure Cooker Colleges,” and most Lions are frenemies with the infamous all-nighter. I also get that every spring, all of the other Ivy League institutions have their own versions of Bacchanal, and certainly the wildness that defines our concert isn’t constricted to the Upper Westside, nor is Columbia’s highly publicized problem with sexual assault.

But frankly, I’m just excited that, at least for this semester, there won’t be a day when I constantly have to worry about avoiding vomit as I ride the elevator to my dorm room. 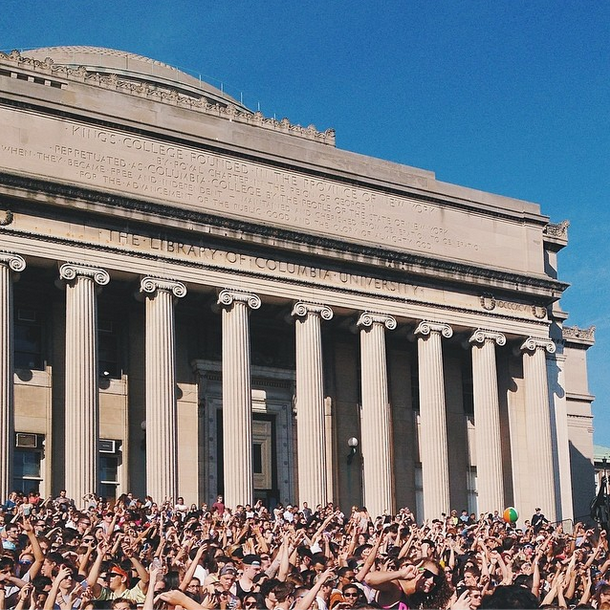