To ensure people will like you before you even get to San Juan del Wherever:

DON’T: Be a racist, homophobic, bigoted asshole. In other words, don’t be contestant John Rocker, the former Atlanta Braves player who once said this when asked if he’d ever consider playing for New York. “I’m not the loud, obnoxious, boisterous kinda guy,” he tells the camera, “but the media has loved over the years to label me racist, homophobic, bigot, everything else.” It’s hard to see why they’d say that, John.

When, on the first night, you and your partner are required to survive on your own:

DO: Be like Broadway BFs Josh and Reed, who somehow make a freaking unbelievable fire, catch a live crab, and concoct the Survivor equivalent of a meal at Per Se.

The next day, you and your loved one will have to split into separate tribes — in this case, Coyopa (orange) and Hunahpu (blue). When it’s time for the reward challenge, and you (Jeremy) have to go up against your wife (Val):

DON’T: Look at or listen to Jeff Probst. Ever. Jeff Probst is a cross between a frat bro and Maury Povich. He’s incredibly irritating, and way too excited about turning loving family members into mortal enemies. “Now THAT’S how you do it on Survivor!” he cries, almost wildly, as Val hauls herself over a beam or something and catches up to Jeremy. Settle, Probst.

ALSO DON’T: Get ridiculously emotional and weep actual tears when Val loses and gets shipped off to Exile Island. Let’s put this all into perspective, everybody. You are not getting divorced. Nobody is dying. This isn’t the Hunger Games. You’re on a primetime CBS reality show, and I’m preeeetty sure they’re even giving you deodorant and disposable razors.

Good lord, Keith, are you crying, too?

When you get back to your tribe’s camp after the first reward challenge:

DON’T: Be all, “I’m the popular guy. Everybody wants to date the prom king” just because you beat your wife in a challenge that required little to no actual skill. There’s only been one commercial break since Jeremy carted his dearly beloved off to Fuck You Island, and already he’s trying to make alliances with as many ladies as possible. “I have a good rapport with women, I get along with women, so it’s time to go balls to the wall and start to play,” he says. No, seriously, he says that.

DO: Literally everything Dale is doing. He finds a mysterious token near the well, and though he can’t find an explanation as to what it is, he keeps it for later, just in case. Is that even a thing you can do?! Are the producers aware that Dale is hacking the mainframe?!

Sorry, but I’d like to take a quick break to point out that Jaclyn looks exactly like Britney Spears circa 2009:

When you get over the initial excitement of ~being on Survivor~ and it’s actually time to figure out how the hell you’re actually going to survive:

DO: Start a fire by being a goddamn genius like Dale, who finds a hollowed-out coconut, stuffs it with kindling, and sacrifices his own seeing contraption (a.k.a. glasses) to ignite the coconut’s contents.

DON’T: Try to start a fire like these buffoons.

When you’re stuck on Exile Island because your husband  was tragically forced to send you there:

DON’T: Attempt to use any logic whatsoever. The whole idea of Exile Island is as un-complicated and as un-interesting as an episode of Cupcake Wars. Val and Keith — who Jeremy picked to join Val — each have to choose between two urns stationed on a table. One (Val’s) contains a clue about a hidden immunity idol back at her camp. The other (Keith’s) contains a blank piece of parchment. When picking your Exile Island urn, you either get a clue, or you don’t. It’s a 50-50 chance. There’s literally no strategy.

Back at camp, when it’s time to make a shelter so you’re not sleeping on spiky rocks or kidnapped by those terrifying howling tree monkeys:

DON’T: Casually catch some waves while the rest of your tribe toils away in the blazing Nicaraguan sun, no matter how badly you want all the ladies to like you.

And even if you’re one of the people building the shelter, DO NOT: Be like Drew, and get all show-off-y about how amazing you are at building shelters. “I’m a genius,” he says as he squeezes a log in between two tree branches, and then launches into to a spiel about how he also used to be a model, by the way.

When it’s time for the immunity challenge:

DO: Keep ignoring Jeff Probst. It’s cool how he’s wearing the same outfit at the immunity challenge as he wore at the reward challenge, as if we’re supposed to believe he’s been roughing it just as much as everyone else. Again, settle Probst. We know you are staying at the Holiday Inn: San Juan del Sur.

DO: Make people forget that you’re a racist, homophobic, bigoted asshole by letting your fellow tribe members use you as a human ladder, potentially stepping on your face in the process.

DO: Get your tube top under control. I guarantee it will make all physical challenges 146 percent easier.

When you lose the immunity challenge and have to make desperate, pre-Tribal Council alliances:

DON’T: Attempt to bring Josh, who’s gay, over to the girls’ alliance by telling him you see him as ~one of the girls~. Shockingly, Nadiya, that’s offensive to him. Who knew? While Nadiya’s certain Josh will join the women and vote out Dale, Josh seems way too peeved by her comment to join them.

DO: Be more like Dale, as usual. Dale’s seen Nadiya on the Amazing Race, and knows she’s not afraid to backstab people. Because nobody likes getting backstabbed, Dale recruits some other members of the Hunahpu tribe to vote Nadiya outta there.

When you get to Tribal Council:

DON’T: KEEP TALKING ABOUT HOW ~GIRLY~ THE ONE GAY MAN ON YOUR TRIBE IS. “I think the fact that he’s gay helps me,” Nadiya tells Jeff Probst. “Obviously I’m not going to consider a straight guy, ‘girlfriend!’” OMG PLEASE STOP TALKING FOREVER.

Evidently the majority of people on Hunahpu agreed with me, because Nadiya became the first contestant voted off the show. 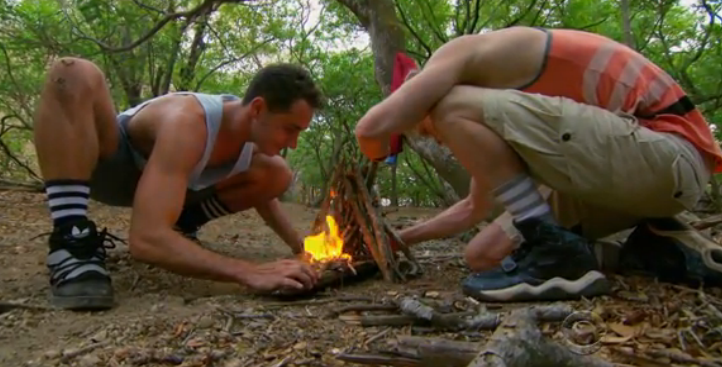