Of the exceptional character of the humble egg there can be no doubt. Mankind would clam up and shut down if not for the munificent offices of the eggy weg.

Set aside, for a moment, omelets, scrambles and slithery poaches. Ignore the hard-boiled ephors in their shapely holders. There would be no hollandaise without eggs, no muffins, no frescos, no Mork and Mindy. And yet the egg has never been properly thanked. No one has ever met an egg he didn’t want to beat, boil or break. Eggs are the unloved enablers of a million meals.

But a bit of good news for eggs just came over the transom. Last month, Sarah Schneider, a former fashion industry executive, and Demetri Makoulis, a film producer, opened Egg Shop, a restaurant in Nolita that professes to give eggs their due. Like the object of their affection, the space is self-contained, white and welcoming. Not being chefs but simply eggheads, the young lovers retained the talents of Nick Korbee, an underrated chef formerly of Smith & Mills, whose furrowed brow is often visible in the open kitchen, under a blackboard on which the restaurant’s requisite social media manifestations are listed.

Though one might be led to believe that Egg Shop is an equal-opportunity egg appreciation society, the adoration of its owners is limited to the egg sandwich. No sandwich deserves it more. Greeting the morning like a kyrie eleison, the egg sandwich is a matutinal hymn, and like any polyphony, its success depends on the harmony of its voices. In the ideal version, a salty bacon backbone gives form to the diffused warmth of the egg, and a mild cheese provides longevity to the mouth-feel. The roll is a delivery system and a mouth-filler, but like Andy Richter, its most important assets are that it is doughy and inoffensive and knows when to scooch over on the couch.

Eight egg sandwiches are on the menu at Egg Shop, and they range from gussied-up versions of classics to more outré mutations. The former include the Egg Shop B.E.C ($9) made with a broken yolk, Shelburne Farms cheddar, black forest bacon, tomato jam, and fresh pickled jalapeno, all served on a Panini roll; and the Fish Out of ($11), which features smoked salmon, pickled egg, fresh dill and caperberry mustard on rye. More creative, ab ovo specialties, include the steak and egg sandwich ($15) and The Beast ($13), in which pulled pork carnitas and a sunny-side-up egg find common ground on a French hero.

Are these haute egg forays successful? That’s a loaded question. Mr. Korbee is an inventive guy and has the suppliers and technique to buttress his gumption. The Panini in the B.E.C., from Pain d’Avignon, has a splendid slight crustiness with a more robust than usual interior. The caperberry mustard in concert with the caraway rye, the silky smoked salmon (more texture than taste) and fresh dill are real-deal Russ & Daughters quality. But does either sandwich showcase the egg? Neither does.

An egg is an enigma. An egg is a solipsist. An egg contains life itself, which makes turning up its flavor difficult. But if one increases the quantity of cheese, bacon and bread in a classic egg sandwich, this is precisely what one would have to do in order to maintain the architecture of power. And it’s even more important when one adds a sweet and addictive tomato jam, chipotle bourbon ketchup or chimichurri relish. Mr. Korbee hasn’t solved this problem in many of the sandwiches—often bread is the tyrant (rye trumps pickled egg) and sometimes it’s the condiment (the B.E.C. is ruled by the tomato jam)—but in a few he comes close.

In the steak and egg, for instance, he shaves his tenderloin, Philly-style, and serves it on a hero. Where I’m from this would be topped wit’ whiz or provolone and called a cheesesteak. But Mr. Korbee wisely sees that a sunny-side-up egg can, in a pinch, make do instead. The sandwich benefits from his insight. There’s a lot going on here: steak with egg with chimi-chili relish (what it sounds like), caramelized onion aioli and pickled jalapeno. But it beats Pat’s and definitely Gino’s. Jim’s doesn’t stand a chance.

And it’s not all sandwiches either. There’s a mean Bloody Mary and a short but good wine list. Plus there are bowls of eggs called cruisers. Liberated from the constraining power dynamic of the egg sandwich, here is where Mr. Korbee comes through. A simple bowl of scrambled eggs, with scallions, corn and tomatoes, does more to proselytize the divinity of eggs than Easter ever could. El Camino, in which carnitas and a poached egg meet again, this time with avocado chaperoning, is a much better iteration of that match-up than The Beast. One will never be satisfied with carnitas again after having carnitas soaked in egg yolk. Never.

For the non-egg aligned, a) Why are you here? and b) Don’t despair. Mr. Korbee’s fried chicken, which is offered as a side ($7) or an add-on ($4) to an egg salad (which surely can’t be kosher), is among the best I’ve ever had. Made to be sandwiched, the chicken thighs are deboned, soaked in spiced buttermilk, deep-fried and served with wildflower honey and sea salt. There’s no egg here, except as an ontological implication.

I wish, however, Egg Shop went further and was even eggier. As it stands, Egg Shop doesn’t feel so much like a celebration of eggs as a restaurant in which nearly every item has an egg in it. How can a temple of eggs deny me the sacrament of an omelet? I should like a hard-boiled egg or the perfect poached egg on toast. There is a small bar program here too but no pisco sours or ramos gin fizzes. Please explain.

Alas, not everything, not even appreciations of it, can be as perfect as an egg, nor as eggy as eggs can be. Egg Shop deserves a star for seeing in the egg sandwich a thing that demands celebration. For liberating from the breakfast and brunch yoke yolks, another. And a third for offering a warm and inviting place to eat scrambled eggs at 11 p.m.

For eggs should be like prayers, said morning, noon and night. 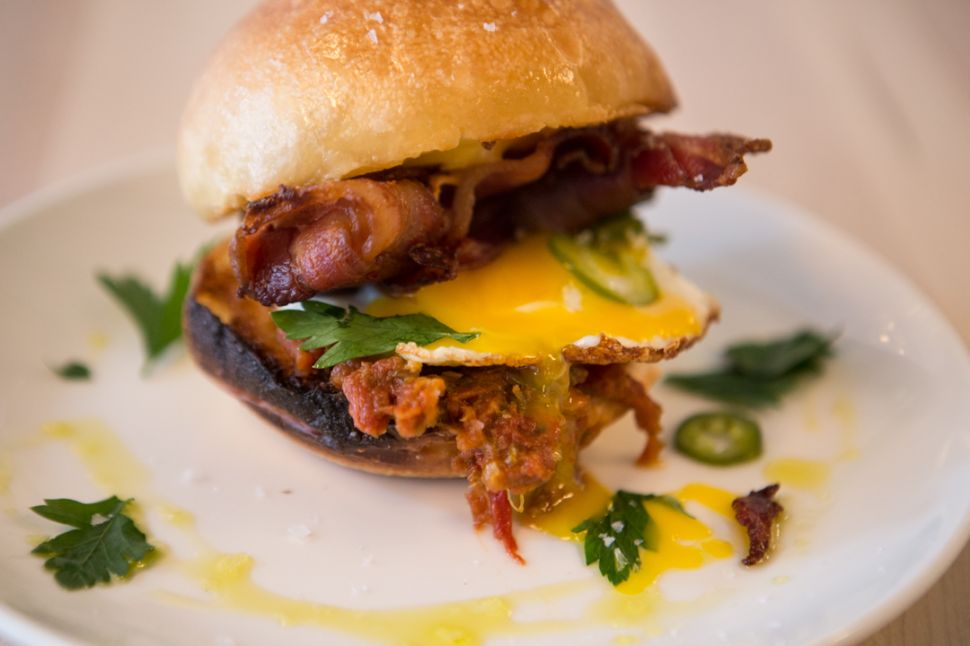