First things first: a bulletin from the Corrections Department. My eagle-eyed compadre Eric pointed out that I’ve been misspelling the first name of television’s nattiest drug dealer—it’s Lemond, not Lamont. Mr. Bishop is, regrettably, not a character from Sanford and Son, so I’ll stop spelling his name as though he were. This recapper regrets the error.

Now then. It’s 9pm. Do you know where Cary Agos is? Spoiler alert: still in jail. And Alicia seems powerless to do anything about it. In the meantime, she’s stopping by to conduct firm business when she drops the bomb: Diane is coming over to Florrick/Agos as a named partner. Cary’s pissed because he wants to vote on it, but he’s got bigger fish to fry, like the guy cuffing him and dragging him back to his cell. Where’s Taye Diggs? I was told there would be Taye Diggs.

Diane and ASA Polmar square off in court over the source of Cary’s bail money. Finn wants to call Alicia to the witness stand to grill her about the “business” that the money came from, and the judge allows it. I feel like that judge will allow anything as long as you request it from behind the bar. From verbal tics to germophobia to this guy’s personal space issues, The Good Wife always manages to make its judges into genuinely interesting characters. You know who else is an interesting character? Taye Diggs. Need to see him. Thanks.

Diane and Kalinda visit Cary and let him know that he was recorded coaching Bishop’s guys on how to smuggle heroin into the country. Cary pinkie-swears that he said nothing of the sort and that the recording must be doctored, and so Kalinda’s probably off on a mission to track down the guys on the recording and figure out which one of them wore the wire. I think that’s what happened in the scene, but I had a hard time concentrating because Taye Diggs.

Alicia and Other Carey are trying to save Chumhum as a client when Lemond Bishop comes by and threatens to pull Cary’s bail money if the ASA makes him testify. Bishop is all about showing up places in really expensive suits and threatening people. Meanwhile, Alicia’s ghetto office is undergoing some construction. I’m with Bishop — Alicia, boo, you’re an important attorney and the governor’s wife. You need a door. And I need Taye Diggs.

Peter’s doing a spot on CBS This Morning when Valerie Jarrett, of all people, shows up, and Eli’s all “you promised to hire me” and Valerie’s all “Gurl, bye.” Eli tries to recruit Val to help him convince Alicia to run for State’s Attorney. I told you, he is NOT letting this go. Meanwhile, Alicia’s on the stand and ASA Polmar goes a-grillin’. I like Finn, I really like him, but don’t come for Alicia. Especially when Diane’s there to object to just about every single thing coming out of Finn’s mouth. But uh oh, the front business that supplied Cary’s bail money wasn’t very good at being a front business, because it had dead people listed as clients. So ASA Polmar, OF COURSE, insists on questioning Lemond Bishop to enter all this stuff into evidence. Hope Cary’s comfy in jail.

And then Taye Diggs happened. And all was right with the world. Taye’s playing a lawyer named Dean Something-Or-Other, but his character should be named Taye Diggs. Did that name not clear? Diane calls a meeting to announce that Michael J. Fox is going to be taking over for her, and David Lee tries really hard not to spray his shorts with glee. Diane gets alone in the elevator with Taye Diggs and, instead of making out with him like she should’ve, is going on and on about how he should come to Florrick/Agos with her.

Lemond Bishop’s kids play soccer, y’all. And like any good drug kingpin dad, he comes to all his son’s games and screams incredibly loudly and freaks out all the white people. He allows Kalinda to find out which one of his guys wore the wire that brought Cary down. He’s probably going to kill whoever the mole is, but I’m glad he’s finally agreeing to something, because I was getting quite sick of him being a total buzzkill.

Alicia manages to get a second mortgage loan to raise money for bail, but there’s one hitch. Peter also owns the apartment and has to sign off on it. That’s setting up a fun Peter/Alicia scene later. Just then, Valerie Jarrett calls (why not?) and butters Alicia up like a piece of toast from a script Eli wrote. Apparently, all this has made Alicia so busy that she just completely walks by Taye Diggs without saying hi or pawing furiously at his crotch.

Lemond Bishop’s guys come to Lockhart/Gardner to insist that Cary was only talking hypothetically on that recording. And because they’re criminals, one of them has to have teeth made of a precious metal. Kalinda, because she’s smart, knows Bishop’s top guy was the mole. Clearly someone’s going to die.

Peter, as Illinois governor, won’t sign off on the second mortgage to bail out an accused criminal, because Illinois governors really have to stop getting indicted for things. But Alicia also knows this is about him punishing her, and they trade some below-the-belt accusations before Peter splits. I love when the show digs into Peter and Alicia’s marriage, which has always sort of been a marriage of convenience. Speaking of which, where are Zach and Grace?

Taye Diggs comes to Diane and tells her how ghetto the Florrick/Agos offices are, but Diane makes an impassioned speech about how women and black people should be running everything. I couldn’t agree more. And Taye agrees too, because he ultimately takes Diane up on her offer, and brings six department heads with him. Boom goes the dynamite. Cary gets outvoted and Florrick/Agos officially becomes Florrick, Agos, and Lockhart. But if Cary had stayed on the jail phone, he would have heard his colleagues take another vote to use Chumhum’s fees to bail him out. This is a relief, because I was about to start printing FREE CARY T-shirts. Oh yeah, and Alicia definitely crushes Lorraine (who wouldn’t hire her that one time) in the Chumhum case. Alicia’s a boss. Or, as Lorraine put it, she’s an assassin. Like I said. Don’t come for Alicia. It’s also telling that in prior seasons, The Good Wife would have hung an entire episode on this Chumhum case, but here it almost feels like an afterthought since the show is pulling so many other compelling narrative threads.

And then there was that rich guy who offered Alicia a cashier’s check for Cary’s bail if Alicia will run for State’s Attorney. By this point, everyone in America wants Alicia to run for State’s Attorney. I was born and raised in Chicago and can’t name a single person who has ever been Cook County State’s Attorney, but on this show it is the most important job in the world. Alicia, smelling a rat, asks Eli if he put the rich guy up to it, and Eli denies it, and then Alicia says “I’m not running” about five hundred thousand times to five hundred thousand different people. The episode should actually have been titled “I’m Not Running.” But P.S., isn’t she totally running? It’s kind of like when Hillary Clinton says things like “I’m still making my decision” as she lands her plane in Iowa.

Meanwhile, Lemond Bishop totally kills Diane’s star witness, and now Diane and Kalinda are just down to the real mole and one other guy. Then, back on the soccer field, Bishop tries to strong-arm Kalinda into telling him who the mole is, or he’ll basically kill everyone.

The episode closes with a first for Cary and Alicia: a hug. It’s heartwarming to see these two so close now. They really are the next Will and Diane. 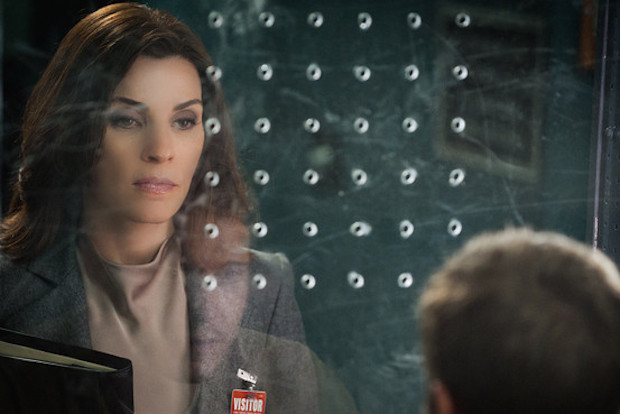