Beyoncé, all curves in silhouette, stood before the glowing word “FEMINIST” at her Video Music Awards performance this summer. Taylor Swift had an “epiphany” after her long discussion on the topic with Lena Dunham. Nicki Minaj’s self-confident music video for “Anaconda,” was released. Feminism, it seems, has become a buzzword in pop culture. Now, there’s a wave of it hitting the contemporary art world.

But even in a progressive city like New York, the label of “feminist art” can still hold a sort of stigma. Two LES gallery shows, “Milk and Night” at Gallery Sensei (through September 21) and “Future Feminism” at The Hole (through the 27), are challenging that, using art to reconsider feminism as an all-inclusive movement that looks beyond class, race — even gender. The two shows—while independently organized—feature overlapping participants, concurrent visual arts exhibitions and lots of live-event programming including some big art stars that taps into the realms of music, fashion, and celebrity.

With over 20 artists from a variety of disciplines, “Milk and Night” brought a genuinely inviting atmosphere to the second floor gallery on Grand Street at its opening. It’s a group show with artists ranging from iconic figures in the feminist art community, such as Betty Tompkins with her delicate intercourse painting, to younger artists like India Salvor Manuez, who displayed a well-worn bra as part of the exhibition. A portrait of a young woman painted by actress and artist Jemima Kirke hung next to a collection of Instagram selfies from Ange of the noted fashion collective ThreeASFOUR. Anne Sherwood Pundyk, a co-curator and editor of feminist art magazine Girls Against God, contributed a large abstract painting installation titled The Revolution Will Be Painted, which spoke to the exclusion of women in the art world. A special musical set by cult filmmaker and performer Kembra Pfahler drew crowds to the show’s opening night.

Inclusiveness is a major theme in many of the works, highlighting a new attitude towards feminism in pop culture. Many of the artists of “Milk and Night” pay homage to are the strong female celebrities who embrace femininity and sexuality as a symbol of strength. Ms. Pundyk believes bringing together recognizable names in art, music, and pop culture is an easy way to get people to at least start listening. “[Popular entertainment] is without a doubt a powerful vehicle for change,” she said, and although new feminism has gotten public attention because of these artists and pop star’s involvement, “the ongoing challenge is to open access to visibility within all media.”

The belief that feminism can be an intrinsic part of living, rather than reduced to a political posture—that everyone is inherently a feminist if you believe in equality—is a unifying theme between the work at “Milk and Night” and The Hole’s “Future Feminism.” The latter—organized by musicians Antony and Johanna Constantine (of Antony and the Johnsons), Ms. Pfahler, and Bianca Casady and Sierra Casady of the popular CocoRosie—is a new manifesto that has been work-shopped for years, resulting in 13 tenets of the cause.

Inside the crowded gallery opening, a sleekly simple physicalization of the group’s work was displayed: a series of thirteen rose quartz shields each carved with a single principle. The tenets read like commandments—literally set in stone—but the tone was still a gentle and nurturing one: “V: Relieve men of their own roles as protectors and predators,” and “II: Future Feminism requires the participation of all people.”

The Hole has put together a thirteen-night lecture series where one tenet will be explored every evening at 8 p.m., complimenting the work on view in the gallery. Open and free to the public, artists like Marina Abramović, Carolee Schneeman, Terence Koh, Kiki Smith, and more, will confront future feminism through performances and discussion.

Katie Cercone, a co-curator of “Milk and Night” and member of the collective Go! Push Pops, believes that the future of the movement is genderless, raceless, and boundaryless. Ms. Cercone said, “It explodes all definitions of what (feminist) art is and who should make it.” 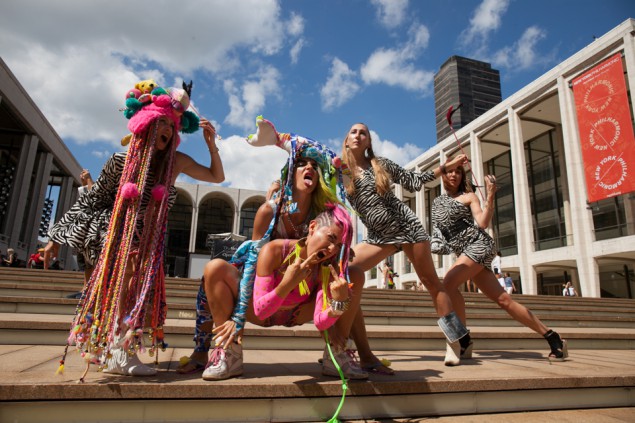