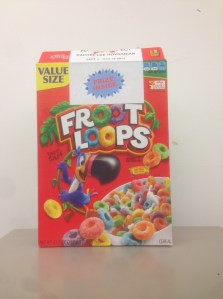 The invitation in question. (Photo by Nate Freeman)

A few days ago, we received in the mail a strange package: a box of everybody’s favorite super-sugary breakfast cereal, Froot Loops. It’s not often well-wishers send us parcels containing Fruit Loops, so we put the thing off to the side. Was there actual cereal inside? We don’t eat cereal, so who cares.

Well, now it’s Labor Day, and we’re in the office, so why not open the box of Froot Loops already. Plus, it says, in big letters on a decal, PRIZE INSIDE. Who doesn’t like prizes? Hopefully it’s, like, a cool action figure.

Well, the prize turned out to be a catalog for Rachel Lee Hovnanian’s new show at Leila Heller gallery, “Plastic Perfect,” and the box serves as an invitation to the opening reception this Thursday. Sending a big colorful box with an image of Toucan Sam emblazoned on the side is certainly a way to stand out in the midst of a million openings, but what does Froot Loops have to do with the show? Is it a total non-sequitur? Well, after sorting through small packets of Rice Krispies, Wheaties and, yes, Froot Loops stuffed in the box, we found the catalog, and inside is a picture of a work Fruity Delight in Every Bite, 2014. It’s an installation of 28 boxes of Froot Loops mounted in a grid, with some white acrylic thrown on there for good measure. Synergy!