So after weeks of simmering tension, The Knick finally came to blows this Friday night. Unfortunately it was Doctor Gallinger who gave Doctor Edwards a black eye, and not the other way around, but hey, we can’t have everything. (Anyway, had their positions been reversed, Doctor Edwards may well have found himself in prison.)

Inspired by this outbreak of violence, here is a rundown of every character that I wanted to punch in the face this week. Or maybe just give a stern talking-to to. A writer needs his hands, after all.

1. Doctor Everett Gallinger: He’s the worst, but we already knew that. Still maintaining that Edwards somehow scammed his way into a medical degree, against all evidence that he is an extremely talented doctor, Gallinger refuses even to let Edwards near the body as he talks them through the operation that Edwards himself co-designed.

When Edwards decides to just stop talking at a critical moment unless he is allowed to continue the surgery himself, Gallinger hesitates for a full minute—nearly allowing the patient to die—before handing over the knife. Way to put someone’s life at risk rather than admit that a black man might know something you don’t. Then he throws the aforementioned punch. So, lesson clearly … learned?

Later, Gallinger continues on with his usual racist shit, like getting mad when Edwards—who, let’s not forget, is technically Gallinger’s superior and supervisor—has the audacity to check a patient’s chart. (Said patient is a meningitis case who slipped while engaging in the utterly charming sport of rat-stomping and got bitten all over his legs.)

And then he goes home to tell racist non-jokes about Edwards to his wife, who explodes into giggles. Someone should probably tell her that her husband is even less funny than he is tolerant. But honestly, is there anything more boring than trying to explain to bigots how humor works?

2. Doctor Algernon Edwards: Good as his motives may have been, playing a game of chicken with the life of an innocent man who lies bleeding out on an operating table is totally insane. You have a point to make? Cool. Don’t sacrifice a stranger, whom you’ve taken an oath to protect, to make your point. Edwards is damned lucky Gallinger flinched first.

3. Doctor John Thackery: Oh, where to begin? He watches the standoff between Gallinger and Edwards with barely restrained glee. What a terrific show! Intolerance and a cavalier attitude toward human life all at once! And then, after Gallinger throws his punch, he yells at him—not for hitting Edwards, mind you, but for doing it with his delicate surgeon’s hands. “Next time, kick the man,” he admonishes, to delighted chuckles from the gallery.

4. Inspector Jacob Speight: Oh boy, this guy. Pro tip: When actively trying to demonstrate the idiocy of class structures, it’s probably best not to ratify every single stereotype that the rich have about boorish social climbers.

In just one conversation with a wealthy woman whose family has been ravaged by typhoid fever, he manages to denigrate her home, insult her butler, suggest that she doesn’t wash her hands after using the toilet, and insinuate that her recently deceased husband was a philanderer—all while availing himself of as much of their hospitality as he can, drinking their expensive coffee with slurping gusto, and smiling smugly to himself, as if he were really sticking to the toffs.

5. Pretty much everyone at the Robertsons’ party, including but not limited to:

– Cornelia’s mother Victoria, who greets Doctor Edwards effusively, and then just tells him to head into the back to see his mother—who, it turns out, is the family’s cook (his father is the chauffeur). Party foul! Guess the color of his skin made you temporarily forget that he’s an honored guest in your home and was specifically invited by your husband?

– Cornelia’s fiancé Philip, the guest of honor, who decides that the best way to drop the bombshell on an unsuspecting Cornelia that they will be moving to San Francisco after the wedding is via an offhand comment at a party.

– Some dude named Hobart Showalter, who brags to Edwards that he barely even has to pay the workers at his Ecuadorian rubber plantation. Dude, it is 1900, and you are at least 50 years old. You were alive during the Civil War. Maybe have an ounce of perspective and don’t make jokes about slavery in front of a black man?

(Showalter does give Edwards the idea of looking into new innovations in rubber for use in surgery, and Edwards buys himself a brand new electric vacuum cleaner to use for surgical suction. Now if he can only figure out how to turn it on.)

– Thomas Edison: Not because he does anything bad in the episode, but because he was sort of a jerk in real life. This is the guy who electrocuted an elephant. And filmed it. And then released a movie about doing it.

6. Herman Barrow: Not only is this creep stealing dead bodies and selling them to support his hooker addiction, and not only is he giving the grieving families canisters of pig ashes and claiming they are the remains of the deceased, but then he’s charging them a fee for the task of fake-burning their loved ones. Classy.

7. Thomas Cleary. The Knick’s ambulance driver has never been a shining light of goodness, but this week he gave morality his best shot and still managed to end up a horrible person. Finally bringing the hammer down on Sister Harriet for performing abortions, he claims to be both religiously opposed to it and willing to take a large cut of her fees to ignore his faith and not turn her in.

Then, when a girl dies after trying to terminate her own pregnancy, he has a change of heart. He’s still morally opposed to abortion, but sees the value in what the good sister is doing if it will prevent such horrible botched self-surgeries. But he’ll still take the same large cut of her fees. So…not so much a change of heart as exactly what he was doing before—only now he’ll stand mournfully over a mass grave in a potter’s field while he extorts money from a nun.

8. Doctor Bertram Chickering Sr: “I worked my ass off for years so I could afford to send my son to medical school so he could become a well-respected doctor. Not so he could treat sick people. Ew.” 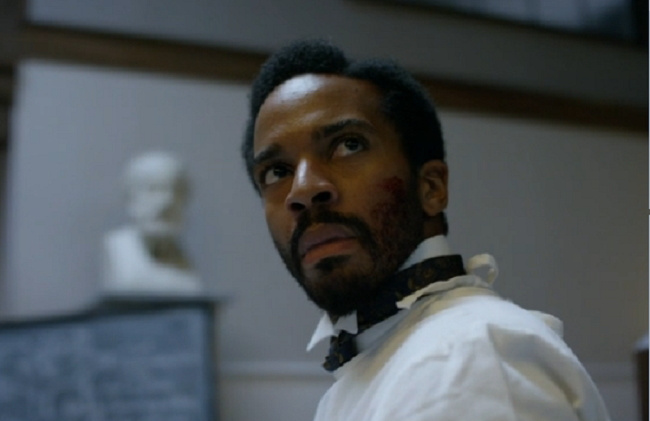