Halfway through its first season, The Knick appears to be foundering a bit. Now that the story arc of Doctor Edwards’ “galvanic procedure,” which provided some connective tissue for the last three episodes, is finished, the show has fragmented into a series of overlapping stories.

Not that overlapping stories can’t be great for an ensemble show, but we at least need to care about the separate characters and their motives for them to work—and unfortunately most of these people are not particularly likable. It’s hard to generate a great deal of interest in the tribulations of a racist asshat while he has a desultory conversation with a misogynist prick about how humid it is in New York City.

The show’s namesake hospital is also foundering, of course. Successful hospitals have been following the rich uptown, and the Knick, left downtown among those who cannot pay much for their care, can barely make ends meet. This is before public hospitals were widespread, of course, and if the Knick goes uptown—as several of its board members insist it must—the poor will be left with few options.

The episode opens with a disturbing example of one of these options: a barbershop surgeon. He shows up drunk and still drinking, doesn’t even wash his hands before examining the patient, and prescribes bed rest. For a bullet wound in the thigh. If this is the alternative to hospitals, it’s no wonder humanitarians like Colonel Robertson insist that keeping the Knick downtown is a public service.

The guy with the hole in his leg is a henchman and the brother-in-law of mob boss Bunky Collier. Collier doesn’t want to take his man to the Knick, lest Herman Barrow, who owes him a half a gajillion dollars plus interest for the services of the hooker Barrow is in love with, is able to use this opportunity to defray his debt. But left with no options, they bring him in, and Doctor Thackery is woken up out of his drugged stupor early in the morning to operate.

The only doctor on the premises to assist in the surgery is Doctor Edwards, who is just coming off shift in his secret basement clinic. He’s just seen a patient named Mr. Mendieta, a Cuban cigar-roller with a grapefruit-sized hernia. At first hesitant, Mendieta warms up to Edwards and gifts him with a good cigar. Edwards and his army of nurse-laundresses later fix Mendieta up with a new technique using silver thread, which Edwards has to pawn his watch to buy.

Thackery and Edwards perform the surgery on the gunshot victim, with Collier sitting in the theater with his hand on the butt of his gun the whole time, threatening to kill them if his man loses his leg. It’s touch and go, and Thackery fears the man may bleed out before they can even amputate. But eventually, with the help of a mean-looking pair of shears, they patch the guy up. He’ll make a full recovery, and Barrow gets a few bucks knocked off his tab.

Sadly not making a full recovery is the third surgery patient of the episode, a case of placenta previa, the very same thing that drove Doctor Christiansen to suicide in the pilot. Thackery, with Bertie assisting this time, does the surgery faster than anyone ever has before, but they still fail. Clearly, the fault is with the method, not the skill or speed of the surgeon.

Notably absent from both surgeries is Doctor Gallinger, whose infant daughter has become very sick from what they think is meningitis. Being that Gallinger’s last patient was the bitten-up rat-stomper with meningitis, perhaps they’ll finally start to think about wearing gloves when they treat patients? I cringe every time I watch them reaching into open wounds with their bare hands.

Meanwhile, Barrow finds a better way to get rid of his debt than waiting for more of Collier’s men to get themselves shot. He makes a deal with a beat cop in the Tenderloin—he’ll introduce him to Collier as a pipeline of girls for Collier’s whorehouses. The hookers the cop arrests on his beat can avoid jail and get a roof over their heads. And they’ll both take a cut, of course.

Cleary is stymied in his attempt to take his own cut of Sister Harriet’s abortion money, because the nun refuses to perform a late-term abortion on a Chinese woman. Apparently in her moral code, it is a sin to terminate a pregnancy if the baby is kicking. So Clearly doesn’t make any money. He does get lots of great opportunities to be totally racist, though! And about someone other than black people for a change.

Just as Edwards is relaxing at home and smoking the cigar that Mendieta gave him, he is interrupted by Cornelia Robertson, with the news that his mother is very ill. He rushes to the Robertsons’ to treat her, but is beaten to the punch by Thackery, who determines that her lower back pain is not caused by appendicitis, as Edwards suspects, but just a cyst.

After popping the cyst by squeezing her whole body before her son’s incredulous eyes, Thackery goes outside to have a chat with Colonel Robertson about Cornelia. Robertson may be a do-gooding philanthropist and a patron of scientific advancement, but that doesn’t mean he’s not a reactionary old fart. Proud as he is of his daughter for basically running the whole hospital, he insists that soon she will quit that silly nonsense and start popping out babies. Charming.

He does, however, agree to buy the hospital an extremely expensive new invention: an X-ray machine. Thackery insists that it will revolutionize medicine in the space of a year. And over dinner, Barrow convinces Robertson to shell out the cash—with an assist from Robertson’s rival Vanderbilt, who brags that he just bought two of them for a hospital himself.

And speaking of newfangled contraptions, Thackery and Nurse Elkins continue their weird flirtation as she tries to teach him to ride her bicycle. Poor lovestruck Bertie is going to be very disappointed when these two finally stop all this foreplay of bicycles and injecting drugs directly into their dicks and just go for it already.

And finally, Health Inspector Speight is still antagonizing New York’s rich and famous by invading their homes and grilling them on their hygiene in an attempt to root out the causes of an upper-class typhoid outbreak. This subplot is incredibly boring, but it did lead to the best exchange of the whole episode:

Speight is interviewing Miss Carhart, the house manager of a rich family, and insists that he meet with the master of the house.

Miss Carhart: “Mr. Cook left word that he was not to be disturbed.”

Inspector Speight: “That ain’t up to him. For all his money he shouldn’t think that he’s immune to this disease. Unless of course he’s got a servant who wipes his ass for him.”

Miss Carhart: “Don’t think for a moment he doesn’t.” 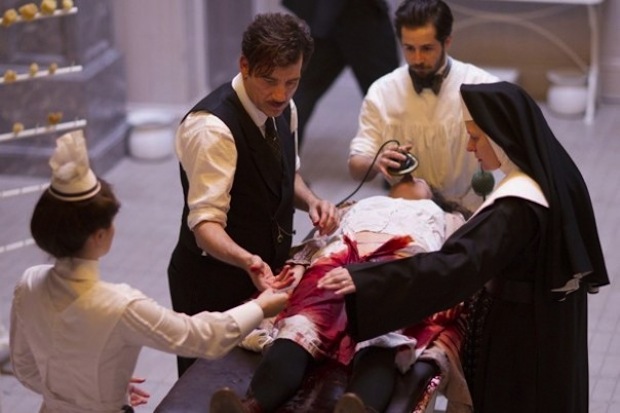