I love it when you call me Big Poppa.”

Everyone knows it’s fun to encounter a name we know from history on a show set in the past. It gives us the pleasant shock of the familiar, while making us believe more fully in the show’s fictional characters, who seem to walk among real people.

Overuse this strategy, though, and it turns into just another cheap gimmick, and your show essentially becomes a game of “spot the historical reference!” Or worse, Forrest Gump.

So I started to get a little queasy when one character on Friday’s episode of The Knick mentioned that “Doctor Pepper’s brain tonic,” a quack medicine, was being dispensed at soda fountains—right on the heels of the health inspector suddenly coming up with the name “Typhoid Mary.” It was just one “There really should be a prize for good journalism, don’t you agree, Joe Pulitzer?” away from becoming a total name-dropping nightmare.

Or maybe that was the point, because it was really an episode that centered on questions of naming: the value of your good name, and what it mean to put that name on a discovery, a paper, a product, even another person.

The episode thus begins with Bertie amending his name to “Bertram” when he answers the phone, alert to the presence of his father, who thinks the nickname is demeaning. They’ve been woken up in the middle of the night—and man, it must be quite a hassle for Bertie to stick that fake beard on his face every time he emerges from his room. Maybe he sleeps in it?

On the phone is Doctor Thackery calling Bertie to come to the Knick. Still reeling from his failed placenta previa operation (the same difficult procedure that led to Doctor Christiansen’s suicide), Thackery has been awake for a cocaine-fueled three days, trying out a new experimental idea on two Chinese prostitutes. Let’s just say it involves blowing up a basketball somewhere very interesting.

And Bertie Chickering is very interested indeed. Bertie: you have somehow managed to convince all of these people that you went to med school, despite clearly being 12 years old. So pick your jaw up off the floor and try to at least pretend you’ve seen a naked woman before.

They put the word out to the other hospitals that they want any placenta previa patients, and when one comes in, they successfully save both mother and child. Cue applause from the theater, and Thackery announces the discovery of the “Christiensen-Thackery-Chickering” surgical technique.

He sends Bertie home to sleep, while he burns (injects) the midnight oil (more cocaine) writing up their findings. And so Thackery is still in the hospital when Doctor Edwards’ clinic patients start arriving, and he sneaks into the basement and blows his top at what he sees. The clinic, in his eyes, is immoral. Edwards tries to appeal to him as a man of science: black people aren’t biologically inferior, so why do they not deserve the same medical treatment as whites? But Thackery’s racism runs deeper than that.

That is, until he notices the vacuum cleaner sitting in the corner, which Edwards has modified to provide surgical suction. And suddenly Thackery is like a kid in a candy store, delighting in all of Edwards’ new surgical discoveries. Edwards offers him a deal: Thackery can publish Edwards’ findings under his own name, as long as Edwards can be a secondary author. And Thackery actually looks at Edwards for the first time, sticks out his hand, and finally officially welcomes him to the Knick.

He’s still a racist ass, of course, but I guess we’ll take what we can get.

Bertie takes what he can get with Nurse Elkins: they go on a date that involves walking around and around in circles in Washington Square Park and buying hot pretzels, not to eat but just so they’ll have something to do with their hands. They eventually sit on a bench just across from Doctor Thackery’s house and reminisce—Bertie about the time (earlier that day) Thackery told him he was a good doctor, and Lucy about the time when she saw the interior of that house, and then the interior of Thackery’s pajamas. This can’t really be called a love triangle, can it? Two people who are both secretly in love with the same person, who is basically in love with himself—what shape is that? A rhombus?

Barrow manages to find a used X-ray machine to buy, so he can pocket the difference out of Captain Robertson’s donation. And then they just start playing around with it, just firing off X-rays into people’s heads from this banged-up machine, and you know some kind of disaster has to be coming. That or the origin story of a superhero.

Meanwhile, the same salesman tries to convince Thackery to put his name on a liniment that claims to cure things like heart disease. Thackery is incensed that they’d even suggest putting his name on fake science and kicks the guy out.

The Gallingers’ baby succumbs to her meningitis and dies, and everyone is super sad, except Eleanor, who refuses to believe it and thinks the kid is going to get better. Sister Harriet kindly suggests that maybe they should adopt the orphaned girl in the hospital—you know, as a replacement. Barely know the difference.

Inspector Speight and Cornelia Robertson find the common denominator between the sick families—a cook named Mary Mallon, the aforenamed Typhoid Mary. They track her down to another rich household, where she, being a carrier and not sick herself, doesn’t believe them and runs for it. So Cornelia just up and tackles her.

She is still riding high when she gets home, but is quickly knocked down from her perch. First by her fiancé, who informs her that her accomplishment will be a great story for the tea parties she’ll be hosting after they get married. And then by her future father-in-law, who barges into her room when she is changing for bed and says a string of horrifyingly rapey things. Basically, that he gets to do whatever he wants with/to his future “daughter” or else her family will suddenly find themselves very poor.

Because every good thing that happens to anyone on this show is immediately met with three or four awful things. Mostly they do it to themselves: Fresh from being welcomed as an equal by his boss, Doctor Edwards gets himself into yet another street brawl, but now with a professional boxer who can actually hurt him, and does.

And Cleary and Sister Harriet continue to perform abortions and then have pointless conversations about whether they’re going to hell. Here’s a hint: You’re poor people/women/minorities in New York in 1900. You’re already there. 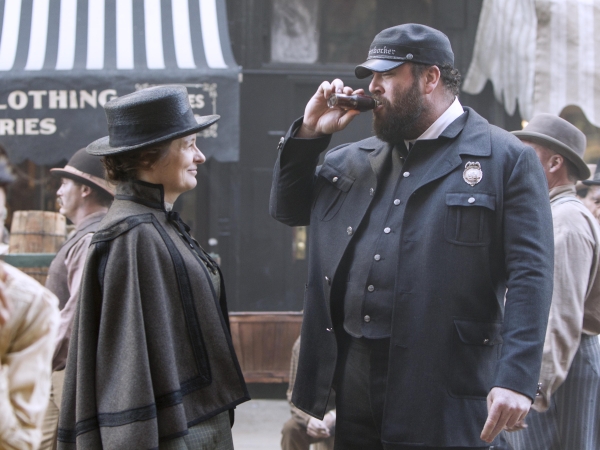 Filed Under: TV, TV, The Knick, Noam, The Recap