Much like Doctor Thackery and Nurse Elkins, after six weeks of teasing us, making us believe that some real action must be just around the corner, this week The Knick decided to just go for it.

I don’t know how I feel about this as an overall strategy for a television show—it made for some slow-moving episodes and generally odd pacing for most of the season—but it definitely made for an explosively satisfying hour.

The racial tensions that have been simmering for weeks are finally about to boil over. But first, lest we forget who the protagonist of this ensemble show is, we get two scenes starring Doctor Thackery, neither of which has anything to do with what comes after.

In a flashback, we see Thackery presenting his new discovery, a method for locating the appendix, to the applause of Doctor Christiensen and a gallery full of doctors. Both doctors are totally hopped up on their good friend cocaine.

Thackery is wakened from dreaming of this by one of his Chinese prostitutes—a patron of the opium den is choking. Thackery gives him an emergency tracheotomy and then goes off to the hospital.

Where he is just in time to treat the prostitute-procuring policeman from last episode, Phinny Sears. See, Officer Sears was plying his trade in the Tenderloin, somehow deciding that since a black woman was walking on the street, she must be a streetwalker. Well, her boyfriend doesn’t much like that, and he stabs Sears in the kidneys a few times for his trouble.

Sears’ family, along with half of the Irishmen and all the Irish cops (i.e. all the cops) in the Village, gather outside the hospital, while Thackery & co. try to save his life. Doctor Gallinger, just back from his bereavement leave, is shocked to see that in his absence, Doctor Edwards has graduated from shadowy basement-dweller to (his actual title all along) deputy chief of surgery—primarily on the strength of his invention of surgical suction, which is used to great success during the surgery. There isn’t much Gallinger can do about it except elbow Bertie and his dumb fake beard out of the way.

They patch Sears up, but he starts bleeding internally and dies, and so the already-riled-up mob outside just starts beating the shit out of random black people on the street. The pretense that they are trying to find the guy who actually killed Sears falls away in like 20 seconds. Thackery runs out of the hospital to stop (some of) them. Being that we have no reason to think he’s less racist than he was yesterday, it’s not clear why. Maybe as a doctor, he just hates to think of all those injuries?

Some of the injured come into the hospital, and Gallinger tries to kick them out, but Thackery realizes that sending them out into the streets would be a death sentence. So they segregate the ward instead. So Sears’ by-now-completely-drunk mother tells the crowd to storm the hospital to find (lynch) her son’s killer (anyone with dark skin).

So they do, while ambulance driver Cleary and his assistant Pouncey try to hold back the mob with baseball bats. The rioters storm through the hospital and smash up everything breakable they can find. The hospital staff and the black patients go and hide in Edwards’ basement clinic, which everyone but Thackery is completely shocked by. Gallinger and Barrow are disgusted; Bertie and Cornelia are impressed.

They realize they can’t stay there, so they split up. The mobile ones go with Sister Harriet to a nearby church, while she holds up her cross as if the rioters were vampires. Thackery orders a protesting Gallinger to go with. The rest they take to a black infirmary in Little Africa, some in Cleary’s ambulance, and some, including the uninjured Edwards, on gurneys covered by sheets. But the horses have been stolen by the mob, so the monstrously large Cleary pulls the ambulance himself.

The infirmary turns out to be run by an old college friend of Edwards’ (“He was the one in his class, I was the one in mine.”) and already full of victims of the riots. So Thackery, Edwards, Cornelia Robertson and Nurse Elkins stay and help treat the patients. At one point this involves cutting off a man’s arm with a hacksaw—Nurse Elkins goes a little green, but only for a second. They’re totally out of supplies, so Thackery dips into his own personal stash of coke to help anesthetize.

Clearly we are supposed to see Thackery transforming from a racist into not-so-much-of-a-racist before our eyes. But his decisions here are all in response to external events—and it seems rather out of character for the fundamentally analytical Thackery to change his mind about something for emotional and circumstantial, rather than logical, reasons. On the other hand, it gives him the opportunity to be the hero and tell everyone what to do. And we know there’s nothing Thackery loves more. Well, besides cocaine. And opium. And Chinese hookers.

Meanwhile back at the Knick, Barrow hears that prostitutes in the Tenderloin are being gang-raped while the cops are distracted downtown, so he rushes up there to make sure Junia is OK. She is, but she’s screwing another client, which is something Barrow definitely did not want to barge in on.

And Bertie is left to treat all the remaining (i.e. white) patients at the Knick on his own, at one point performing solo what looks to be Edwards’ new silver-thread hernia repair.

After it is all over, Cornelia takes Edwards back to his clinic, where they finally just start making out furiously. And Thackery walks Nurse Elkins home, and she brazenly invites him in. Before they do the deed, she asks if, being her first time, it will hurt, and he says “I will make it painless, and perfect.” A big claim, but of course he means “I will get your ladybits really numb with cocaine before I do you.”

In the morning, he’s gone and there are vials on the floor. As she combs her hair and gets ready for work, Lucy looks coked-over and horrified. But then she gets this huge, gleeful grin on her face, and sends us into the credits with the impression that she’s not regretting a thing. 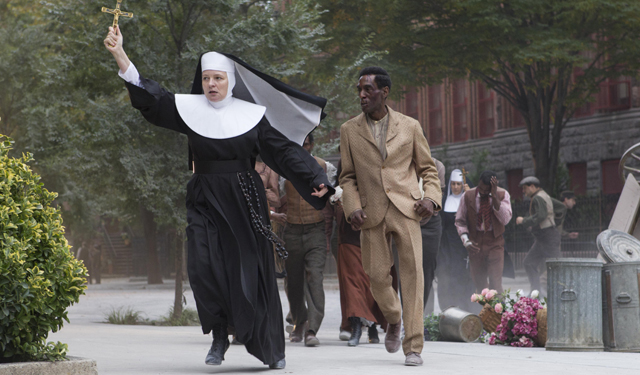