When artists faced the destruction of New York’s graffiti mecca, Long Island City’s 5 Pointz, last year, they sued the property owner under something called the Visual Artists Rights Act. They lost. In part, they lost because a judge ruled that while the artists had been permitted to decorate the space, they “knew that the buildings were coming down.” They therefore couldn’t have expected that their work would be permanent. But they also lost because—bottom line—the odds were against them.

Across the country, a growing body of legal decisions and local rulings are coming out against the artist, particularly in the case of public art. And when the artist loses, the works—some of them long-standing, beautiful or neighborhood favorites—are often removed immediately or destroyed.

The most famous case of recalled public art is, of course, Tilted Arc. Everyone had an opinion way back in 1986 when sculptor Richard Serra brought a lawsuit against the federal government’s General Services Administration for removing his Arc, a 120-foot-long steel sculpture that same agency had commissioned several years before for New York’s Federal Building Plaza. There were hearings and seminars, cries of censorship, as well as plenty of ink expended in published arguments one way or the other. In the end, Mr. Serra lost his case. But not because the federal district court judge decided he didn’t like Tilted Arc, but on the more straightforward fact that the contract the artist had signed with the GSA contained a clause permitting the federal agency to move the piece.

Much has been made of the state of public art in the United States as a result of the Tilted Arc controversy, but perhaps the most important lesson for artists to draw from the outcome is that “when you sign a contract, you’re bound by it,” according to John Henry Merryman, a legal expert in art law. Other cases have turned on the very definition of art, as set out  under the Visual Artists Rights Act, a 1990 amendment to the U.S. Copyright Law prohibiting alteration, mutilation and destruction of “a work of recognized stature.”

In a case that wound through the courts for seven years, sculptor Chapman Kelley brought a VARA lawsuit against the Chicago Park District after the city decided to create a new bridge in the Millennium Park  area in 2004. That bridge impacted a wildflower arrangement, consisting of 68,000 square feet of plants, which the artist had created in adjacent Grant park in 1984 using his own money and without authorization of the city.

Mr. Kelley won in district court but lost repeatedly in appellate court. The issue was, surprisingly, not whether or not Mr. Kelley had been paid or commissioned to create Wildflower Works, but rather the precise language of the law. VARA defines the type of artwork covered by the statute—paintings, drawings, prints, photographs or sculptures in a single copy or limited edition of 200 copies or fewer (that are signed and consecutively numbered)—and the courts would not stretch the meaning of sculpture to encompass floral arrangements. “[G]ardens are planted and cultivated, not authored,” the Court of Appeals for the Seventh Circuit decided in 2011.

In August 2006, in a case that artists of public art might want to become familiar with, the U.S. Court of Appeals ruled specifically that VARA “does not apply to site-specific art at all.” Leaving no gray area, the court affirmed that “the plain language” of the law “does not protect site-specific art.”

That ruling arose out of a lawsuit brought by a Boston sculptor against the private owner of a city park. The owner planned to rearrange the placement of 27 sculptures the artist had been commissioned to create for that park. The park owner sought to create an improved public walkway and increase the number of plants. The artist, David Phillips, claimed that his sculptural elements were “site-specific,” and that any changes to his placement of pieces amounted to its destruction. A district court sided with the artist. But two subsequent appellate rulings, in 2004 and 2006, reversed the earlier decision.

One obvious but crucial lesson that artists often need to learn is “get it in writing,” Elena M. Paul, former executive director of the Manhattan-based Volunteer Lawyers for the Arts, said. Artists may have understandings with their dealers or others—perhaps tacit or even stated, but rarely written down. When there is a dispute, however, both sides may claim very different understandings.

A second element to this, she noted, is that artists should read the agreements they sign: “Artists are handed a contract, and someone tells them what it means, or says that it is a standard industry contract. After there is a problem, the artists come to Volunteer Lawyers for the Arts, waving the contract and claiming that the dealer violated their agreement. We read over the contract and then have to tell the artists, ‘You didn’t sign what you thought you signed.’ ”

Some contracts, especially those in which an artist is commissioned to create a public mural or sculpture may need to be explicit about every possible contingency. Sculptor Howard Ben Tré, for instance, had never mentioned to the owner of a building in Baltimore, Maryland who commissioned a glass sculpture for the lobby in the early 1990s that cracks generally appear in his pieces but would not compromise the work’s structural long-term integrity. However, on seeing the eventual cracks, the building owner became upset, leading to an arbitration that forced Mr. Ben Tré to remove the work at his own expense and return the money he had been paid.

Another instance in which a provision in a contract might have precluded a legal action occurred three times with sculptor Athena Tacha. She has received numerous commissions for public art, but the contracts never contained a clause requiring the commissioning bodies to provide routine maintenance or make any needed repairs. Works at the University of South Florida in Fort Myers and at Hyde Park in Cincinnati were destoryed after they had been allowed to rust and become a hazard to the public. A third work, in Sarasota, Florida, was similarly permitted to deteriorate, but a letter from Ms. Tacha’s lawyer, Ann Garfinkle, brought a promise to repair the piece.

“Letting a work of art deteriorate to the point that the owner can declare it hazardous is a way to get around the provisions of the Visual Artists Rights Act,” Ms. Garfinkle said. Because “there is no duty to maintain artwork under [VARA], you have to negotiate for that in the contract.”

Still, “safety concerns” often trump all other matters on the municipal level. Earlier this year, Bay View, Wisconsin, resident David Schardt’s 30-foot-tall Polar Vortex ice sculpture, created in his own backyard, was chain-sawed into bits by the city’s Department of Neighborhood Services due to safety concerns that it could fall or collapse the ground under it.

“I just thought it’d be cool for people to see,” Mr. Schardt said. 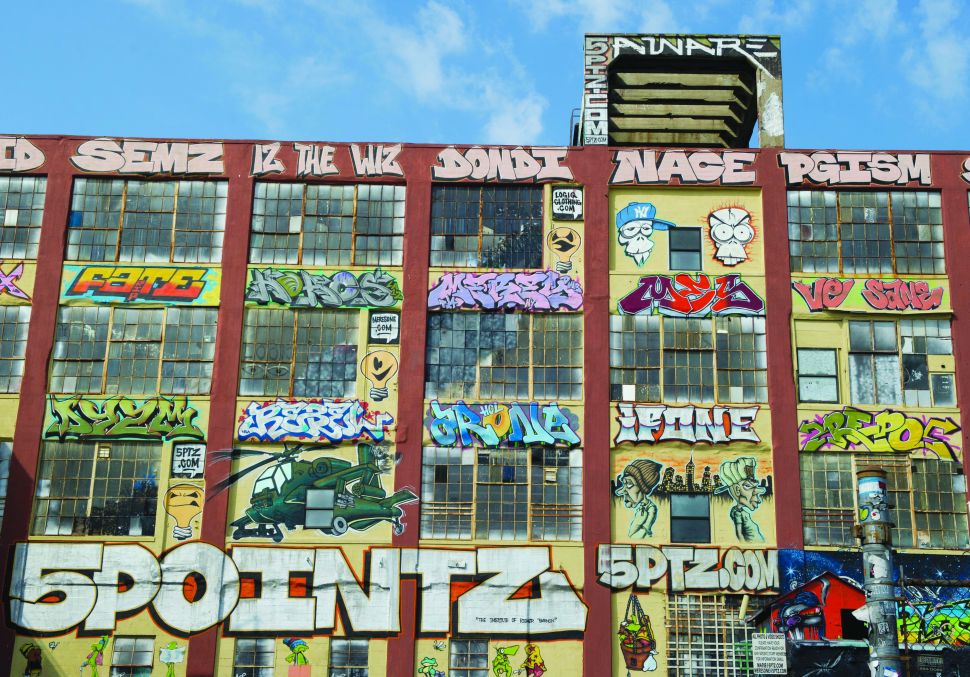