But seriously, The Mysteries of Laura is no good.

Still, like a small man traveling through dangers to throw a piece of jewlery into a volcano, I announced to the Observer office “I’ll do it! I’ll watch the shitty TV show.” And watch it I did. And if you don’t believe me about the quality, I took the time to spell out, moment by moment, every instance of casual racism, law-breaking, and other morally reprehensible actions done by the characters (and creators) of this show. This is going to be a long Fall.

1:37 – Right off the bat Laura (who we know is both dysfunctional and totally out there because there are Cheeto crumbs in her car) discharges her weapon at a criminal holding a hostage, in a park she had moments ago said was too crowded. Like, crowded with bystanders. Laura might be a bad cop, you guys.

4:00 – After being praised back at the station for her wanton disregard for human life, Laura gets a notice there’s a “911” at New Hall. Plot twist, her kids go to New Hall, and have covered a classroom in paint. This means that either A) A New Hall teacher actually called 911 on Pre-K students who got paint on the walls. Control your students. Or B) Laura blatantly misallocated department funds and time leaving work to admonish her kids. Laura is a bad cop, you guys.

7:15 – We meet Jake, who is Laura’s kind of husband that cheated on her, is no longer living with her and refuses to sign divorce papers that Laura obviously wants him to sign.” This doesn’t stop Jake from giving Laura a full-on, very against her will kiss on the lips before leaving. That is not okay in real life, Jake.

7:35 – Laura singing to Patti Smyth’s “The Warrior.” Man, she is one quirky yet tough lady cop.

8:01 – A rich woman, upon meeting Laura, says “a middle-aged police woman, just like on TV.” That was so meta I can’t even deal with it.

11:55 – So there’s a murder victim somewhere in this show, a rich guy who makes phones or something. More importantly, one of the suspects is his Spanish house maid named Margarita. Like actually named Margarita. I’ll let this kid handle that one.

12:08 – This show makes its third douche joke. Man, is Laura rough around the edges.

12:20: In like the span of a minute, Laura feeds her two sons pizza for breakfast and reveals to their principal that they can’t read a single letter. Laura is not a great mother.

16:08 – “With all the racial stereotypes I wonder when a gay stereotype will show,” I think to myself literally as this man appears on the screen.

17:17 – Laura mentions Target for the second time this episode, and actually says the phrase “you’d be surprised at the selection.” So, thanks Target, for this show’s existence.

17:26 – Undercover at a pool party, Laura has to get into a bikini because Debra Messing has a “I’m still kind of hot” clause in her contract. Also, Jason Derulo is playing which is offensive in its own way.

18:31 – The brother of a murder victim sells a phone he stole from that murder victim. The exchange happens at a crowded party inside a room with glass walls. That guy is a bad criminal, you guys.

30:00 – Wait did Laura force feed her kids so much cough syrup that they are vomiting? Yes to both questions, by the way.

36:11 to 38:12 – Laura solves this week’s particular mystery (of Laura). First off, she reveals her findings at the murder victim’s funeral which, like, couldn’t wait? Also turns out, her boss is the murderer. You know, the guy with the dead wife. Long story short, Laura’s miraculous discovering banked too hard on multiple people, including herself, looking way too closely at other people’s wedding rings. That image, along with the moment he tries to shoot her seconds later, along with the fact that he was the murderer in the first place, was in THE COMMERCIAL FOR THE SHOW. For a show with the word mysteries in the title, I suggest refraining from putting the answer to the mystery in your ads going forward. 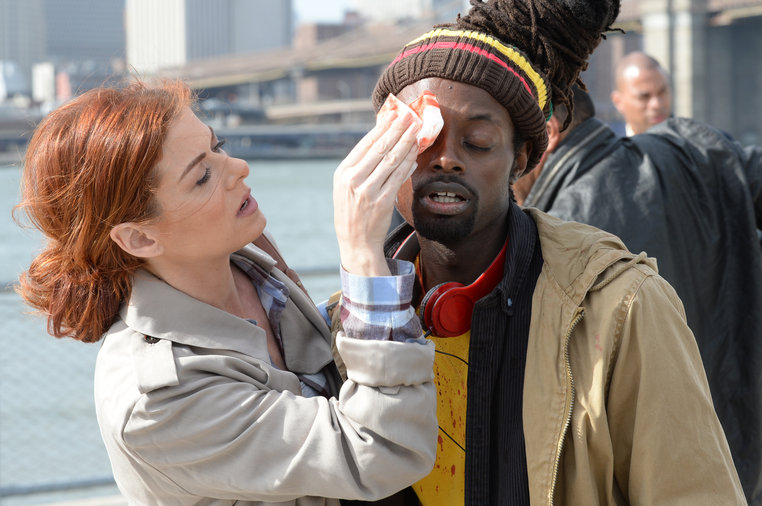