The Louise Lawler billboard that just went up on 10th Avenue and West 18th sends a mixed message. It’s a photograph of a Donald Judd, a Sol LeWitt and a Frank Stella, museum-weight Minimalist masters. So it channels the new seriousness that cloaked the opening of the art season this year, the sense that Andy’s invitation this time around somehow got lost in the mail. But the billboard is also a High Line Art installation. Dealer Stefan Stux, a recent departure for the rebounding Upper East Side gallery scene, calls the High Line the “Trojan horse,” meaning it was the kick-starter of the property spiral now strangling the West Chelsea art world. So this season is about serious stuff but it’s also about real estate. And, since the Judd, LeWitt and Stella were all for sale at Sotheby’s, about the art market, too. The billboard hanging over Chelsea references all.

As to the serioso mood, you can pick it up both in presences … and absences. At the opening of the new David Lewis Gallery at 88 Eldridge I was struck by Gillian Jagger’s Track in Central Park, a tire track cast in plaster and resin. It was at once Minimalist and expressive but, being from the early ’70s, hot off the production line (like much art today) it wasn’t. The Tomb series by Iranian-born sculptor Siah Armajani was a knockout at Alexander Gray. Roxy Paine’s elaborate wood sculptures at Marianne Boesky were almost exhausting in his verisimilitude (though his carving of a bullhorn mated with a chainsaw struck a welcome low note).

What’s missing? I didn’t see too many Haute Décor abstractionists jockeying for a place at the adult’s table. Nor too many sculptures aggressively sized so they can only fit in a private museum. The new gravitas is all about caution. (Maybe there’s even some disgust, too, at the hype, the fakery, the museum-building hubris.) Lots of folks think there’s a bubble and if there is a bubble, history shows that fads will be fickle, quality will last. Unless the new gravitas is itself just another fickle fad, of course.

As I wandered galleries, conversations would inch toward real estate like iron filings towards a magnet. A gallerina at one posh Chelsea gallery was overheard calling out to the dealer that a woman on the telephone was again asking if they had the building’s air rights sewn up. (A sale in the works?) The dinner for Rachel Lee Hovnanian’s show, “Plastic Perfect,” at the Leila Heller Gallery on 25th (one scary installation was all about the genetic manipulation of babies. And you could pick them up!), was held in the cadaver of the Betty Cuningham Gallery just down the street.

In Brooklyn, the subject was equally inescapable. At Pierogi on N. 9th Street, for a preview of a show to celebrate their 20th anniversary, real estate was thrust in your face. Scaffolding was about to be erected outside and a leaflet read: “This is ART—Don’t panic! …. There is NO condo tower being built on N. 9th Street. This is a conceptual art project.”

Conceptual artists usually like to maintain the structure of reality in their fables but such is hyper-sensitivity on this issue that the leaflet ends: “The artist, Andrew Ohanesian, felt it was important to let the community know that this project is a critique on the gentrification and tower building in the area and not a contributor. Please do not be alarmed.”

The Pierogi show was sizeable. O.K., huge! A few hundred artists, though most of the works were modest in scale. “It’s kind of shocking to see everything up,” Joe Amrhein of Pierogi said. “Some people have passed away. Some have changed their lives. For us, it’s 20 years of memories. Friends, relationships. Good times, bad times. Back then Soho was falling apart, Chelsea was developing, Williamsburg just came out of the woodwork.” Well, it’s out of the woodwork now and developers are moving in there, too. Hence the faux condo tower.

Brooklyn openings included several in the Bogart art building and one at Microscope Gallery. Afterwards I sat outside Heavy Wood, a local boite, with a few friends. Artists joined us. Marni Kotak. Gallerists too, like Elle Burchill, a director of Microscope, who swiftly adopted a not particularly feral street cat.

“I can’t see this happening in Manhattan,” I said, of the impromptu gathering of artists and dealers. “We’ll see how much longer it happens here,” Ms. Burchill said, not hopefully.

Here and there one sees signs of a populist rethinking. On the second floor of 515 West 26th Street, a space made its presence felt when the elevator doors opened onto a wall of sound and dancers. Steven Kasher has been a dealer in photographs for 20 years. Andi Potamkin has been running a tony local hair salon with her fiancée. It had an art program. Ms. Potamkin met Mr. Kasher when she came into his former space on 23rd Street looking for a show. They lit upon art photographer Phyllis Galembo. It had progressed from there: Kasher Potamkin. “We are trying something new and experimental,” Mr. Kasher says. Their space will combine the functions of an art dealership and a high-end boutique.

This makes it very much a part of the ongoing cultural melt in the art world now, in which previously distinct categories—artist, dealer, curator, critic, writer, advisor, marketer, muse—are becoming hyphenates and most are trying on an entrepreneur’s hat for size, too. This is not totally new; the avant-garde was there first, of course, that being their job description, with Duchamp functioning as a dealer and Dalí always handy at marketing. But what was formally individual and distinctive has, in our age of Internet and Instagram, become a business model. And so it is with Kasher Potamkin.

“We have two galleries, complementary but separate. There’s a lot of osmosis. I’m continuing to work with great photographers. But I’ve always wanted to do a store gallery,” said Mr. Kasher.

Ms. Potamkin concurred. “I want a store-like atmosphere,” she said. “Where somebody comes up and says ‘Can I help you?’”

Now that’s radical! The legendary iciness of galleries to those daring to tread within comes to mind. Indeed the Times recently ran a piece tut-tutting this phenomenon but Potamkin believes that these protocols are a matter of policy.

“They want people to go in and it feels like a museum,” she said. “I felt there was a void to be filled. It’s cash and carry! If somebody comes in and likes something and buys it they can take it away.”

Even if it’s a group show?

So to the Lower East Side. Walking up Rivington from an opening at On Stellar Rays Gallery I noticed that there was something going on in the former Dodge Gallery. Wandered in. It was the Betty Cuningham Gallery. You’re re-opening, I noted. Stating the obvious.

“Yes. And happily,” Ms. Cuningham said. She pulled out an iPad to show me pictures of the gallery she had opened decades ago in 1972, way before Soho had happened. It had been above Fanelli’s on Prince. It’s back to the old neighborhoods. Steven Sacks, owner and director of Bitforms, was in his snowy white space across on Allen Street. He moved in after 13 years in Chelsea a few weeks ago and opens with a R. Luke DuBois show (artist hypen self-taught computer programmer) on September 14.

And so the art world turns. There’s a growing uneasy feeling that we have been moving speedily into an art world that ever more pugnaciously reflects the 99-to-1 global wealth gap, a winner-take-all economy that loves huge short-term speculator gains and contemplates the long-term health and productivity of the art-producing culture with the distinct ho-hum with which most of the world contemplates planetary warming.

So to the 1 percent. It’s a bit of a hike from Pierogi, Bushwick and the LES to the grandees on Manhattan’s Upper East Side. There were openings in both the Galerie Perrotin and Dominique Levy, who share 909 Madison, formerly a bank. Perrotin was showing Float by Farhad Moshiri, an Iranian artist, and following with a private dinner at Monkey Bar. Mr. Levy’s artist was Roman Opalka, a Pole. In 1965, Opalka had painted the number one on an upper lefthand corner of a canvas in his Warsaw studio, and plunged on, aiming to continue until infinity. He had reached 5-million-plus when he died in Italy in 2011.

“He is a conceptual artist. But he is also a true painter,” Ms. Levy told a mini-throng before a lunch. She said she felt “passionate” about Opalka’s work. “We are incredibly lucky it’s here. I think this is the most important exhibition we have so far done. And the most important we will do.”

Afterward, I told her that this was the first time I had heard a dealer talk of an artist like this. And that I had found it quite moving. “That is why we are all here,” I said.

At lunch I told a few people of this exchange.
“Even flippers?” somebody said sourly. “That is why they are here?”

I didn’t respond. But I’d like to think, yes, flippers, too. 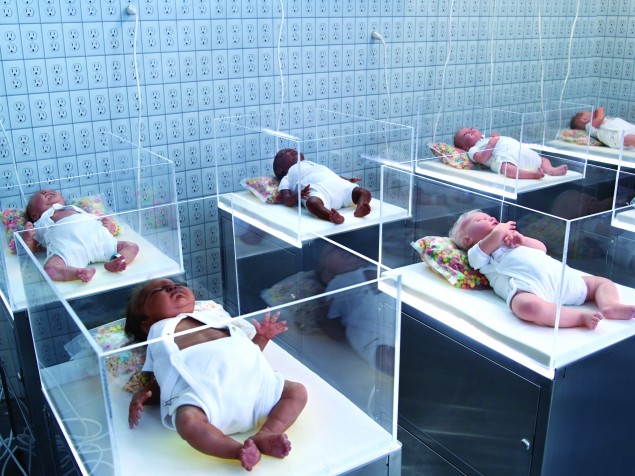