Here’s the good news: as Annalise Keating, Viola Davis has created a character infinitely more intimidating, hyper-competent and willing to bend the rules on behalf of her clients than her obvious analog Olivia Pope. Here’s the bad news: she’s surrounded by a bunch of snot-nosed kids all the time.

It makes sense that in a drama about an extraordinary law professor, a large chunk of the main cast is going to be made up of her students. And a recurring, hilarious theme of the pilot is how much she does not care about their crap — at any given time as she strides purposefully from classroom to courtroom she seems to be a split second from literally shoving students out of her way. But why are we asked to put up with so much of it? The pilot introduces several mysteries, including a murder plot three months into the future involving most of the law students with speaking parts, and the only disappointing thing about any of the stories outlined for the season is how little they directly involve Keating in this first hour.

Let’s just focus on her her for a sec: Annalise Keating is the kind of teacher who snarls “NEVER take a learning opportunity away from another student” when someone dares to volunteer a correct answer out of turn, who runs a law firm out of her own beautiful, stained glass window-having house while shamelessly using her first year law students as a combination think tank and unpaid intern labor force, who cheats on her handsome professor husband with an EVEN MORE HANDSOME police detective who she later puts on the stand and essentially dares to admit to their affair in service of winning a case. Viola Davis plays her as someone vibrating with such energy and power that almost everyone who shares a frame with her seems to regard her with a mixture of fear and awe typically reserved for deities. I love this character! I don’t know why I found myself longing for more of her in the pilot when she’s the lead of the show, for crying out loud.

Unfortunately, the pilot spent a great deal of time on the flash forward post-murder panic of Keating’s star students, one of whom, Wesley Gibbins, has graduated from Hogwarts and come to law school to serve as the audience surrogate, swiveling his beautiful, perplexed face around on his periscope-like neck at all the nonsense surrounding him like a bird who has wandered too far from his flock and can’t figure out how to get home. How he’ll go from being treated with dismissive disdain by his classmates to being complicit in a murder with them in three months still isn’t super clear, but whatever! He seems nice.

The other students are kind of a featureless collection of Cutthroat Law School stereotypes: the uber Type A girl, the handsome smarmy guy who’s willing to trade on his sexuality to get ahead, the marble-mouthed girl who seems deeply confused about where she is (at one point she lectures one of Keating’s associates on having the gall to defend a guilty person, like, PRETTY SURE THAT’S WHAT THE BULK OF CRIMINAL LAW IS ABOUT) and the guy who wears ascots, played by Matt McGorry of Orange Is The New Black fame. But they all suck! They are characterized, in a kind of amorphous collective blob of traits, by their ambition, flexible moral compasses, told-not-shown intelligence and desire to be Annalise Keating. Join the club, but that doesn’t mean I want to watch them more than I want to watch her.

Wes’s likability elevates him above the rest of his cohort, which is fortunate because he’s directly involved in the main murder mystery and neighbors with a mysterious girl who may also be involved in a separate murder mystery, which may also involve Annalise Keating’s husband and various other people at this super murder-happy university. Oh, and did I mention that Keating’s husband is the dead guy the law students are trying to dispose of? Props to the show for that one, because I spent the episode certain that Matt McGorry was the dead guy due to his rather conspicuous absence in the flash forwards.

To its credit, the pilot manages to cram a case of the week, a sequence of events that leads Wesley and the other star students to get jobs with Keating’s firm, a creepy associate at her firm with a taste for mouth marbles, Paris Geller as a non-creepy associate (SO FAR), infertility issues, Keating’s rules for successful defense lawyering (1. Discredit witnesses. 2. Offer a new suspect. 3. Bury the evidence), adultery, a possible psychotic break, a case of the week and two murder mysteries into one hour of television. The breakneck speed is both impressive and exciting, and feels a bit like Scandal did a few seasons in, when the series doubled down on the turned up storytelling that has made it famous. If the show is this wild straight out the gate I can’t imagine where they’ll go over the course of the season (Illuminati plot????) But I swear to the gods and goddesses of television, if the number of scenes Viola Davis gets in any given episode is ever equivalent to her lame students’ again, I’ll be…well, mildly bummed, and I’ll absolutely keep watching. But you’ve been warned! 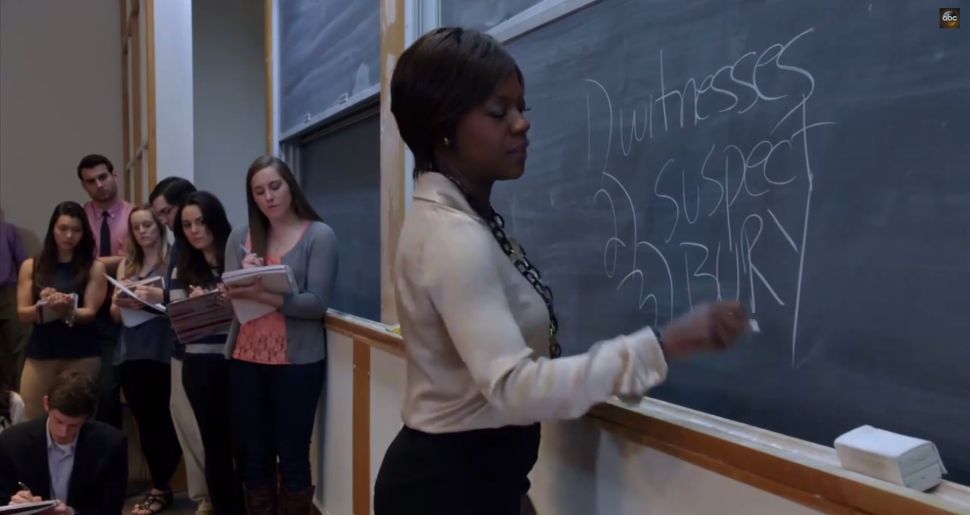 Filed Under: TV, Shondaland, How to Get Away With Murder, recaps, TV