I can’t imagine any film starring Jane Fonda to be a total loss, but This Is Where I Leave You, a vulgar, inept and gruesomely contrived load of junk misleadingly labeled a comedy comes perilously close. I know she wants to fuel her acting career by making as many films as time permits, but this is a deadly waste of her considerable talent that should have been sent special delivery to the morgue where dead scripts go.

If there’s anything left out there in the land of Porsches and plastic palm trees of the kind of witty, wonderfully sophisticated comedies they used to make when Preston Sturges, Billy Wilder and George Cukor were alive, I haven’t seen much evidence of it in the trashy dreck they’ve been turning out lately. This Is Where I Leave You is no improvement. Helmed by the no-talent director Shawn Levy, perpetrator of the broadly unfunny Night at the Museum hashtags, this one fritters away Ms. Fonda as the matriarch of the Altmans, another contrived dysfunctional family (yawn) summoned to sit shiva after the Jewish family patriarch drops dead.

She’s as Jewish as Betty Crocker, but it’s a good excuse to strong-arm her four reluctant, agnostic, half-Jewish children nearing middle age into a superficial family reunion for seven miserable days of house arrest. Jason Bateman, who makes a career out of hiding his abilities as an actor of range and charm under a dumpster of trash, plays the nice-guy radio producer whose adulterous wife is divorcing him. Tina Fey is the married neurotic with a career-obsessed husband who spends her life mourning the loss of her lover, a next-door neighbor (Timothy Olyphant) with brain damage. Corey Stoll is the married brother whose desperate wife drags him to bed to make a baby every time the thermometer says go. Adam Driver is the mentally challenged child son who shows up at the funeral with a sexpot twice his age (Connie Britton) and makes everyone entertain thoughts of fratricide. Rose Byrne plays the high school sweetheart Mr. Bateman’s character should have married years ago, now an ice skater. As the glamorous, flighty, well-preserved mother, Ms. Fonda looks younger and more radiant than all of them put together. All of them hate each other, and from their obnoxious yelling and arguing and punching, there’s no reason why anyone in the audience should care what happens to them, either.

Among the many labored attempts to wake the audience up by padding a five-minute script outline into a no-win feature just under two hours, the three brothers go to temple, smoke grass and set off the fire alarm. Ms. Fonda’s matriarch shocks everyone in sight with a long, unsavory sequence describing the length, width and circumference of her dead husband’s penis and what he did to her with it. But nothing quite equals the borderline hysteria when she announces she’s turned into a happy, dedicated lesbian.

The novice script, by novelist Jonathan Tropper, provokes occasional flashes of snarky humor, but not enough to sustain focus when no conflict exists. The actors all seem lost and jittery. The direction seems phoned in while waiting in line at some suburban ATM machine. If you crave freshness, originality or quality, cherish the decision to pass up This Is Where I Leave You and be content with the knowledge that you didn’t miss a thing. 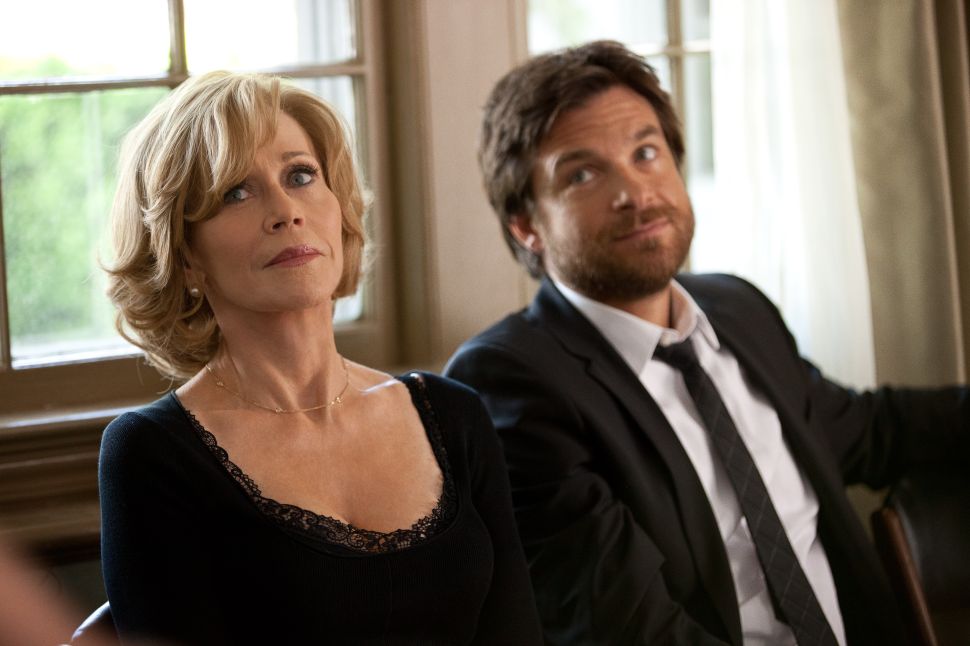 Filed Under: Movies, Reviews, movies, Jane Fonda, Jason Bateman, this is where i leave you