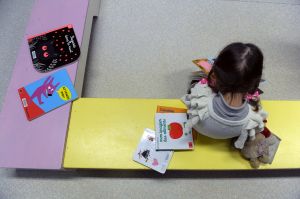 TO GO WITH AFP STORY BY GUY CLAVEL
A two-year-old child looks at a book at a kindergarten in Firmi, central southern France, on January 14, 2013. French government is expected to announce in the coming days schooling for toddlers (children less than three years).
AFP PHOTO / ERIC CABANIS
RESTRICTED TO EDITORIAL USE – TO ILLUSTRATE THE EVENT AS SPECIFIED IN THE CAPTION (Photo credit should read ERIC CABANIS/AFP/Getty Images)