The 14 pioneers have survived their first week in Utopia. At home, we have also survived their first week in Utopia. They have laughed. They have cried. Love has blossomed. Class wars have been fought. In the barn, general contractor Josh has successfully wired working electricity. In the garden, survivalist prepper Bella has successfully (?) completed preparations for her chicken tractor. In the field, hillbilly Red and ex-convict Dave are running their own secessionist state. It is a dream society, if the society you dream of is just like actual society, but worse, and without toilets.

Perhaps, though, it is too peaceful in Utopia: it is time, host Dan Piraro tells us, to introduce a 15th Utopian. Or rather, two potential 15th Utopians, who will duke it out to for the honor of spending the next year of their lives on a reality television show. Candidate #1 is Kristen, a young entrepreneur. Candidate #2 is Rhonda, a not-young Tea Party organizer. After three days, the founding Utopians will make their choice, just as the pilgrims did before them. Kristen tells the pioneers that she has a “very hungry personality.” She is motivated, she informs them, and driven. “I’m passionate about what I do, I’m a entrepreneur, a business lady, a money maker, I’m an optimist, I’m a happy person, I’m here to be positive,” she says. Also, she is here to make money, because she is an entrepreneur, and a business lady. “To survive, we all need to have money. I’m here to make you guys money.” Rhonda, for her part, has brought silverware, dish soap, and hot sauce. “I’m so glad both of y’all are here,” chirps Bella.

Given that the founding fathers of the secessionist Utopia State of Freedom will be reaping the benefits of neither Kristen’s entrepreneurial spirit nor Rhonda’s hot sauce, Dave and Red are left to plot their own national money making schemes. “We should think about a good business idea first!” Dave screams, helpfully. In response, Red says something incomprehensible. The incomprehensible thing will make five grand, easily, he says. For personal reasons, I would like to know what the incomprehensible thing is, but I do not. As I continue to attempt to parse Red’s apparent business plan, the Utopians head to the lake for a swim, where veterinary aide Bri and musician-slash-chili-farmer Chris — Bris, if you will (and they will) — cuddle and Bella ogles Josh, who is wearing a tiny blue Speedo. “I just want to pinch his little butt,” Bella coos, as Josh vamps under a waterfall.

Bri, who, ever since meeting Chris a week ago, knows a thing or two about being in love herself, is encouraging of Bella’s fledgling non-relationship. “You have the same sense of humor and the same personality,” she tells Bella. And the chemistry! Who can deny the chemistry! Bri is saying all the right things. Bella glows. Alternately, Bella is sunburned.

Across Utopia, Rob and Josh also discuss the situation. “Can you imagine dating her?” Josh asks. “Can you imagine coming home from work — ‘Oh honey, the compost goes over here.'” Rob cannot imagine that. The men laugh, ruggedly. It is a nightmare. Overhearing this conversation justifies every insecurity that I have ever had.

Rhonda, however, has no such insecurities. Rhonda has never had such insecurities, or any insecurities. “When people first meet me,” she bellows proudly to the group, “they don’t like me.” I can imagine that this is true. Kristen, meanwhile, informs the group that she is a fiscal conservative, because of business. Before she can tell us what that specific business might be, though, the plumbing arrives. “I want that toilet!” Aaron shouts, bounding to the gate. Like the electricity, the plumbing will be Josh’s project. Most things in Utopia, so far, appear to be Josh’s project, with the possible exception of the chicken tractor. But the toilet has cost money, which upsets Manhattan lawyer and neon aficionado Mike, who explains his concerns to polyamorous Dedeker. “Yeah,” Dedeker says. “Do you want to go for a swim later?” asks Mike. “Yeah,” Dedeker says. This is how romance begins.

In the barn, the pioneers are helping Aaron sort a new grocery delivery when there is trouble. Apparently, Amanda, who is pregnant, borrowed six bananas from USF’s private rations. When the Utopians’ grocery order came, she was to repay her six-banana loan. But the new grocery order contains only four bananas. Four small bananas, Dave points out. Dave loses it. Dave is in a rage: Amanda has not kept her word, and now Dave has no bananas. The banana shortage is the last straw: “If I don’t leave, I’m going to go to jail,” says Dave, packing his crate. Dave has packed his crate before. Is he bluffing? This time, Dave is not bluffing. The gate closes behind him. The Utopian State of Freedom is dead. “I just hate failure, man,” Red says, holding back tears.

The rest of the Utopians appear to be significantly less bothered by failure, because they are now in the middle of an impromptu dance party. It is not a party to celebrate Dave’s departure; it is a party that happens to coincide with Dave being gone. Yoga teacher and medical professional Dr. Nikki does a shoulder-stand. Mike plays the melodica. Chris plays the guitar; Bri holds Chris playing the guitar. Dedeker wiggles. Libertarian Rob dances with a lamp. “It’s like the Wizard of Oz, if the witch dies,” muses Mike. But Mike, tell us how you really feel.

Outside in the lake, Red rows moodily in a never-before-seen row boat.

As dawn breaks over Utopia, we see prospective Utopian Kristen milking the cow, who is miraculously still alive, and Rhonda attempting to help Bella in the garden. It is difficult to help Bella in the garden, however, because Bella is crazy. Mike and Dedeker, in the throes of passion, convert the now-prominent row boat into a “yacht” and set off on a romantic adventure to the middle of the very small lake. “You’re a great person,” Mike tells her. “If I met you today, if I met you 20 years from now, I would like you.” “Your hair’s beautiful,” Dedeker tells Mike.

Back on the mainland, the pioneers are receiving another delivery. All that happens in Utopia now is deliveries. This time, the pioneers are getting a stove and a fridge, as well as a letter. “Let’s hope it’s not a bill!” Amanda says. It is not a bill. It is instead a heartfelt letter from Dave. He is sorry. If he could take it all back, he would take it all back. He wants to be a better man. It is a good letter. “If you cannot find it in your hearts to let me into the family again,” he writes, “at least allow me to be baptized this Sunday.” This pleases Pastor Jonathan, who has abandoned his family for this very purpose. It’s all happening! Unfortunately, it is not all happening for Dave, and though the pioneers decide that he can indeed return to be baptized on Sunday, he will not be invited to rejoin the society. It is the most unanimous decision the Utopians have made thus far.

Baptism day arrives, and Josh kicks it off by unveiling now only a working indoor toilet, but also a faucet/shower contraption and a working spigot. I feel bad for Dave: It is a shame, to get kicked out of a society on the same day that society gets a working toilet. The bell rings, interrupting Red’s target practice. “Time for baptism!” he yelps. And it is. Dave begins with an apology for his negative energy; if the pioneers will have him, he would like to come back. The pioneers will not have him. Dave is understanding about this. It may be his last day in Utopia, he tells the group, but it is his first day with Christ. Pastor Jonathan reads some verses. Huntress Hex cries. This must be awkward for Kristen and Rhonda.

Sensing that now would be a good time for a petty fight, Mike suggests that Utopians get a microwave. Bella informs him that they cannot get a microwave, because of cancer. “That’s really toxic,” she warns. Mike would like to have a discussion about this, Mike says. “We’ll devote like, an hour to it. I think it’s a really interesting topic. I’d like to learn more about it.” Bella stalks off, presumably to her chickens. Bella’s chickens understand her. Bella’s chickens also worry about cancer.

Meanwhile, we are told, both Kristen and Rhonda have realized “how valuable this opportunity could be” and are given one last chance to plead their case to the group. Rhonda goes first. They are all leaders who want to change the world, she says. They should choose her, because she, too, is a leader; she, too, wants to change the world. Rhonda tears up. Kristen repeats that she can help them make money, because she is an entrepreneur. “Someone’s gotta leave today,” reiterates Rob. The Utopians like Rhonda because she worked harder, but they admire Kristen’s business sense. What business and what sense remains unclear.

Next week: the Newtopian will be announced! Also next week, Pastor Jonathan is going to get injured, and a pioneer named Taylor is going to arrive. Based on his introductory video, in which he hacks at a stump shirtlessly, Taylor is either a male model, a lumber jack, or an ax murderer.

I check in with the live stream. The live stream has started showing GAP ads with alarming frequency. On screen, Rob confesses that if he won the lottery, his dream would be to start a pug rescue. He is wistful. “I just want to take care of dogs,” he says. Me too, Rob. Me too. 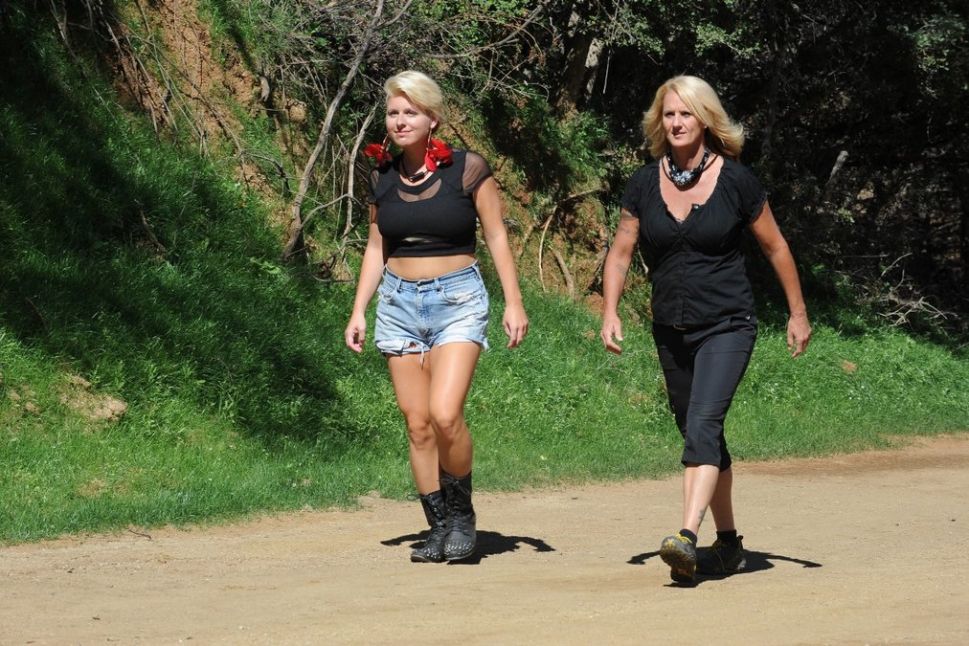