Ernesto is the new member of the Utopian family. (‘Utopia’)

The sun has yet to rise over Utopia, and already, Red is preparing to hunt. Food is running low. The pioneers need him to succeed. They are hungry, the pioneers. Also, they have so far managed to earn a grand total of $40 through “UtopiYOGA.” It is possible that the Utopians will have to generate a business idea that is not teaching yoga to one person in extreme heat. And the heat is extreme: it is more than 100 degrees in Utopia, which is almost as hot as the budding chemistry between huntress Hex and landscaper and human brick Taylor.

Since everyone is sweltering and miserable, it is a perfect time for the Utopians to decide upon a system of governance. Libertarian and proud New Jersey resident Rob kicks things off. “I wanna be the speaker!” he says, proposing the little-known governmental structure where people bring their problems and suggestions to Rob, and Rob will bring them to the group. Pregnant Amanda boldly suggests a democratic republic, with a small body of elected representatives. Hex advocates for anarchism. Bella thinks it would “be fun” to take turns by gender. Bri suggests a dictatorship. “Let’s just see how long it would take for them to get overthrown!” she says. “Or the dictatorship might work, and we could be like Hitler, and like, I dunno. I just wanna see how that would work out.” This does not get the reaction I hope it will.

Dedeker, known so far both for being polyamorous and also for being uniquely coherent, says that these are all terrible ideas — true — but they should pick one of them anyway, because it would be “a risk” and “crazy.” To pick which crazy risk to take, they all write down their proposals and draw the slips from a pot. Anarchy it is!
To celebrate, Red, who has strategically managed to avoid this discussion to “go hunting” returns to the compound, a dead deer slung over his ropy shoulders. He howls: it is the sound of victory. Soon, there will be venison for everyone! Or at least, there will be venison for some people. For Bella, there will be no venison. Bella, a vegetarian, is crying into the lake. “I just need to go make sure it’s dead,” Bella says. “Sometimes they’re not.” In this case, however, it is. “The little guy’s already crossed over,” she tells no one. “It’s just his body now.”
Across the field, Taylor and Hex (Tex?) snuggle in the grass, like teenagers in the opening shot of a cautionary tale about teen pregnancy, before anything bad has happened. On cue, something bad happens: Taylor calls Hex “Helen.” The problem is that Hex’s name is not Helen — it is Hex. “What’s my name?” Hex asks Taylor. Taylor stares blankly. “I’m waiting for it,” he says. He waits. We wait. The name does not come.
But Hex’s/Helen’s spirit cannot be broken, and she rejoins the group for a lesson in hillbilly wine-making with Red. Hillbilly wine involves fermenting raisins in a glass jug covered by condom. This is surprisingly difficult, and the condom keeps breaking, which distresses Bri, who is concerned Chris might run out of condoms. She really likes that kind, she says, mournfully. Luckily, Josh has stronger, thicker condoms, and both the wine and Bri’s sex life are saved. “Alcohol on three!” screams amateur camp counselor Hex.

Renewed by the promise of future booze, Hex attempts to resume her budding romance by discussing government with Taylor. “This is a very functional group of people,” she tells him, optimistically. “I read a newspaper once a year,” Taylor responds. Government, he says, is his “weakness,” second only to remembering Hex’s name. Hex presses on, asking Taylor if he sees Utopia as a democracy, maybe as more of a dictatorship. “I have no clue what any of those mean,” Taylor informs her. “I just don’t understand it and never really tried.” Hex excuses herself. “Are we gonna cuddle tonight?” Taylor asks, hopefully. It isn’t easy, being Hex. Then again, apparently it isn’t easy being Taylor, either.

Being Josh, however, seems like an absolute pleasure. Being Josh means that one morning, you wake up and put on your short-shorts — shorty-shorts, if you are Josh — and you declare it is “shorty-shorts Sunday.” “You gotta get your Dukes, on Bro,” he advises Rob and Mike. In the garden, Josh completes his morning stretches in his shorty-shorts. “I just gotta be careful,” he says. “I don’t want my dingle-dangle to fall out.” Always helpful, Bella tells Josh that she will keep an eye on his “dingle-dangle” for him. Josh and I are both sure that she will.
By now, temperatures have reached 106 degrees, and it seems that Bris cannot take the heat. Bri drops her breakfast, and leaves Chris to clean it up. In Bri’s mind, this makes sense, because “I accidentally dropped it.” Chris disagrees, suggesting that even if you drop your breakfast accidentally, you should still clean it up. The situation escalates. “Don’t insult me in my own barn!” Bri screams. It is nice to see Bri taking ownership of something, even if it is the communal property. Hex gathers the group to remind them that anarchy is about abiding by the human moral code. “Anarchy on three!” yelps Hex.

For Chef Aaron and entrepreneur-at-large Kristen, “anarchy on three!” means “order $500 of trashy groceries without telling anyone.” Cool.

With his bulk order of Sour Patch Kids en route, Aaron prepares to teach his first-ever Utopian “boot camp;” Like UtopiYOGA, it is $40. Also like UtopiYOGA, it attracts a single customer. Arguably, this could be seen as evidence that the pioneers should consider non-exercise-based business proposals, such as literally anything else. In the meantime, Rob suggests they should start selling water at their workout classes. Bella disagrees, citing bottled water as “unhealthy.” Hex points out that the issue is currently moot, because they have only had two customers ever. Bella, feeling trivialized, retreats to the garden, and eventually model anarchist Hex apologizes. “I love you,” Bella tells Hex. The pizza is here, Aaron tells everyone.

While unofficial treasurer Mike remains unconvinced that $500 of pizza and sour patch kids was a wise purchase (“You can’t spend $500! It’s like living with a bunch of fucking babies!”), the luxury rations do seem to boost general pioneer moral, and — bolstered by food and also the desire to have sexual intercourse — Chris decides to “make up” with Bri. It is Chris’s birthday, after all. Chris is not supposed to suffer on his birthday.
As Bri and Chris cultivate their libidos in the barn, Bella and Taylor cultivate aloe plants in the garden. Bella assures Taylor that, though she finds him very attractive and is currently stroking him, he does not “have to worry” about her, because she is “harmless.” “You can relax, you’re so cute, hahaha,” Bella assures, nervously, before reiterating that she is not a sexual predator.

While Bella tries to refrain from mounting Taylor, pizza partners Kristen and Aaron discuss all the ways in which Josh is racist, including but not limited to that one time he told Kristen she “went back to the dark side” by befriending Aaron. Amanda, still pregnant, is confused: “Are you saying he’s racist?” she asks. That is indeed what they are suggesting.

Having caught wind of the fact that Kristen thinks he is racist, Josh approaches her to clarify exactly how not-racist he is. As is generally the case with such conversations, this one goes poorly. Undeterred, Josh tries to explain his not-racism to Aaron, who responds by trying to explain structures of power and privilege in America. “There’s always a black and white issue with you!” Josh yells, storming off. “That leads me to believe you’re about as ignorant as they come,” Aaron calls after him.

Unable to cope with life in Utopia anymore, a chicken falls gravely ill and is saved for the low price of $125 of veterinary care. Really, who can blame her?

Meanwhile, Mike scribbles madly in his journal: deep down, Mike is soulful, maybe. “Dear Mom and Dad,” Red says, pretending to read over his shoulder. “These people are fucking crazy. P.S. Please send me some more cookies. Love you.” It is a beautiful moment of human connection, the kind that makes fermenting raisins in a condom seem worthwhile. Inspired by such beauty, Josh apologizes successfully to Aaron, who tells him he was only mad about the whole racism thing because he cares, and Dedeker gathers the group together to announce they need to spend less money.

Night falls. It is time for Chris’s party. Given the success of the last pioneer drag show, during which the men dressed up in women’s clothing, the lady-pioneers decide to help Chris celebrate another year of chili farming by dressing up in men’s clothing and performing a “gurlesque” show of their very own. After a community bow — the show, it goes without saying, is a rousing success — Bri presents Chris with a card from his mom. “It seems like you may not have many options with the romance thing,” Chris reads, aloud. “Anyhow, happy birthday.” Chris’s mom is not wrong. Still, it might have been better if Chris had read the card silently to himself first. Let this be a lesson to us all.

Lucky for Chris, though, Bri seems forgiving, and as the party rages around them, Bris excuses itself to resume slurping each other’s faces in the bushes. “I’m glad we did not call it quits over spilled peanut butter,” whispers Bri. From the slurping, it sounds as though Chris is also glad.

The evening is going significantly less well for Hex, who, despite her star turn in the gurlesque show, has now had an alarming number of Aaron’s tequila shots. Taylor, helpfully, tells her she “sounds stupid” when she’s drunk, causing Hex to yell, or cry, or yell-cry. “They’re both drunk,” Dedeker observes from a safe distance. “Poor Taylor,” says Mike. “He’s just, like, a simple little kid.” Truer words have never been spoken: Taylor is nothing if not simple.

Hex, for her part, is nothing if not sorry, and through almost-sober tears, she apologizes to Taylor. Taylor is incredibly nice about the whole thing. He is, perhaps, the nicest human cinder block I have ever seen. They had a bad night, he tells her — so what? Taylor himself prefers to focus on the positive. “You guys put on a great show,” he points out. “You looked sexy as a dude — that’s kinda weird to say out loud, but I’m gonna say it.” Perhaps I could come around to Taylor, eventually; perhaps he has qualities that differentiate him from a cinder block after all. He and Hex retreat to go lie down. In a surprise twist, Rob trails after them, because he is also there.
Still to come: Bella’s controversial fluoride-fighting water filter arrives, and Taylor reveals his past as a male escort. Maybe something unexpected will also happen! Obviously, I will stay tuned. 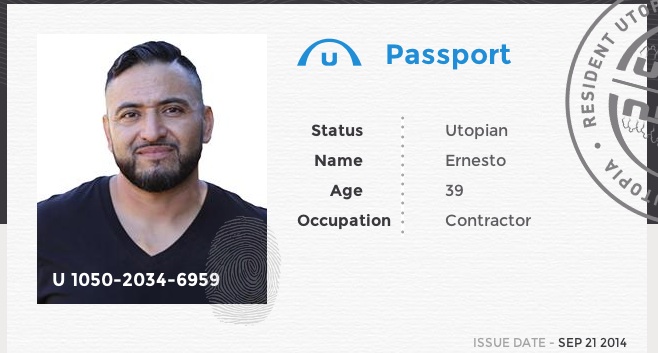