After three weeks in Utopia, the pioneers have built a sort-of society that looks almost tolerable to live in. L’shanah tovah to everyone! There is electricity and a toilets and sometimes even food. More than that, the Utopians appear to have devised a plausibly sustainable business venture, The Utopia Experience, which offers visitors the rare opportunity to experience Utopia and also meet Bella for $20. So far, the public has been obliging: business is booming, and the twenties are rolling in.

But if there’s one thing we have learned from reality television, it is this: nothing stays the same for too long. The only constant, the Zen masters tell us, is change. In this particular instance, change takes the form of Ernesto, the long-awaited 15th Utopian and replacement for fallen pioneer Pastor Jonathan. This is good news for Dr. Nikki, who is hoping the next Newtopian will be “a romantic interest for me.” Will Ernesto be Nikki’s long-awaited tantric sex partner? Probably not, it turns out when he arrives, but Ernesto, a heating and cooling specialist, seems like a real nice guy anyway. In his intro video, we learn that he goes by Ernie, that his wife died suddenly four years ago, and that he is looking to turn over a new leaf. Maybe Dr. Nikki is that leaf! What do I know?

The pioneers gather to get to know Ernesto, but are distracted by the impending arrival of their customers, and mostly ignore him. Still, his biceps and kind eyes are enough to win over Bella. “He’s mine, y’all,” she yelps, playfully. “YES!” Josh cheers. But their fledgling courtship is cut short, and the Utopia Experiencers arrive to experience Utopia. “Do we know these people, or…” Ernesto wonders aloud. Good question, Ernesto. I am also curious about where these people came from. “Adios, Ernesto!” Bella calls from her tour group, seductively rolling her Rs. She had always hoped learning that one Spanish word once would come in handy.

Having raked in another cool grand for their entrepreneurial efforts, it is once again time for the pioneers to switch up their government. Hex led the group in anarchism, Bella spearheaded a matriarchy, and now it is Amanda’s turn. As Utopia’s newly-minted leader, Amanda proposes a a new system in which all decisions will be made by her, Dedeker, and Rob. Understandably, this proposal is unpopular, particularly among everyone that is not her, Dedeker, or Rob. “To me, this sounds a little more like a monarchy?” says Hex, tactfully. “An oligarchy, I’d say,” corrects Mike. Amanda argues that no, it’s actually all totally cool, because she, Dedeker, and Rob are a perfect representation of everyone. “Agree or disagree?” she asks the group. The group resoundingly disagrees, but whatever, Amanda’s in charge, and ruling council it is!

Red is upset because he doesn’t have a position of responsibility. He is not in charge of the barn (that’s Bri), the house (Josh), or the garden (Bella, controversially), and now, he’s been passed over for the oligarchy, too. Dr. Nikki tries to explain reasons why that might be, but Red is not particularly interested in self-reflection and storms off to go smoke.

Inside, Rob points out that Ernesto hasn’t really told his story yet, and Ernesto explains to the group why he is here. Profound grief is, hands down, the best reason I can imagine for signing up to be on a year-long show that seems uniquely unlikely to launch an acting career.

Outside, Red continues to sulk.

Hex and Taylor, meanwhile, continue to do whatever it is that they’re doing. The main impediment to their budding romance is that Hex appears to fundamentally despise Taylor. “What would you do if I never showed up?” Taylor whispers, romantically. Hex pauses. Hex is terrified. Hex had hoped it wouldn’t come to this. “I wouldn’t have a cuddle buddy,” she says. Luckily for Hex, though — and really, for Taylor, too, if you think about it — Rob, Dedeker, and Kristen all arrive to join the cuddle puddle and romantic resolution is postponed indefinitely.

When morning comes, Red is still angry. “I’m very seriously considering secession,” he tells Mike and Mike’s cobalt J. Crew sweater over morning chores. This is a familiar plan; in fact, Red tried this plan less than three weeks ago, and it did not work. Still, Mike agrees that he could be on board, but only if they’re going to do it right. “You only get one chance at this,” he warns. I understand why he might think that, but objectively, he is incorrect.

Secession, however, may not be necessary after all, because it just so happens that it’s almost time for someone to go home. It’s kismet! Every month, we learn, the pioneers will nominate two candidates for elimination. Viewers at home will also nominate a candidate — America’s candidate — for elimination. Then, the final decision will be passed back to the pioneers, who will vote on which of the three potential outcasts will be kicked off the compound, just as the pilgrims did before them.

As most of the pioneers speculate about who will be thrown out of Utopia, Red begins his Utopia State of Freedom 2.0 recruiting efforts. “I’m probably going to secede today,” he tells Kristen, casually. “There’s going to be a sign-up on the refrigerator.”

Rob, who will not be signing up on any refrigerators, begins campaigning for Red’s immediate elimination. “Let me ask you a question,” he says to Dedeker. “If we had all these chickens, say we got 15 chickens…and one chicken is bothering all the rest of the chickens…what would we do to that chicken?” Dedeker understands. “You wanna eat Red?” asks Dedeker. “Don’t make me laugh,” laughs Amanda, threatening to give birth.

But even in the face of revolution, life must go on, and Ernesto installs Bella’s long-awaited filter. Bella is thrilled. “Look at how much easier that is!” she cries, prompting one to wonder what exactly Bella was doing before. Also, a neighboring beekeeper drops by to pitch the pioneers his bee business. “I’m Jake the beekeeper,” Jake announces. His idea is that he’ll set up his hives on the Utopian land, and in return, he’ll give the pioneers half of the honey and half of the wax. The pioneers, who love honey almost as much as they love wax, agree to the proposal unanimously, which is exciting for everyone, but most exciting for Dr. Nikki, who has given up on Ernesto and is now hoping to practice some tantric sex with Jake the beekeeper.

While Dr. Nikki basks in the honeyed promise of Jake, Hex and Kristen are hard at work on their next money-making scheme, which is an online auction for dates with the Utopian men. Unfortunately for Red-admirers everywhere, it is unclear if Red will be among the daters: Red, Amanda informs the group with great gubernatorial authority, has just made his secession official. “Our friend Red,” she says, solemnly, “has decided to go out on his own.” And since she’s talking anyway, Amanda has another announcement: she’s holding elections for the key leadership positions in Utopia, so “if there’s a department you’d like to head up, have a speech prepared.”

Could it be that Bella is about to lose control of her garden? Yes, it turns out, and when the group meets for the first-ever Utopia semi-democratic kind-of elections (“wooooo!” cries Amanda), the outlook for Bella is grim. Proceedings start of with the barn. Does anyone want to volunteer to lead the barn? Nope! Bri keeps the barn.Then it’s onto construction. Does anyone want to lead construction? Josh says he does, which is convenient, because Josh is already leading construction. Problem solved. But when it comes to the garden, there is discord. Hex challenges Bella’s position, and before you can say “chicken tractor,” Bella has been stripped of her weedy crown: from now on, Hex will do the gardening.

Torn from her love, Bella waxes poetic about the ways of the plants. “You’ll have a garden,” she tells Ernesto, “and you’ll have one plant that volunteers as the suicide plant and…all the bugs will go to that plant so the other plants can thrive. So you’re supposed to leave that plant alone, let it get eaten up.” Is this a metaphor? This is such a good metaphor! Does she know it’s a metaphor? (Apparently not.) In her despair, she moves her bed next to the chicken coop, which is also not a metaphor.

Under the night sky, Mike and Dedeker reflect on the day’s events. “I’ve never been happier in my entire life,” says Mike. Dedeker is surprised. At home, I am also surprised. Mike, though, appears to mean it. He kisses Dedeker with conviction. Perhaps Rihanna was right: perhaps you can find love in a hopeless place. 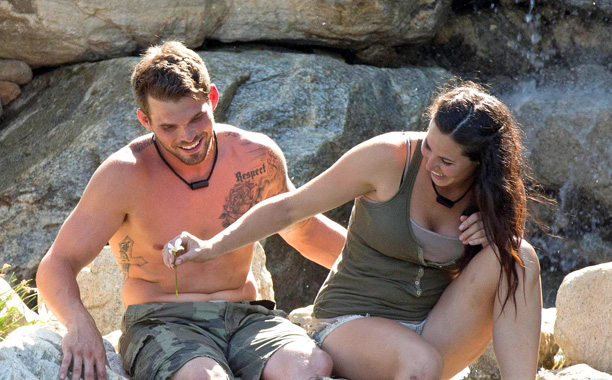