For centuries, people with shared ideals — or at least, some shared ideals, perhaps one or two ideals — have been banding together to found intentional communities devoted to forming a more perfect society. For centuries, this has generally gone poorly. And so perhaps FOX is onto something with their new reality show/”social experiment” Utopia: why gather a group of likeminded people with a shared vision to found a more perfect society, when you could gather a group of diametrically opposed people who will definitely hate each other and have them do it?? Nothing else has worked. Perhaps reality television is the answer.

And so 14 American pioneers have gathered in a remote, Southern Californian location, to shed the “shackles of convention and conformity” and build paradise. Soon, there will be 15 American pioneers — the first 14 will elect one more — but for the moment, there are 14 pioneers. Every month, a pioneer will be voted off, and every month, a new pioneer will be invited to join the community. This will keep things interesting. For the existing pioneers, this interest is important because it will provide a steady stream of new potential sex partners. For audiences, this interest is important because this show is slated to go on for a year, airing twice a week for at least the first month, and live streaming 24/7. It has been live streaming since August 29th. In my living room, it is live streaming right now. But this is nothing: the Dutch version of the show, which has been airing since January, is broadcast five (5) days a week, plus the live-streams. Unsurprisingly, the Dutch appear significantly more committed to the utopian project.

As the two hour American premier begins, a man who is, despite appearing to be Elvis Costello, is not actually Elvis Costello, informs us that these pioneers will be starting their own world with their own rules. It will be like The Real World, but also like Big Brother, and also like a nightmare undergraduate study abroad experience. The only prize, he says, meaningfully, is “something invaluable.” And then, as the camera pans to a “Utopia” sign over the gate to the Utopian campus, the pioneers begin to trickle in.

Hex is “a huntress” from Detroit. Jonathan, a pastor, known from here forward as “Pastor Jonathan,” explains that he is leaving his family for “the gospel’s sake.” Bella is a survivalist prepper, but as she will soon clarify, she is not prepping for the end of the world, but rather for a new beginning. She cares about the environment. She feels strongly about composting (pro) and toilets (con). Rob, patriot, libertarian, resident of New Jersey, declares his new surroundings “legit.” Josh is a general contractor who sounds suspiciously like Jason Segel and is, in his own words, a “sexy beast.” Dave is an ex-com looking for a fresh start. Dedeker is a polyamorous dancer. Red is a self-professed hillbilly who hates “lazy people” and “people that are just stupid.” There are also other six other pioneers, none of whom have defining characteristics yet.

The Utopians convene around a big table, where they sit on tiny crates filled with their remaining worldly possessions as a disembodied voice welcomes them to utopia and explains the many amenities of their new and virgin lands. For those of us at home, these amenities are illustrated with bizarre computer generated 3-D holograms: many chickens, 2 cows, a barn, a waterfall, and a lake. Then, the disembodied voice tells the pioneers that they must combine the possessions from all their tiny crates into one big crate, which will require significant pruning. Everyone puts in one item. This causes Utopia’s first conflict: Bri, a vet aide, advocates keeping her bug spray, but survivalist prepper and general bug-friend Bella says insects are important and we need them, especially for our gardens. But Utopia’s first conflict is quickly upstaged by Utopia’s second conflict: ex-con Dave refuses to put any of his belongings into the crate unless he can put all of his belongings into the crate. On the one hand, this does not make Dave seem particularly stable, but on the other hand, he gets to keep all his stuff. You win some, you lose some.

Having tired themselves out with crate-sharing and screaming, the Utopians gather around for dinner. What is dinner? I don’t know, because they only have flour, pickles, and alcohol. But they are gathered around eating something, or they will be, as soon as Red says grace. Sexy beast general contractor Josh doesn’t want to say grace. Red says grace anyway. Josh instates a talking stick. So far, talking has not been much of a problem for Josh.

Chef Aaron, who knows a thing or two about rationing flour and pickles, gets the stick to say he thinks the group can only afford to eat twice a day. Amanda, a behavioral specialist, informs Aaron that she is not interested in eating twice a day. “Are you open to another way of living?” Josh asks Amanda. “I’m already open to another way of living. I’m eating out of a pot outside,” she tells him. Good point, Amanda.

Also, it allows everyone to get extremely drunk, which ultimately results in Josh adopting a mysterious accent, becoming belligerent, aggressively trying to kiss Hex, getting into a fight with Dave, and ultimately being put to bed in the barn. With Josh in bed, the evening calms down enough for Pastor Jonathan and Dave to have a fight about whether the Virgin Mary was or was not actually a virgin. Bri and Chris, who still has no defining characteristics, hook up. They both love animals, they confess to each other, pre-coitally.

Elvis Costello of the Hills (cartoonist and host Dan Piraro) tells us that though the pioneers have “had the opportunity to start their own Eden,” so far, “they’ve failed. It’s been chaos.” In defense of the pioneers, it has also only been one day.

In the morning, Hex is still vomiting. She has been vomiting all night. Pastor Jonathan prays over the increasingly ill Hex. Bri and Chris agree that it’s a “tough situation.” Paramedics are called and Hex is taken to the hospital for alcohol poisoning. Josh, who remembers very little of the previous evening, emerges in a towel, but decides to put some clothes on before what will be his trial: the group has decided to create a makeshift legal system to deal with Josh’s drunken predations.

For neon lawyer Mike, this is a dream come true. “I think I’d consider myself more of a thought leader than a work horse,” he tells the camera, and now, finally, he has stumbled upon a chance to apply his thought leadership! Luckily, he has brought his gavel.

After heated debate, six Utopians, including Bella, Bri, and Pastor Jonathan, vote to expel Josh, but seven Utopians, lead by Aaron, Rob, and ultimately Hex, who confesses her own alcohol-based demons, want to give him a second chance. Josh will be on probation, they decide, which means no drinking and no sexual or physical threats. Josh, who is now both embarrassed and sunburned, agrees, and a legal system is born.

Speaking of birth, Amanda decides now is the perfect time to announce she is pregnant. She wants to have her baby in Utopia, she says, because it will be a place she helped build. Also, she is due in “November or December,” which, for those keeping track at home, is 2-3 months from now, after which point she will be in Utopia with an infant. Momentarily, everyone is happy, with the possible exception of Pastor Jonathan. Amanda is not married, and refuses to confirm the gender of her partner.

Still, it is time to get to the hard work of building Utopia, which means things like digging trenches and inventing electricity. Newly-humbled Josh and Mike, still high on justice, are prioritizing construction tasks, when Bella approaches. Actually, “chicken tractor” should be a priority, she informs them. A chicken tractor is an enclosed chicken tunnel that will allow the chickens to till the soil in the garden. One bird can do the work of a man, says Bella, demonstrating a chicken tilling soil. In a surprise twist, Josh, who has never agreed to anything, agrees: there will be a chicken tractor.

To show their enthusiasm for the chicken tractor, non-character Chris and vet aide Bri make out in the hammock.

But when the sun comes up — it’s Dave’s birthday today, announces Dave — there is bad news from the chicken coop. One of the birds has died. Hex wants to cook and eat the bird. Aaron, the Utopian’s unofficial chef, points out that in general, it is preferable not to eat animals who have died of mysterious and natural causes. He is, he says, not comfortable cooking the poison bird. Red, who has grown up eating poison birds, says the chicken is fine. To show that he is angry, Red then pours all over the ground, upsetting Bella. Red retreats with the dead chicken. 1/15th of everything in Utopia is his, he explains, including this dead chicken. Realistically, he can probably have more. Most people don’t want the dead chicken.

Red, however, really wants the dead chicken, and also respect from Aaron. To obtain such respect, he picks a fight while holding a chicken leg. The yelling escalates. They are fighting about Bella, or about the chicken, or about name calling, or about respect. In an inspired editing sequence, this fight is juxtaposed against lawyer Mike and Josh discussing nail care. “I don’t usually get manicures,” confesses Josh, studying his fingertips. “but I get a pedicure.” Aaron screams that if Red touches him, he will [do something bleeped out].

In the grass, the women discuss their menstrual cycles.

Red decides to leave Utopia, which is the first reasonable impulse Red has had since his arrival, but is intercepted by Pastor Jonathan and birthday boy Dave. Dave tells Pastor Jonathan he wants to talk to Red alone. Poor Pastor Jonathan! He is surrounded by so much sin, and also, he isn’t even a particularly good conflict negotiator. You know who is a particularly good conflict negotiator? Dave. Red wants Aaron thrown out, given that Aaron “threatened his life,” but Dave convinces him to stay, because it is Dave’s birthday and you can’t leave on Dave’s birthday.

Red and Aaron make up. Dave is a star. Arch nemeses Josh and Bella begin a flirtation (“You’re so funny, you’re so amazing, I love your personality, zip up your zipper!”). Thought-leader Mike wears a neon shirt. And all is right with the world. Utopia has begun.

As the credits roll, I switch to one of the live streams, where Chris is explaining the concept of Kickstarter. Fall is going to be great. 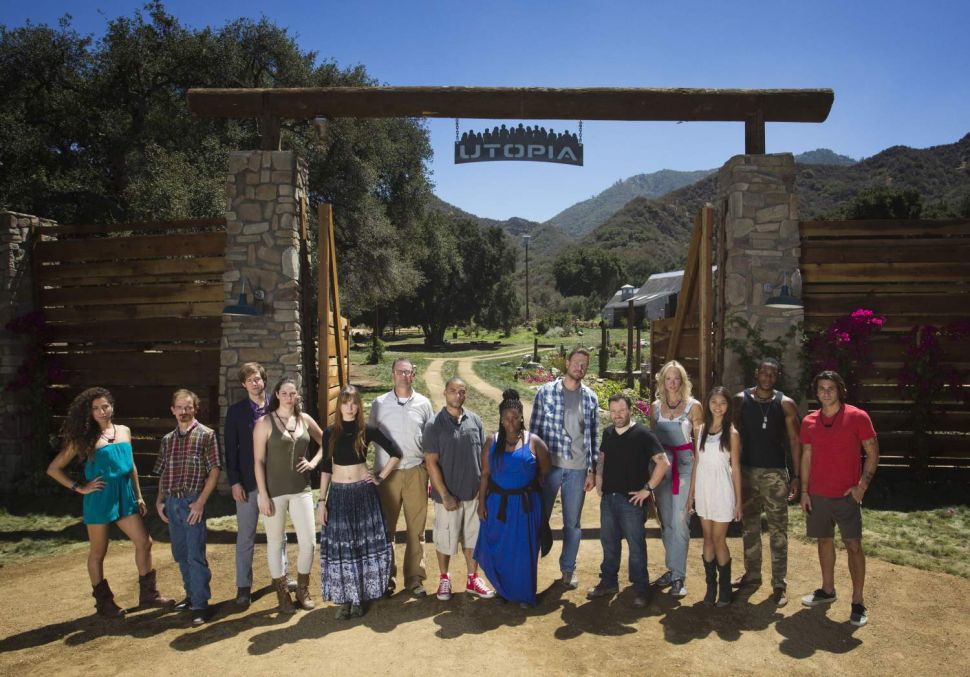