The second episode of Utopia picks up where the first episode of Utopia left off, which is to say, not in Utopia, but in an unsettled semi-farm inhabited by 14 unhinged pioneers. Unhinged is a strong word: probably, the Utopians are not unhinged. Probably, they are just hungry — so far, there is little food in Utopia. When I am hungry, I am very unpleasant. If I am ever on a reality television show, I would like it to be one where there is regular access to food.

But as the sun rises on the fourth day of Fox’s social experiment/sleep-away camp hellscape, the pioneers are looking uncharacteristically blissful. Dr. Nikki, who is, apparently, a medical professional in addition being to a yoga teacher and tantric sex enthusiast, is doing yoga. Bella, a survivalist prepper, is feeding the chickens. Bella has a vested interest in the well-being of the chickens, because her plan, as previously established, is to have them till the soil via “chicken tractor.” Trust her, it’s going to be great. General contractor Josh and libertarian Rob dig a trench for the soon-to-be power line. This, actually, is going to be great, because among other things, the power line will allow the pioneers to order food using a cordless telephone. Based on my own pioneering experience playing Oregon Trail, this seems like cheating, but then, pioneering ain’t what it used to be.

Soon, it is time for a pioneer general meeting to discuss how to spend their extremely limited pioneer money. Manhattan lawyer Mike leads the meeting. It has always been the dream of Manhattan lawyer Mike to lead meetings such as these, because Mike is a thought-leader. Mike loves government. Mike loves tank tops. The pioneers discuss the possibility of a refrigerator, and also of a computer. Bella, however, is interested in survival: she cannot stay they get a filter. “A lot of y’all don’t realize,” she warns, ominously, “there’s something called fluoride in the .” Hillbilly Red objects, both to the filter and to the premise of communal decision-making, as does his BFF, ex-convict Dave. What Dave wants, says Dave, is his share of the money, not his share of a filter. Hex, a “huntress” from Detroit makes the extremely valid argument that dividing the money up into “shares” is both ideologically problematic and logistically stupid.

Dave and Red, however, are generally undeterred by stupidity: that is part of their charm. Also, they love tap . They can’t get enough tap . Based on this shared love of tap , and also a hatred of collective decision-making, they decide to start their own state: the Utopia State of Freedom, or USF, not to be confused with the University of Southern Florida or the University of San Francisco. The premise of the state is that they are going to eat Vienna sausages and beans, drink tap , and not work all the time. Dave hopes they will also play a lot of chess, though Red neither confirms nor denies this possibility. “You’re like the confederate cut-out,” says lawyer Mike, trying to understand the plan. Red is offended. They are NOT confederate. They are the “freedom cut-out,” which is pretty obvious, given their name. “So you’re going to secede somehow,” Mike tries again. “No, we’re not trying to secede, ’cause seceding, we’d be totally separate.” “Yeah,” says Mike, nodding slowly.

Across Utopia, Bella works on her chicken tractor.

Meanwhile, Chris and Bri, the first couple to form in this brave new world, are whispering sweet nothings to each other in the field, as young farmers have for generations. “This is the longest I’ve gone without having sex in a freaking amazing long time,” says Chris. It is, again, Day 4. “Your seduction technique is totally working,” Bri responds. Is Bri funny? I cannot tell if Bri is funny. Bri might be funny.

What is totally not working is Red, Mike, Rob, and Dave’s attempt to determine the best way to allocate Utopia’s finances. Red would like to divide all the money equally among the pioneers, but Mike feels this is unfair, since some people will eventually begin making more money than other people. “You gotta pay a poor tax,” shouts Dave. This alarms Mike, who is “not gonna live in a communist system!” A second ago, it sounded like that is exactly what Mike wanted. Generations of political theory are unfurling before us! But Josh, who does not share Mike’s penchant for thought leadership, arrives to suggest that perhaps they would be best served by doing “something productive.” Digging a power line, for example. After a fight (Rob vs. Red) and a meaningful hug (“Can we have our moment?” Rob asks), the gentleman disband their congress to join Josh in the trenches.

In the lake, Hex gets a topless hair wash from Bri. “This is my utopia,” says Josh, helpfully. He is on a trench-digging break. Chef Aaron, however, is not in utopia, and he pulls Hex aside to talk to her about her nudity, which he finds excessive. “I just don’t understand how flesh and bone became so sinful!” cries Hex. “Um, organized religion?” suggests Bri. Bri! Bri remains full of surprises. I’m rooting for you, Bri. Dave, however, is not rooting for Bri. As the not-secessionists of USF drink moonshine from a rusted tea kettle, Dave confesses to Red that he is thinking about recommitting his life to Christ. As a first step, he ventures back from the semi-autonomous Freedom State to read Ecclesiastes with Pastor Jonathan, who has left his wife and two children to spread the gospel in Utopia. This makes Pastor Jonathan very happy. It is the little victories, I think to myself.

As night falls, godless Bri and Chris snuggle on the grass. In addition to being a musician, Chris is also a chili farmer. “What are you thinking about right now?” Bri asks Chris. “I’m thinking, like, where could you fuck here,” he says. The thing about Chris is his honesty. At home on the chili farm, this is what people admire about him most.

Across Utopia, Bella continues to work on her chicken tractor.

And then, finally, there is progress: Josh has successfully wired electricity. The lights flicker; the lights turn on. The Utopians have now reached something slightly closer to the standard of living they had before they decided to be on Utopia. “Break out the hairdryer!” screams a gleeful Dedeker, the polyamorous dancer from Los Angeles. Mike is similarly excited about the hairdryer. “A whole new world of Utopia just opened up for us!” says Dave. For example, they can now use the cordless telephone to order groceries, in addition to the hairdryer. Surely, groceries are a topic they will all agree upon and there will be no problems.

The sun sets. The sun rises. It is now Day Six. There are problems. “If it don’t taste good, we can’t eat it,” argues Dave. Unfortunately for Dave, he is not in charge of ordering the food. Chef Aaron places the call: “Do you have quinoa?” Aaron asks. He asks about radishes. Dave wants him to ask about ramen noodle soups. Dave threatens to break the phone if he does not get ramen noodle soups. If I were Aaron, I would ask the dude on the phone about ramen noodle soups, but I am not Aaron, and Aaron does not ask. Predictably, Dave and Red fly into a rage and destroy several cans of something that is either peaches or pineapple. On the bright side, across Utopia, both the chicken transporter and the chicken tractor are working great.

When the food arrives, everyone is happy, except Dave and Red, who are not happy. It is “rich people food.” They’ll go it on their own, they decide, and as Dave waxes poetic about chess, Red cracks the code to the safe and withdraws USF’s supposed “share” of the money. They’ll still help on the farm and stuff, Dave tells a skeptical Hex, but purchasing will be separate. This is okay, and only right, because they are “indigenous” to this land. “I’m an aboriginal,” Dave bellows.

Bri, however, has moved onto bigger concerns: what will her and Chris’s couple-name be. “What would Brad and Angelina Jolie’s be?,” Chris counters. “Brangelina?” Bri says. Chris agrees that Brangelina is “not so bad.” It is isolated, out there on the chili farm. For them, he chooses “Briss,” which pleases Bri greatly. It’s going to be a good night for Chris, thinks Chris. In the distance, a deer jumps over a fence, athletically.

It is also going to be a good night for the Utopia Freedom State, because while Dave and Red may be volatile and sometimes violent, they also understand the basics of political operating: when in doubt, throw a barbecue. This works especially well if everyone you are inviting to your barbecue is starving. To be clear, no one actually joins the Utopia Freedom State — as a recruitment effort, the barbecue fails — but everyone eats hot dogs. “You don’t force me to be vegan,” Dave bellows, again. “That ain’t American!” Back in the barn, Dr. Nikki and Bella discuss sprouts.

Aroused by the barbecue, or perhaps by having managed six whole days without intercourse, Chris leads Bri away from the group and up to the hayloft, where he believes there are no cameras. He is incorrect. A partially clothed Chris straddles a partially clothed Bri against a bale of hay. “Is now a good time to define our relationship?” breathes Bri. Bri is not joking. Alternately, Bri is telling the best joke. The camera cuts away. From below the hayloft, a forlorn cow moos.

“Is this happenstance, history, or human nature?” wonders host Dan Piraro. I am mostly wondering if the cow is getting enough to eat, given that no one has ever mentioned feeding the cow. Also, why has huntress Hex not hunted anything yet? For both me and Dan Piraro, there are more questions than answers in Utopia. Stay tuned. 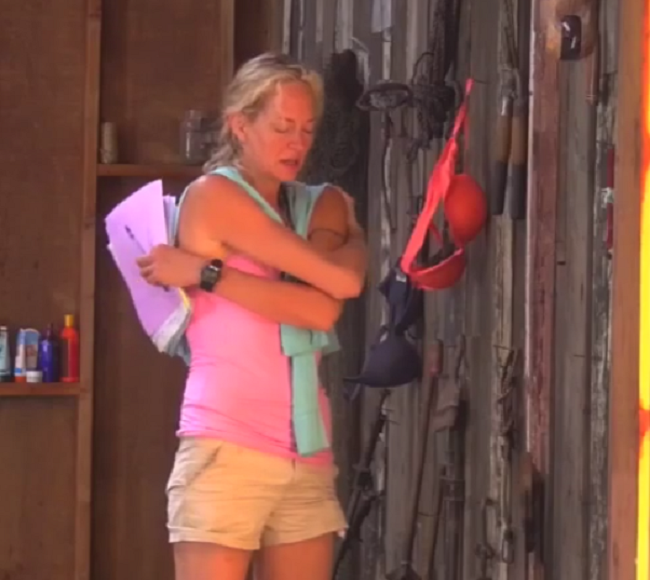