Only a week in Utopia, and already, the population has begun to dwindle, thanks to ex-convict Dave’s untimely departure on Friday. Now, there are only 13 pioneers left, 13 pioneers entrusted with the task of building a more perfect society. Luckily, Fox has brought in two potential new Utopians — Newtopians — one of whom will take over where Dave left off, though perhaps somewhat less violently. The candidates are Tea Party organizer Rhonda, and entrepreneur Kristen. Kristen has now been on the show for three days and two episodes, and still, I do not know in what sort of entrepreneurship she traffics. The Utopians must choose only one of them.

“When you have great minds, you can do a lot of great things,” Rhonda tells the group. Rhonda is a great mind, in Rhonda’s opinion. She will fit in well. Kristen tells the group that the secret to Utopia is money. “We need to do more financially,” she advises. The Utopians agree: they do need to do more financially, good point Kristen. For this wisdom, and also for her ambiguous entrepreneurial skills, Kristen is invited to stay. Rhonda seems genuinely happy for her. Alternatively, Rhonda is genuinely happy to leave Utopia.

To celebrate, Bri briefs Kristen on the inter-pioneer romantic landscape. “A lot of the girls here are like, real thirsty,” observes Kristen. “Bella’s the thirstiest. I get it, ’cause she’s older, but she’s so thirsty.” Kristen, however, is not the “thirsty type.” “I’m a grown woman,” she tells Bri. “I can take care of myself. I’m not thirsty.” Bri giggles. Bri knows nothing of thirst. Bri has musical chili farmer Chris to sate her. As if on cue, Chris and his naked torso walk by, holding a tree stump. “Look at all the scratches I left on him!” Bri purrs. “Oops!” It is the most personality we have seen from Bri since she made a joke that one time, and yet it rings hollow. Bri’s personality is like watching an reenactment of someone else’s personality.

In the barn, Josh is pricing out potential purchases on their newly-wired cordless telephone. He would like to install a gas line, which will, among other things, allow them to actually use their new gas stove. Bella would like to install a filter, because fluoride kills. Six-month-pregnant person Amanda, however, would like to install nothing, because she is concerned about money. This is a reasonable concern, but also one that might have been more productively raised before the group bought a gas stove. Then again, hindsight is always 20/20. “These people does not know a damn thing about survival,” mumbles hillbilly Red.

Meanwhile, Pastor Jonathan is having some survival problems of his own. Two days ago, we are told, he was playing a particularly vigorous game of catch with Josh, when he got hurt and broke his thumb, “right where the dark little crack is.” According to the Utopian nurse, he’ll need surgery to avoid permanent damage, which means leaving Utopia for an estimated six to eight weeks. Bri is incredulous: “you’d have to leave Utopia?” she says, aghast. She has never heard of such a thing. “We need pastor here more than you even know,” Bella moans, through tears. “I guess I got some decisions to make,” says Pastor Jonathan. He will do what God wants, as long as what God wants is for him to have the surgery.

But whirligig of time stops for no injury, and on the phone, Bri is trying to buy a rooster from a local farmer named Lefty. He usually charges $25 for a rooster, he informs her, but Bri gets him down to $15, through the power of her non-personality alone. When farmer Lefty arrives, he explains that this rooster is no ordinary rooster: this rooster is a rooster named Enrique Carisol. Sensing the opportunity to further discuss chickens, Bella approaches Lefty for his advice on chicken tractors. “Chicken tractors are great,” he tells her. Upon her request, he repeats this assessment to the group: “chicken tractors,” he says, “are great.” What is not great, Lefty says, is the state of the Utopian garden, which needs to be kicked up “a big notch.” It’s going to get cold in the winter, he reminds them, surprising Josh. Winter has never occurred to Josh. Josh is a man of the present.

Pregnant Amanda, however, is a woman of the future, and accordingly calls a meeting to discuss potential business ideas. Josh suggests that Red host “hillbilly survival classes.” Hex pitches a plan in which she will make jewelry out of found objects. Bella also has an idea: what if the pioneers should sell memorial rocks in the garden, and then people could those rocks dedicate to their pets, or perhaps, their dead loved ones?!? Dr. Nikki proposes yoga classes. People nod. The main advantage of yoga is that it is not selling dedicated garden rocks.

As night falls, Pastor Jonathan prepares to leave the compound for medical treatment. God has sent him to Utopia, he explains, and if he has to leave, well, at least lives have been touched. “He reminds me a lot of my dad,” sobs Hex. “Anyway you slice it, he’s a good man,” says Josh. Across the field, Rob is preparing to express his feelings to Pastor Jonathan directly. “Um, I was trying to think of something to say,” he begins. “You know, I’m not religious or anything.” He’s crying. He wants to take care of pugs. “And um, having you around was good.” Pastor Jonathan is crying now, too. I am crying. This is the power of art. “We have a saying in the marine corps,” Rob continues. “Some people wake up every morning wondering if they’ve touched someone’s life. Marines don’t have that problem. Neither do you.” Rob and Pastor Jonathan hug.

In the morning, Pastor Jonathan will be gone.

Also in the morning, Bella lets the chickens out. Bella may be sad about Pastor Jonathan, but she is feeling great about her free-range chickens. Unfortunately, Hex is feeling less great Bella’s free-range chickens, who are now roaming the property unsupervised, pecking at piles of cow manure. “I don’t want to yell at the chickens, ’cause Bella says I have a bad aura,” Hex explains to Red, “but, um, Bella’s an idiot and now they’re gonna run away.” Red agrees that Bella is “crazier than a dadburn fruitcake.”

Having decided upon their business plan — $40 “Utopiyoga” yoga classes this coming Friday — the pioneers are free to celebrate, which they do, with a drag performance by Josh and Mike. This is what happens when Pastor Jonathan leaves: unabashed hedonism, or community theater. It is the first party that has not ended in tears. Perhaps there is hope in the world.

Amanda certainly thinks so. She is “probably just about seven months now,” she tells Dr. Nikki, as they lie in the grass. Dr. Nikki wants to know if she’ll have the baby “in nature.” “NO!” says Amanda. United by the bond of womanhood, they laugh fertile, feminine laughs. Josh joins them. Josh cannot resist such feminine charms. He wants to build a “love shack,” he announces, because he needs a “slump-buster” — something, anything, to bust his sexual slump. He is not alone. “I haven’t even gotten a throb or anything,” Nikki says. “It’s like, dead down there.” Ever civic-minded, Josh offers to help. “Are you trying to say you want to have sex with me?” Nikki asks. “You’re probably the only girl here I would…” Josh trails off. “I think you’re my only option at this point.” Nikki agrees that if she is ever “really horny at some point,” she will let him know. “It’ll happen, too,” nods Josh, sagely.

Before Dr. Nikki and Josh can consummate their love, however, a new-Newtopian arrives to replace Pastor Jonathan. So far, population retention has been an ongoing struggle for the fledgling society. Hex hopes the new-Newtopian is a boy, and when Taylor arrives, it is clear: Hex has gotten her wish. Taylor is more than a boy. Taylor is a Nebraskan construction worker who enjoys cooking, hunting, and cage fighting. He has dreamed about living like a pioneer, he tells the cameras, because he has seen movies about pioneers, and also, sometimes, television shows. He is beautiful. The women of Utopia bask in his Nebraskan glow. The men of Utopia appreciate that he has brought them a side of beef. So far, things are going well for Taylor.

Arguably, they are going even better for Hex.

To celebrate Taylor’s entry into the community, and also because it is Friday and they have advertised it on the posters, the Utopians prepare for their first class of yogis to arrive. Amanda reminds the group to smile. Aaron reminds the group to wear deodorant. “The blowdryer’s available for anybody!” adds Lawyer Mike. Mike loves the blowdryer almost as much as he loves justice. Privately, though, he expresses his doubts to Kristen. “Nobody’s gonna show up,” he mutters. “There’s like, air conditioned studios.”

True, it turns out: When the gates open, there is but a lone yoga customer, Ben. Ben and his roommates are obsessed with Utopia, Ben announces. Ben is excited. Ben cannot believe this is happening. “Is there anyone else?” Nikki asks him. There is no one else. For one-on-one attention like this, $40 seems almost reasonable. “Why are we doing yoga,” Mike wonders aloud. “These bright ideas are dumber than hell,” Red mutters. Ben stretches. For him, a dream has come true here. For the Utopians, today has been a disaster.

Amanda, however, will not be pulled down by the general negativity. In her assessment, “today was definitely a fabulous day,” because they didn’t actively lose any money. The group does not share her opinion. “We need to improve, we need to get better” Josh says, outlining everything that went wrong. Amanda would like to focus on the positive. The positive is that the group now has 40 of Ben’s dollars. “$40! Wooooooooooooooooo!” Amanda cheers, alone, as the lights fade.

Coming next time: Red goes hunting, Chris and Bri break up, Taylor goes swimming, and also there is a close-up of a deer. Utopia just keeps getting better, I think to myself. On the live stream, Amanda is arguing that homosexuality is caused by spirits. I consider upgrading my streaming. For all this, $4.99 seems like a bargain. 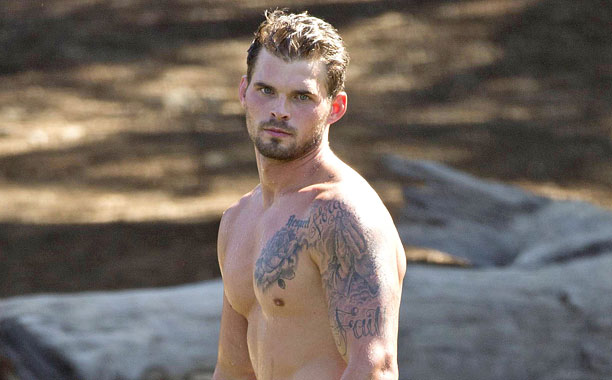