Mayor Bill de Blasio is not questioning the way he takes questions.

That much was made clear today when the mayor said he had no intention of undoing the practice of mandating what types of questions, at certain points in time, reporters can ask at press conferences, despite a recent letter from the New York Press Club criticizing his approach.

“We think we’re doing it the right way. I try to make myself available a lot. We’ve had a number of availabilities this week as you’ve seen and we think that’s the best way to organize these things,” Mr. de Blasio told the Observer at an unrelated press conference in Brooklyn.

Like his predecessor Michael Bloomberg, Mr. de Blasio mandates that reporters first ask questions on the topic of his particular announcements before he takes questions unrelated to the event. Some City Hall reporters have chafed at the requirement because it can limit the number of questions the mayor takes beyond the topic he planned for and sets an agenda reporters don’t necessarily want to follow.

“When reporters try to get answers on other matters deemed vital to their readers, viewers or listeners, you admonish them: “On topic!” and refuse to take questions on a subject not set by you. That anti-press gimmick was invented by Michael Bloomberg,” said Larry Seary, the president of the New York Press Club, in an open letter to Mr. de Blasio.

“You have departed from a precedent set by at least eight mayors before you, which has been to take questions in open press conferences without restriction as to the subject matter,” he continued. “You have promised to run a “transparent” administration. But the conditions you set on virtually a daily basis are not transparent but opaque. What gives you the right to set the agenda for what journalists can ask you about? Is that in keeping with the fundamental right of freedom of the press?”

Mr. de Blasio, when pressed further, offered no full explanation for the mandate.

“We think it’s the best way to organize it,” he said curtly.

By requiring questions on and off topic, Mr. de Blasio all but forces journalists to ask questions about his own event, media observers say. Mr. de Blasio is more willing to take additional questions on the topic at hand than off topic: just today, when Mr. de Blasio announced $108 million in federal funds had been allocated to Coney Island public housing for Hurricane Sandy recovery, he willingly took a question from a reporter about the city’s Build It Back program during the off topic phase. As Mr. Seary’s letter noted, that is rarely ever true for the reverse situation.

Mr. de Blasio, however, has won some praise in media circles for his treatment of the press compared to Mr. Bloomberg. The mayor does appear to allow as many, if not more, opportunities for reporters to ask him questions and provides more notice of his whereabouts throughout the day. Defenders of Mr. de Blasio also point out that he provides transcripts of his press conferences to reporters, something Mr. Bloomberg never did. 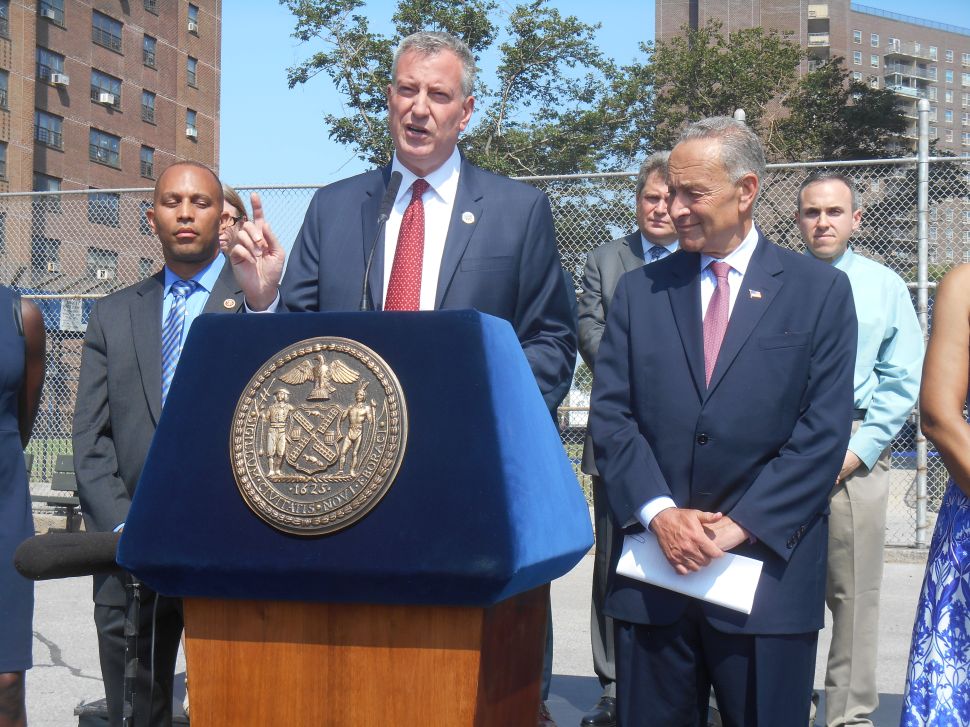