Brooklyn Councilman Jumaane Williams and Manhattan Councilman Ydanis Rodriguez joined hundreds of left-wing protesters in obstructing the streets of the Financial District this morning, a day after 310,000 demonstrators participated in the People’s Climate March to pressure the United Nations to take action on climate change at its summit Tuesday.

In a move reminiscent of the Occupy Wall Street protests of 2011– in which both Mr. Rodriguez and Mr. Williams participated–“Flood Wall Street” activists gathered in Battery Park City at 9 a.m. and marched north at noon to block the intersection of Morris Street and Broadway, near the iconic Charging Bull statue. Police stood by as demonstrators bypassed and moved their barricades.

The demonstrators held up banners reading “Corporate Capitalism = Climate Chaos” and chanted “We are unstoppable–another world is possible.” Both politicians, however, were more measured in their rhetoric.

“I’m more here as an observer, to be sure everyone’s voices are heard here today,” Mr. Williams told the Observer, though he admitted that he shared the sentiments of the crowd. “I’m a very big supporter of the message that is being said.”

Mr. Rodriguez said he was in attendance to spread the message of concern over climate change–which most scientists attribute to the increased presence of carbon dioxide gas in the atmosphere, a result of burning fossil fuels. The legislator said he hoped President Barack Obama would pressure the U.N. into creating an international agreement strictly controlling pollution.

“I’m here because I have two daughters and I want for my daughters to have a safe planet,” said Mr. Rodriguez, citing recent extreme weather events like this past winter’s polar vortex and 2012’s Hurricane Sandy. “Climate change is a crisis.”

Both electeds demurred, however, on the claims of the far-left elements in the crowd that the capitalist system is to blame for environmental problems.

“I think we have to get to a point where we can say it’s okay for people to make money and be comfortable, but not at the expense of other human beings and the planet,” said Mr. Williams. “Events like this, people may not like and people frown at them, but they’re the only things that have ever changed the world.” 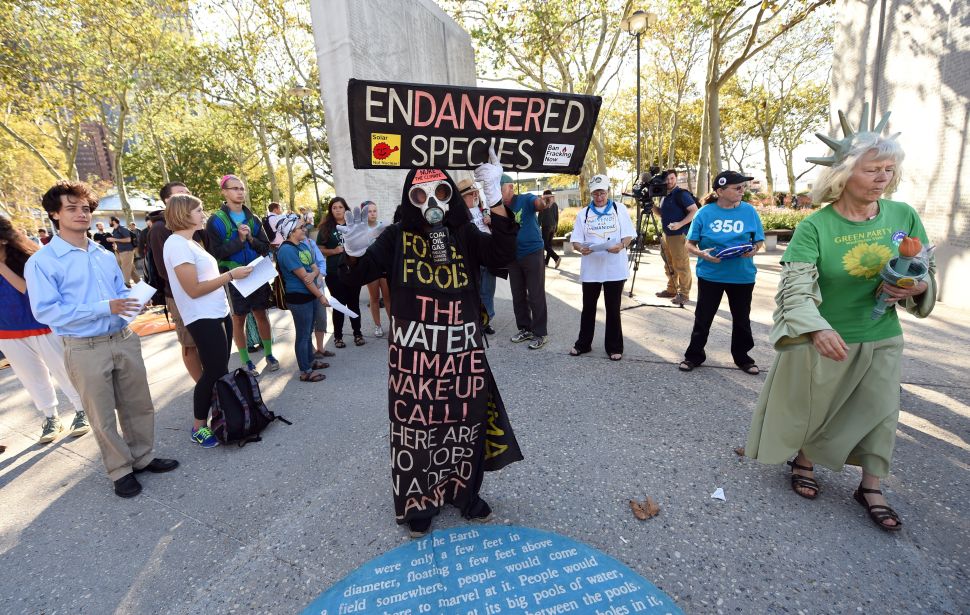