Of late, there has been much wringing of hands and gnashing of teeth over the lost Bohemia that was once Williamsburg, an almost unbearable nostalgia for those halcyon days of the mid-90s when lofts were paint-spattered, warehouse parties raged and would-be world-leader types such as Mikhiel Saakashvili stayed on their side of the river.

Before, that is, the Urban Outfitters and the Starbucks and the Whole Foods and the Gant and the J.Crew and the waterfront condos where mysteriously, independently wealthy people like Mr. Saakashvii, the former Georgian president, spend their time when they’re not hanging out at the Wythe Hotel. The sort of people, that is, who marvel at the neighborhood’s energy and vitality of the neighborhood while simultaneously enervating it.

At this point, the most pressing question raised by the state of Williamsburg seems to be whether it’s even worth caring anymore. The chains are metastasizing so fast it’s hard to keep track of what one should be most outraged about. It seems that just yesterday everyone was up in arms about Dunkin’ Donuts coming to the neighborhood, now there’s a DD and a Starbucks and a second Starbucks on the way, though it used a different name when it applied for its new outpost’s liquor license. Such is the ongoing animus against chains that many remain wary of attracting the negative attention of the few locals who might possibly care: as Crain’s reported, a number of companies like mega-brand Diesel, who secretly opened a boutique last month under the name 101, have disguised their outposts in the borough. And as for mom and pops getting pushed out, it’s too late. As Bedford and Bowery reported in March, landlords have already ousted lower-end tenants in anticipation of deep-pocketed nationals, opting to leave their stores empty rather than renew a lease with a simple dry-cleaner or non-vegan donut shop.

In all this missing and complaining, fearing and guilt shopping, it can be easy to forget just how pretentiously awful indie stores can be. To wit: we received an email today touting the October opening of a luxury boutique called “Concrete + .” (Because nothing says luxury like concrete and .)

The boutique, founded by a “super creative couple,” will open at 485 Driggs Street, as “Williamsburg is increasingly becoming a destination for luxury, and this new boutique will join the growing presence of elevated retailers in the neighborhood” as the release put it.

And what will this boutique sell? Apparel, accessories and home wares “as inspired by the vibrant colors of the tropics as the classic tones of the street” that will “lend a carefree note to classic style.” Because? “Both the store itself and the goods within embody the belief that quality design is universal and can take you anywhere.”

If you’re wondering what this might look like in the real world, apparently it will look like a sweatshirt with elbow patches that reads “Brooklyn Parle Francaise” and beard oil, among other things. Renderings of the store show a vast quantity of empty space with white garments and white shoes arrayed along white walls. Per the release: “design concepts like white walls, polished concrete floors and wood accents will lend a clean and refined look.”

We did wonder if maybe we were being pranked, but found a Timeout New York write-up that cooed about the store’s $360 shearling stowaway bags, while assuring “bargain lovers” that there would be “affordable merch” like $38 glass mugs and $60 t-shirts. Concrete + was also featured in New York Magazine‘s fall preview list.

And because super creative people aren’t the sort to be satisfied with just selling things, even elevated things that embody the belief that quality design is universal and can take you anywhere, the backyard will also host an events space. One of Concrete + ‘s two founders, JD Gluckstern, has worked as a DJ and in the hospitality industry “forging meaningful relationships with some of the city’s prominent tastemaking individuals and companies.”

No word yet on whether the store will carry the much sought-after $81 OAK candles celebrating Bushwick corner McKibben + Bogart. 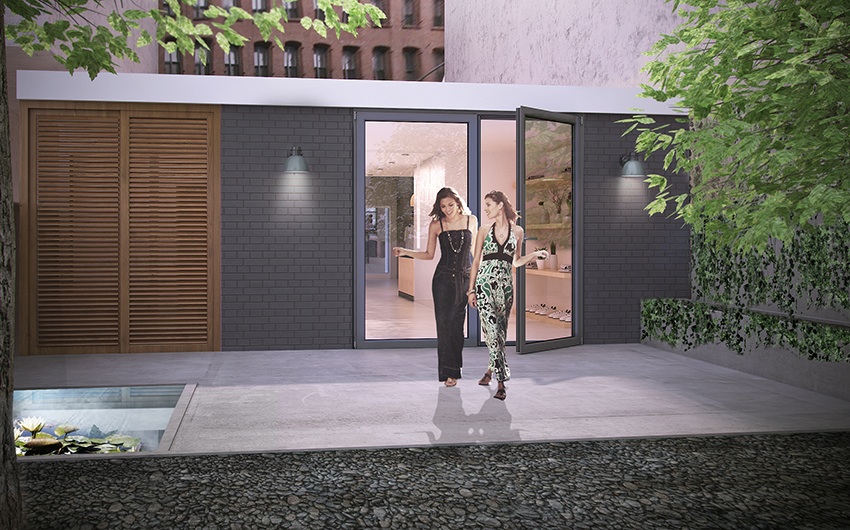