Nothing sparks book party socializing quite like combining champagne, a clothing swap and a fashionable set of smartly dressed literary ladies. Booze and witty dish are common enough accoutrements, of course, but new outfits really elevate an evening.

To celebrate the publication of Women in Clothes—a compendium of essays, interviews, surveys and art projects that explores the relationship between women and clothes, fastidiously compiled by the novelists Sheila Heti, Heidi Julavits and Leanne Shapton—a roomful of mostly female writers gathered at Rachel Comey’s Soho boutique last week, as Ms. Comey is one of the contributors. Well, there are 639 contributors. It’s 514 pages long.

Simply bringing an old cardigan would not suffice: the invitation stated attendees needed both an article of clothing to exchange and also the story that went along with it. The premise of the project, after all, is that every item of clothing has a background that can be intellectualized and contextualized.

“We didn’t want the focus to be on us, because we’re not the focus of Women in Clothes,” the editors, who are currently hosting clothing swap parties in other cities, said in an email to the Observer. “It seemed like a nice way to allow the people who came to the launch to interact with strangers.”

We ran into New Yorker writer Judith Thurman, who had contributed a crocheted red crop top. She asked us why we were parting with a vintage skirt striped with a deep royal-hued rainbow. (The story that went along with it? Something about the Bennington College costume shop and Sylvia Plath.)

“You should wear it with a leotard and capezios,” Ms. Thurman said. We put a lot of stock in Ms. Thurman’s sartorial advice, not least of all because we’d taken the same tack ourselves on the few occasions we’d worn it. But as it turns out, leotards were really not our thing, as we concluded when we tried on a spotted silk number that Ms. Comey had contributed to the rack.

The slumber party vibe was strong; clothes weren’t the only thing being traded, advice was flowing freely in the fitting room and in the middle of the store, ladies in white sat in a circle getting their hair pulled into a giant joint braid. Our skirt wasn’t the only thing that was reminiscent of college life. We grabbed a gin and tonic from a passing tray, grateful for clear liquid among the all the silk.

Writer Emily Gould decided to part with a floral Betsey Johnson shirt, which she had worn for book events after she published her 2010 memoir. “It seemed cool to me but now it seems girly + not me,” she wrote. Writer Sloane Crosley’s blouse, which she had worn with pleather pants (“I’m sorry,” she wrote) was soon gone, too, either to one of the writer’s fangirls, who are legion, or to someone fond of the circa-2006 sample sale find. Eventually, our striped skirt found a home, as well.

But what of our new duds? Many people debated the torso to leg ratio required to pull off a cotton blue and white Edith A. Miller bodysuit. As we studied it, the owner swooped in, urging us to take it.

Then she eyed our dimensions. “You could chop the bottom of the legs off?” she offered. We passed.

And then there was a woman who brought her would-be wedding dress—she had changed her mind at the last second (about the dress, that is, not the fiancee). A wedding dress stood up at the altar! Women dared each other to take the mid-century satin gown, so we tempted fate. Perhaps picking up a wedding dress at a book party in Soho wouldn’t bode well for our marital prospects? But why not. You can do anything in a wedding dress. One woman suggested we wear it to cook breakfast, and after several glasses of champagne, that seemed perfectly reasonable. 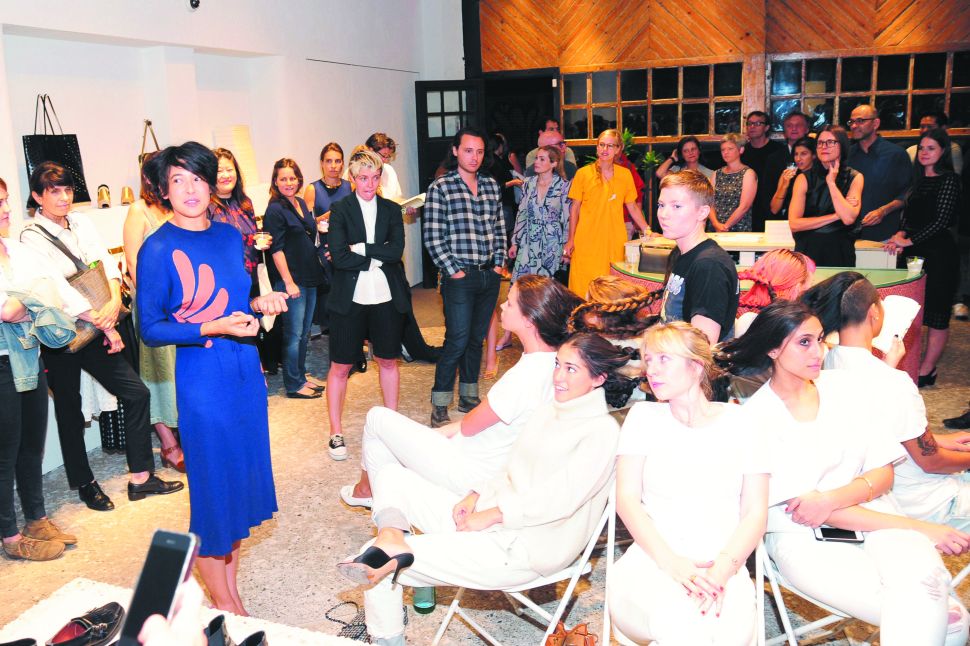