For many women in the restaurant business, putting up with bad behavior is just another part of the job, according to a recent survey that found 90 percent of female workers experience sexual harassment in the workplace.

“Today, in one of the largest and fastest growing economic sectors in the country, being subjected to constant forms of sexual harassment has practically become a requirement of employment,” said workers’ rights advocate Saru Jayaraman, co-founder of Restaurant Opportunities Centers (ROC).

ROC and fellow advocacy group, Forward Together, surveyed more nearly 700 current and former restaurant workers in 39 states, including New York, and found that federal wage laws, which keep workers dependent on tips as their primary income, only make the problem worse.

“The culture of sexual harassment in the restaurant industry isn’t an accident,” said Ms. Jayaraman. “We can point directly to the sub-minimum wage and the fact that the majority of people living off tips are women and their take-home pay is inextricably linked to enduring vile behavior from customers, co-workers, and bosses.”

Tipped women workers in $2.13 states were three times more likely to be told by management to alter their appearance and to wear ‘sexier,’ more revealing clothing, according to the study, while restaurant workers across the board noted that sexual harassment is “kitchen talk,” a “normalized” part of the work environment.

“There is a lot of sexual harassment [but] you just kind of brush it off,” said one New York server who took part in the study. “I just want my tip, I don’t want anything to mess up my tip.”

Half of the women surveyed reported experiencing ‘scary’ or ‘unwanted’ sexual behavior, while 30 percent reported that being touched inappropriately in the restaurant was a common occurrence.

Several respondents said they didn’t report sexual harassment from customers to management because they felt they would be fired or penalized.

“I said to myself, I can’t be putting up with this, let me talk to my boss about it,” said another woman who had been harassed by a customer. “I was kind of surprised by what my boss said…He said, ‘Well, those people pay a lot of money for our services and, I mean, would it hurt to smile a little bit, be a little bit more friendly to them?’ And I was blown away.”

And the effects of the harassment don’t stop when the job does. Women who had previously worked as tipped workers were 1.6 times as likely to live with harassing behaviors in their new occupation as the women who were currently employed as tipped workers, according to the study.

“Countless young women are introduced to the world of work through the restaurant industry,” said Ms. Jayaraman. “And they go on to be more likely to accept forms of sexual harassment as ‘just part of the job.’” 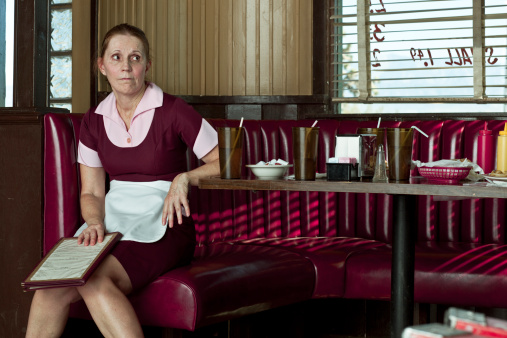